Yesterday, at Alcoa Inc. in Massena, U.S. Senator Charles E. Schumer called on the Environmental Protection Agency (EPA) to fast-track the approval and completion of a Proposed Remedial Action Plan (PRAP) to clean up the Grasse River. Schumer highlighted the importance of this cleanup because Alcoa’s multi-million dollar facility upgrade plans hinge on the completion of river cleanup.

Alcoa, the largest private employer in the North County, has proposed several plans to remove and contain pollutants in the Grasse River that have accumulated from the company’s manufacturing activities over the past four decades. Schumer believes there is a fair option on the table that would cost approximately $200 million. The company has been working cooperatively with the EPA and other stakeholders for a number of years, and now Schumer is calling on the final stages to be completed as swiftly as possible. Schumer pointed out that if the EPA agrees to Alcoa’s PRAP and publishes it for public comment, Alcoa will have a better understanding of the terms and costs of their legal requirements for cleaning up the river. This must be done without further delay, as EPA approval could help boost and speed up the company’s plans to upgrade its manufacturing operations in Massena, which could mean $600 million worth of investments in the North Country. All told, between the river cleanup and the modernization project, Schumer emphasized that this $800 million investment would help retain hundreds of jobs in St. Lawrence County, and create the potential for future manufacturing jobs down the line.

“A ‘greener’ Grasse River could allow more jobs to flow into the North Country, and the Environmental Protection Agency has an historic opportunity to make that happen,” said Schumer. “Once the federal government approves the proposal for the environmental cleanup of the Grasse River, Alcoa and the local Massena community as a whole can move forward towards new investment and upgrades here at the largest employer in the North Country. Not only does Alcoa want to continue investing to rid the Grasse River of harmful pollutants, but the company hopes to double down on their commitment to the St. Lawrence County workforce with an additional $600 million investment, if all goes as planned. The federal government should get on board with that type of investment and loyalty to the North Country, and I am urging the EPA to swiftly approve this plan for a cleaner river, modernized manufacturing plants, and more jobs in St. Lawrence County.”

Schumer launched his effort for the EPA and other relevant federal agencies to approve and expedite the publication of the PRAP, and was joined by Alcoa workers and plant manager, John D. Martin, who are highly supportive of Schumer’s efforts. The EPA’s completion of the river cleanup plan will help the company move forward with its proposed $600 million expansion of its Massena manufacturing operation. Since 1989, Alcoa has already invested $65 million to eradicate the Grasse River’s industrial pollutants. The EPA, New York State Department of Environmental Conservation (DEC), and local stakeholders have been negotiating the terms of the proposal to decrease the level of contaminants in the Grasse River that have accumulated from the manufacturing plants’ discharge over the past four decades. Although Alcoa has demonstrated a quarter-century commitment to cleaning up the river, the release of this PRAP is necessary to ensure that the largest-ever cleanup of the river can commence.

As the largest private employer in the North Country, with over 1,000 manufacturing jobs, Alcoa is a critical fixture in Massena and other local communities. By early next year, the Alcoa board must take action on a proposal to invest over $600 million modernization and upgrade project for their Massena manufacturing facility that will ensure the future of the Massena operations for at least three decades. Schumer highlighted that these facility upgrades, in conjunction with the river cleanup project, means Alcoa could be in line to invest close to $800 million in a North Country community in dire need of a job-creating jolt.

The PRAP includes the capping and dredging of industrial waste in the Grasse River. Alcoa has already exhibited expertise in employing successful capping and dredging methods in the Grasse River over the past 23 years. Specifically, the plan aims to dredge some contaminated sediment from the river basin and cap other segments of the river in order to contain hazardous sediment and isolate pollutants. The Grasse River, a tributary of the St Lawrence River, flows from the foothills of the Adirondack Mountains, through the towns of Canton and Massena in the St. Lawrence Valley, and meets the St. Lawrence River downstream of Massena. Large parts of the Grasse River are popular with anglers, since it is stocked with a variety of trout and bass species. As a result of elevated PCB levels found in fish in the area, the lower Grasse River has been placed under a fish consumption advisory by the New York State Department of Health.

Alcoa Inc. is a Pittsburgh-based company that specializes in mining, refining, smelting, fabricating and recycling aluminum. The company is currently the world’s third largest aluminum producer and maintains operations in 31 countries. Alcoa’s Massena, NY facility is the longest continually operating aluminum facility in the world, currently employing over 1,000 people, and contributing $340 million to the local economy annually through payroll, taxes, and contributions to community events. Alcoa Inc. is also the largest private sector employer north of Syracuse and has been a vital part of the Massena community since 1902. The company is committed to both the human and environmental success of the region, and has been a key player in the restoration of the area along the Grasse and St. Lawrence rivers. Through funding and continuous research, Alcoa plans to monitor and reduce its ecological footprint in the region, while helping to revitalize its natural surroundings. 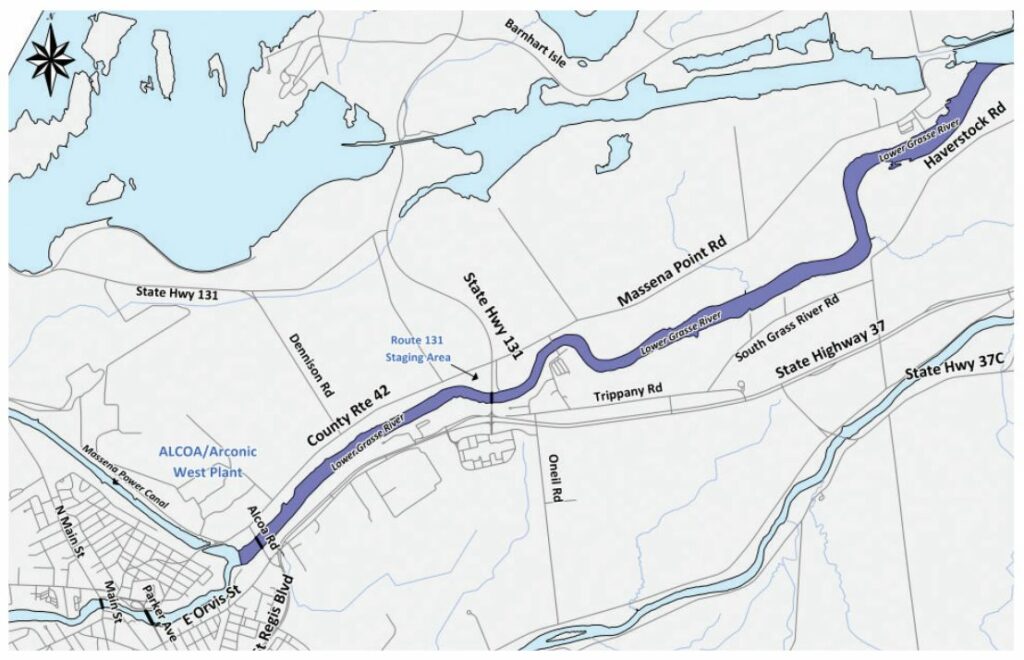