The Nature Conservancy has begun work to reconstruct Half Moon Reef, a once-massive oyster reef that has virtually disappeared over the last century in Matagorda Bay, one of the largest estuaries and most productive fisheries in Texas.

During November and December, crews will install three miles of limestone reef rows to create a 45-acre reef, approximately seven to eight feet beneath the bay surface. The project is being financed with a $3.8 million grant through the U.S. Fish and Wildlife Service’s Coastal Impact Assistance Program, which is administered through the Texas General Land Office.

“This really is an innovative approach to oyster reef construction,” said Mark Dumesnil, associate director of coastal restoration for The Nature Conservancy in Texas, explaining the unique three-dimensional design of the reef and the ‘domino effect’ of benefits it will have. “When you have healthy oyster reefs, you have excellent habitat for small fish and other reef-dependent species, reliable food for bigger fish and water filtration. All of that leads to healthier commercial and recreational fisheries, a first line of defense against storms and hurricanes, cleaner water and a more resilient ecosystem overall.”

Surveys from the early 1900s suggest the reef was once 400 acres. Several factors over the last century have led to its demise, including the release of a major log jam on the Colorado River in the 1930s that sent sediment flooding into Matagorda Bay; the rerouting of the Intracoastal Waterway in the 1940s; and Hurricane Carla, which pummeled the region in 1961.

In addition, oyster shells became a popular construction material in the early 20th century; as dredging intensified, millions of cubic yards of oyster shell were removed from reefs hugging the Texas coast.

This trend also played out on a global scale.

“Today 85 percent of the world’s oyster reefs have disappeared, making oysters among the most imperiled marine species on earth,” said Dr. Jennifer Pollack, lead researcher on the project from Texas A&M Corpus Christi. “The good news is that the Gulf of Mexico is widely considered as the last, best hope for a full comeback.”

As Texas concludes a third consecutive year of drought, Conservancy researchers are also keeping a close eye on how the reef will fare under extended drought conditions.

“Matagorda is one of the largest estuaries in Texas—the freshwater that enters into the bay from Texas rivers and streams is crucial to its health,” said Laura Huffman, Texas state director for The Nature Conservancy.

“We already know the reef can withstand drought conditions but what we want to test is whether it will help the entire bay system better tolerate periods of drought and low freshwater flows.”

“If we can prove that, this work will have relevancy for coastal cities struggling to manage their marine resources amid drier conditions and scarcer freshwater supplies worldwide,” continued Huffman.

A second phase of the project, administered and funded by the Army Corp of Engineers in partnership with the Conservancy, will restore 12 more acres of Half Moon Reef. Additional funders for phase two include the Meadows Foundation, National Fish and Wildlife Foundation, KBR, Shell Oil and El Paso Corporation. 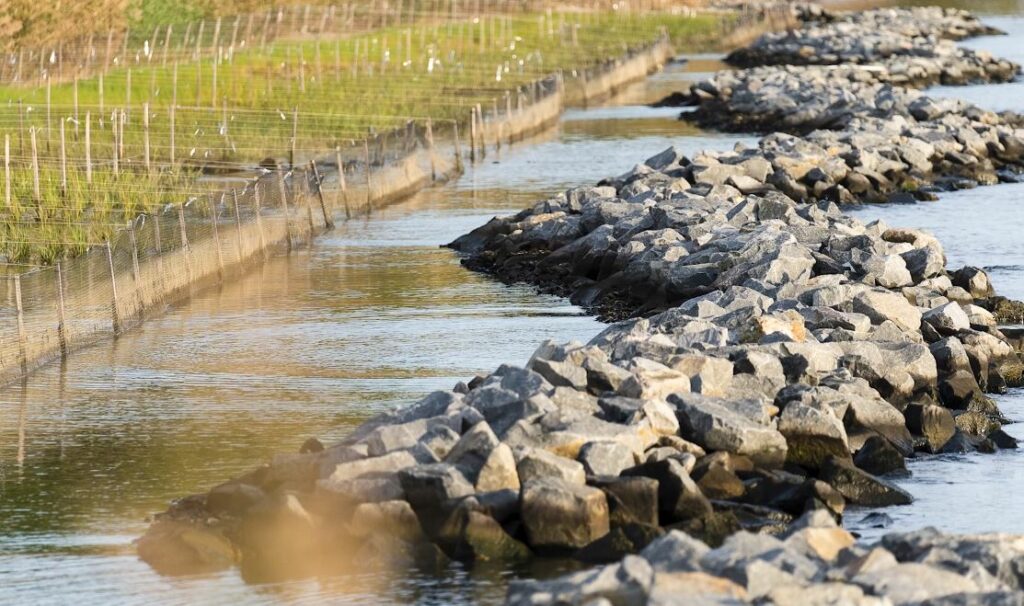