Late last week, the massive CMA CGM MARCO POLO sailed into Charleston, setting the record as the largest ship to ever call the U.S. East Coast and the Port of Charleston.

The docking of the 1,300 feet long vessel at Wando Welch Terminal comes after SC Ports has invested $2 billion in port infrastructure in recent years to handle bigger ships and more cargo for customers.

According to South Carolina Ports, work is ongoing to enhance Wando Welch Terminal, including densifying the terminal, strengthening the berths and investing in new equipment. The terminal will have 15 ship-to-shore cranes with 155 feet of lift height above the wharf deck ready to work container ships later this year.

Additionally, the U.S. Army Corps of Engineers, Charleston District is working to deepen Charleston Harbor to 52 feet; the project is progressing well and is fully funded by state and federal dollars.

The Charleston Harbor Deepening Project achieved a significant milestone this month by reaching 52 feet in the Wando River in front of Wando Welch Terminal.

When the project is fully completed in 2022, Charleston will have the deepest harbor on the East Coast at 52 feet, capable of seamlessly handling fully loaded mega container ships at any time, any tide.

“SC Ports has invested in big-ship infrastructure and terminal capacity to handle the boom in retail goods and ensure a fluid supply chain for customers. The arrival of the 16,022-TEU CMA CGM MARCO POLO highlights the importance of our big-ship strategy,” SC Ports President and CEO Jim Newsome said.

“Investments to deepen Charleston Harbor and enhance the Port to handle bigger ships have been true game changers for our state. The arrival of the CMA CGM MARCO POLO showcases how crucial it is that our port remains a top 10 U.S. container port,” commented Senator Lindsey Graham.

“The Charleston Harbor Deepening Project will enhance transportation efficiencies by removing tidal restrictions, enabling Neo-Panamax vessels like the CMA CGM MARCO POLO to call on South Carolina Ports at any time. Taking a project of this scale and impact from a feasibility study to completion in 12 years and within just six years of its federal construction authorization is a testament to the professionalism and determinization of the Army Corps’ Charleston District, the vision of SC Ports and the cooperation of local leaders.” concluded Lt. Col. Rachel Honderd, district commander of U.S. Army Corps of Engineers, Charleston District. 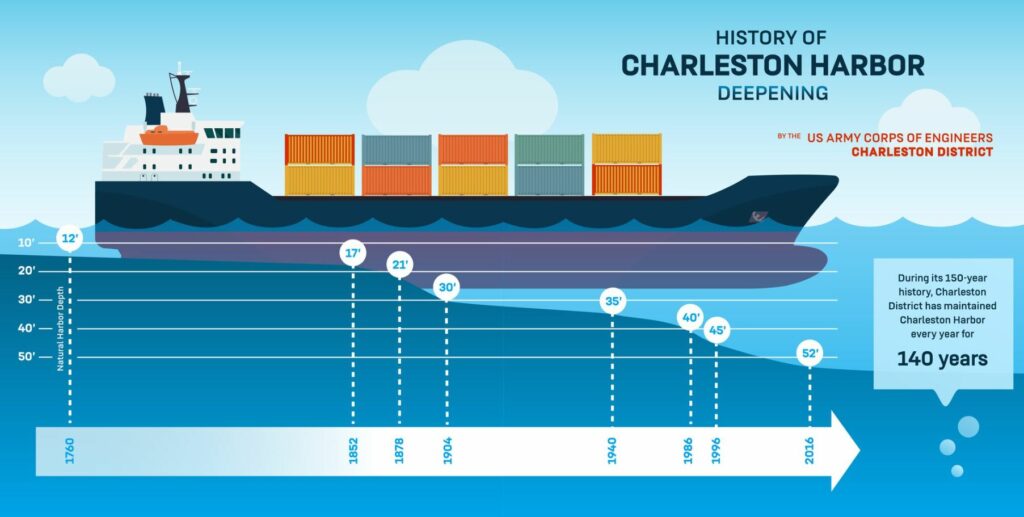