A new report released today on the 100th day of the BP oil disaster details short- and long-term strategies for the Obama administration to make coastal Louisiana less vulnerable to future oil spills and hurricanes, including negotiating with BP for a $5 billion down payment on expected payments for natural resource damages.

The report by Environmental Defense Fund, National Audubon Society and the National Wildlife Federation, “Common Ground: A Shared Vision for Restoring the Mississippi River Delta,” outlines the necessary steps to restore and rebuild an ecosystem that has lost more than 2,300 square miles of wetlands—an area larger than the state of Delaware—since the 1930s.

“The loss of coastal wetlands to oil contamination may speed up today’s alarming land loss, leaving an already-weakened ecosystem even more vulnerable to storms and other man-made assaults,” says the report. “Without restoration, every disaster will sow the seeds of a more devastating disaster down the line, and the region will continue on a path to eventual destruction. These actions will make the entire area more resilient, protecting the people who live there, the industries critical to our national economy, and the wildlife that call the area home.”

The report points out that levees built for flood control and navigation have prevented the river from depositing nutrient-rich sediment needed to build and sustain the delta and surrounding wetlands. Instead, the sediment is now funneled into the Gulf of Mexico. In addition, channels dug for oil and gas extraction have allowed saltwater to destroy huge cypress forests and vast areas of marsh, further accelerating land loss in the region. These legacy channels continue to contribute to wetland destruction long after the companies that dredged them have disappeared, leaving no one to take responsibility for the continued impacts.

The report notes that in recent addresses to the nation, President Obama and his advisors have committed to making the Gulf Coast better than it was before the oil disaster began. In fact, President Obama’s point man for Gulf recovery, U.S. Navy Secretary Ray Mabus, said in early July that the nation needs the Gulf region to be healthy both environmentally and economically and that it is the nation’s responsibility to make the Gulf Coast whole.

“Current sources of federal and state funding are insufficient to meet the enormous challenge,” the report says. “Furthermore, construction of projects in the Louisiana Coastal Area (LCA) ecosystem restoration program Congress authorized in the 2007 Water Development Resources Act (WRDA) depends on yearly appropriations to the U.S. Corps Army of Engineers. The uncertainty of such appropriations creates difficulty and delay. We must act immediately to guarantee the substantial funds needed over the long term to sustain the system and the program to restore it.”

Among other steps, the report recommends:

1. Immediately negotiate with BP a $5 billion down payment on what they will ultimately be assessed for natural resource damages from the spill and create a separate escrow account for that money.

2. Amend the Oil Pollution Act to create a separate fund for Gulf Coast and Mississippi River Delta restoration that includes:

* Payments from BP for natural resource damages under the Oil Pollution Act and the Comprehensive Environmental Response, Compensation, and Liability Act (CERCLA);

* Penalty payments from BP under the Clean Water Act and CERCLA;

3. Seek a supplemental appropriation of $500 million from the Oil Spill Liability Trust Fund for LCA projects and raise the amount available under the trust fund for this disaster to include at least $155 million for the LCA construction program in Fiscal Year 2012.

“The path to restoring [the Mississippi River’s] precious delta begins with reestablishing the river’s long-severed connection to the delta,” the report adds. “When the river and its sediment are harnessed for restoration, the wetlands will be resupplied with sediment, and land can be reborn. It is time for us to commit to renewal, to building this new common ground.”

The Mississippi River Delta, which makes up much of southern Louisiana, is one of the world’s largest and most productive river deltas. Its 3.4 million acres of marsh, swamp, forest, and barrier islands constitutes the largest wetland complex in the contiguous United States.

* The delta is home to nearly two million people and supports rich, diverse communities whose culture, lives and livelihood are inextricably intertwined with the river and its resources.

* Its wetlands are a vast nursery for Gulf of Mexico sea life, including many commercially important seafood species.

* Many threatened and endangered species make their homes in the delta’s habitats, including the Louisiana Black Bear, the West Indian Manatee, the Piping Plover and five species of sea turtles.

* It is the center of the vast coastal Louisiana and Gulf Outer Continental Shelf (OCS) oil and gas operation.

* It is the center of nationally critical navigation systems, including the lower Mississippi River and the Gulf Intracoastal Waterway.

“To meet the challenges of this battered ecosystem and to manage the challenges of responding to the oil spill, the federal government must work urgently in concert with Louisiana’s Office of Coastal Protection and Restoration to revive these restoration efforts,” the report concludes. “A new federal management structure must drive progress on a vision and plan projects in the short-term. With oil continuing to come ashore, the coastal ecosystem does not have the luxury of time: action that gives a new structure to the federal agency effort must be taken immediately.” 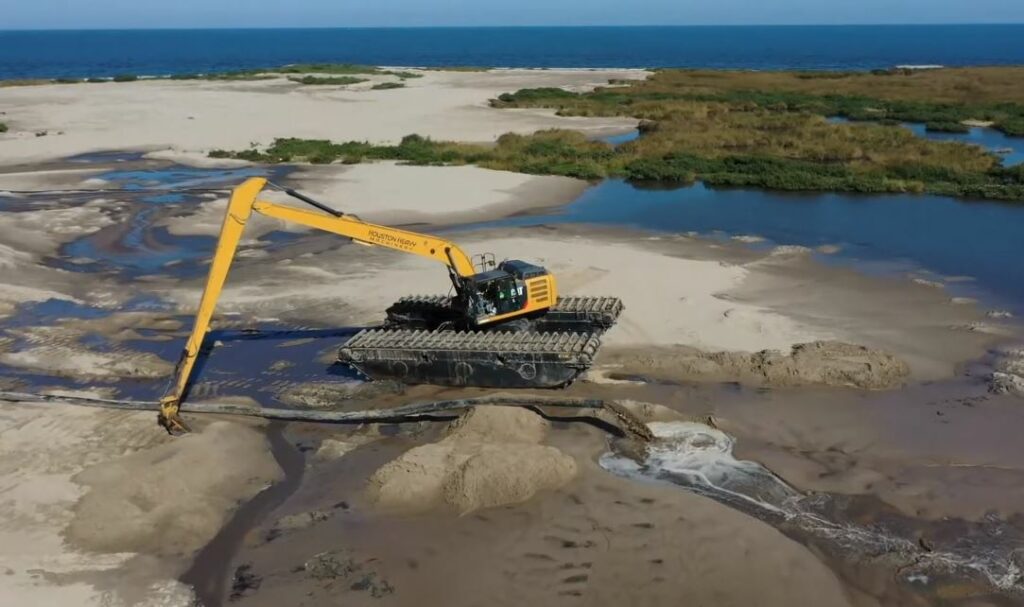