The causeway linking Singapore to the southern tip of the Malaysian peninsula is normally clogged with cars and trucks making the short international journey, but things got particularly bad on Feb. 1, when traffic came to a grinding halt. Thirty-seven trucks were abandoned where they stood on the Malaysian side, just yards away from a customs checkpoint, their drivers having simply walked away. Upon further investigation, it was discovered that they were carrying an illegal substance — but not drugs, illegal migrants, or precious jewels. They were carrying sand.

Singapore’s economy quite literally rests upon maintaining a huge and continuous supply of sand — and smuggling has become a multibillion-dollar trade, driving a huge web of corruption and theft in a country renowned for honest business practices and corporal punishment.

The tiny island nation, one of the 20 smallest states in the world, has enjoyed a phenomenal economic boom since the 1980s. In the space of only 30 years its population has doubled and its GDP has exploded by more than 1,000 percent (making it now the wealthiest country in Asia). Singapore’s economic success is largely based upon the phenomenal growth in its services industry. The country has taken advantage of two factors: its ability to process silicon for use in microchips and electronics, and its positioning as a regional business hub within Asia, connecting industrial leaders and business executives from across the continent.

But the boom times have come at a cost. The country has, quite literally, run out of space. Since Singapore’s independence in the 1960s, its land area has grown from 581.5 to 710 square kilometers. By 2030, the country plans to expand by another 70 square kilometers. That would see Singapore’s land area grow 30 percent from its original size, giving it the same area as New York City.

This added girth requires dumping a mind-boggling quantity of sand into the ocean, in what is known as land reclamation projects. To reclaim 1 square kilometer of land from the sea, up to 37.5 million cubic meters of sand are needed — the equivalent of filling three and a half Empire State Buildings. Singapore’s main airport is built almost entirely on reclaimed land, and one of the largest recent projects is the aptly named Marina Bay Sands project, a five-star hotel and casino on Singapore’s shoreline whose major investors include the owners of the Las Vegas Sands Corp.

There are two types of sand generally used for land reclamation projects: sea sand, which is dumped into the ocean as filler, and river sand, which has a far finer granularity and is a central ingredient in concrete, which Singapore uses in vast quantities to fuel its monumental building program.

Although Singapore is itself an island nation, it ran out of its own sand many decades ago. Today the entire island consists of urban areas or protected-environment sanctuaries. This shortage has fueled a massive industry, worth at least $1 billion between 1998 and 2008. And it’s only growing: In 2008 alone, according to its own figures, Singapore imported more than $273 million worth of sand, more than any other country in the world. But these numbers — which account for only the legal trade in sand — are only the tip of the iceberg.

This insatiable need for sand has created a slew of problems not often associated with this by-the-book country, which is rated by Transparency International as the third-least corrupt country in the world, behind only Denmark and New Zealand. In recent months, however, a number of illegal sand excavation activities have been traced back to Singaporean companies. Whether this smuggled sand entered Singapore through government collusion or willful ignorance is hard to ascertain, but questions are increasingly being asked about how much officials really know about the quantity and provenance of sand imports.

Until recently, the vast majority of it has come from right next door: Malaysia, which lies less than half a mile away across the Singapore Strait. And that’s odd, as Malaysia has had a blanket ban on the export of river and sea sand for more than 10 years, since it discovered that materials for its own land reclamation projects were being illegally diverted to Singapore.

There are no hard figures regarding the extent of the illegal trade between Malaysia and Singapore. The best official figures available come from the United Nations’ Comtrade database, which lists countries’ declared trade figures for a variety of commodities. But even a cursory comparison of its data shows that something is drastically amiss. For example, in 2008, Singapore declared it had imported only 3 million tons of sand from Malaysia — yet Malaysia’s figures show that a staggering 133 million tons of sand were reportedly exported to Singapore despite the 10-year blanket ban.

It’s hard to say whether either figure is accurate, but it’s clear that vast quantities of Malaysian sand are being smuggled into Singapore. A recent report by the Malaysian civil servants union estimates that 41 percent of Malaysia’s officials are involved in some form of corruption. Mohamad Khir Toyo, the former governor of Malaysia’s most prosperous state, Selangor, has even insinuated that his successor is allowing the illegal trade to continue unhindered. “Sand is being stolen every day, and not a single lorry has been seized and no one has been charged,” he said in May. “I suspect certain leaders from a certain party … are protecting the culprits.”

In June, an investigation by the Malaysian newspaper the Star blew the lid off the sand smuggling trade. The paper’s reporters followed a Malaysian dredging company working on the Johor River, about 50 miles inland from the Singapore Strait. The company had won a transport license by claiming it was shipping extracted sand internally, to the Malaysian ports of Tanjung Pelepas or Danga Bay. The shortest route to the destination, however, took ships through Singaporean waters. Once the sand was extracted, the barges sailed downriver to the Malaysia-Singapore border and passed through customs. The barges never made it to the claimed destination — they simply stopped at the Singaporean jetty of Pulau Punggol Timur, presented freshly forged paperwork, and unloaded their cargo.

The newspaper estimates that around 3 million cubic meters of river sand have followed this route since 2007, making smugglers a cool profit of $77.8 million. Understandably, the Malaysian government is not pleased, having been deprived of $11.5 million in tax revenues. But the million-dollar question is how such massive shipments are able to reach Singapore without anyone being the wiser. For its part, the Singaporean government flatly denies that it condones the import of illegal sand.

“The documentation that sand suppliers are required to show include licenses to dredge or extract sand at specific sand locations in the source countries, draft survey reports, and bill of loadings,” K. Senbagavalli, a spokeswoman at the Singaporean Ministry of National Development, said in an interview. “[We verify with] sand concession holders of source countries regularly that the documentation provided by the sand suppliers is authentic and accurate…. To date, the sand vendors have all been able to provide valid documented evidences of clearance from the source countries.”

But this oversight depends on reliable paperwork — and reliable officials — throughout the supply chain. If corruption is as rife as it appears to be within Malaysia, the documents are not worth the paper they’re printed on.

Although the black market Malaysian trade appears to be thriving, Singapore’s addiction requires far more sand than one country can provide. And Indonesia, a vast and sprawling archipelago of more than 17,000 islands (the nearest of which to Singapore lies about six miles to the southeast), has jumped headlong into the breach. Many of Indonesia’s islands that lie within easy reach of Singapore have few or no inhabitants — and Singapore has taken advantage of this geography, going so far as to wipe some places entirely off the map.

Rapacious exploitation, which saw up to 77 percent of the world’s sand dredgers operating in seas between Indonesia and Singapore, soon took its toll. By 1999, some islands had been mined so extensively that plans were being drawn up for sea walls to protect inland citizens from rapid erosion and rising seas. In 2003, Nipah island, which lies on the Singapore-Indonesia border, disappeared completely under the waves, “with only 3 to 4 palms trees visible to mark the island’s location,” according to the local NGO Wahana Lingkungan Hidup Indonesia.

Indonesia’s export figures show that, in the five years before 2002, it shipped at least 150 million tons of sea sand to Singapore in total. But the black market probably accounts for at least double this figure: In 2003, smugglers excavated and shipped an estimated 300 million cubic meters of sand, worth $2.5 billion. In 2007, following Malaysia’s lead, the Indonesian parliament issued a blanket ban on sea sand exports. It was completely ignored, even by the Indonesian government. Over the past five years, a further 24 islands are believed to have disappeared under the waves. Even if officials were serious about stamping out the trade, it’s simply too easy to steal sand from Indonesia’s thousands of miles of unguarded coastlines. All any would-be thief has to do is pick a remote spot where large and loud dredging equipment won’t be easily spotted and work quickly under the cover of darkness. They can return to Singapore safely within a matter of hours and, using forged documents, unload the cargo.

And yet Singaporean officials still profess ignorance. Beyond the enormous variance in official import-export figures, there’s simply no getting around the fact that Singapore’s land mass has grown by leaps and bounds — so the landfill is certainly coming from somewhere. Thus far, they’ve managed to escape the repercussions for a willing complicity in this trade by feigning surprise at bogus paperwork. For the time being, the trade is making all players happy and rich.

Singapore is poised for a bright future: It is booming economically and has positioned itself as a world leader in urban sustainability. But to fulfill that promise, however, it must first swallow an unpalatable truth — that its prosperity has come at the cost of it neighbors’ corruption and environmental destruction. Size isn’t everything; the country’s sterling reputation is now at stake. 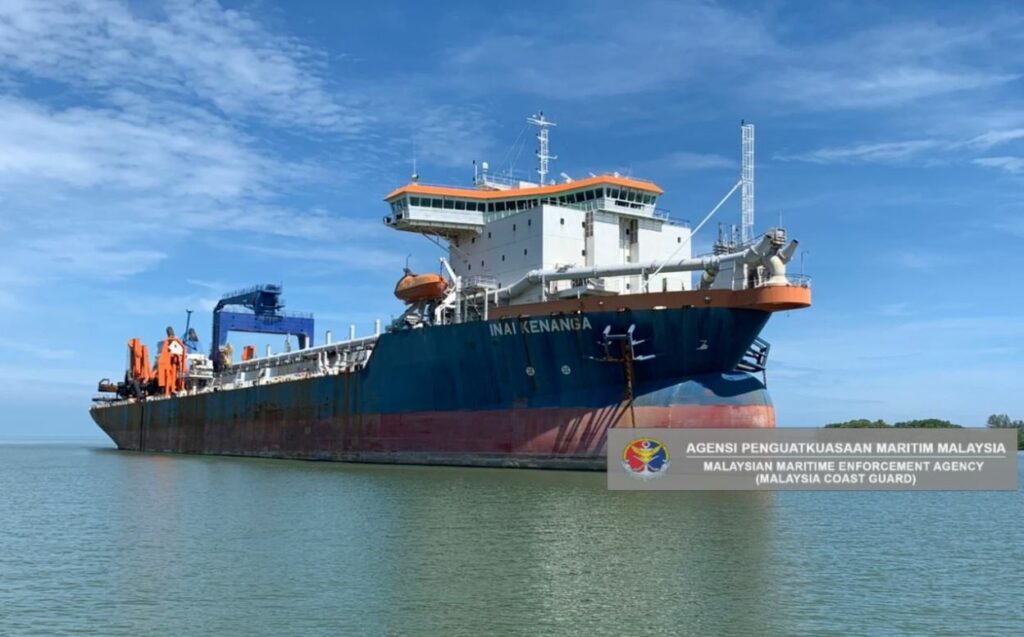