Reliability is Number One Priority on Lincshore (UK)

An excavator formed an unusual yet highly effective partnership with a dredging vessel on the Lincolnshire coast in England last summer.

Working on the Lincshore project, the Hitachi ZX470LCH-3 crawler excavator and trailing suction hopper dredger, Vlaanderen XX, have helped to ensure that future generations can live safely between the resorts of Mablethorpe and Skegness.

The annual Lincshore project was introduced in 1994 after a huge reconstruction programme to install a hard sea defence that followed the North Sea flood and storm of 1953. This disaster affected the low-lying Lincolnshire coastline with 40 people losing their lives as a result of the waves overwhelming the sea defences and causing extensive flooding.

The project is reviewed by the Environment Agency every five years to ensure it remains the best option for flood protection.

The last review was carried out in 2009. It aims to combat the decrease in sand levels and increased risk of flooding caused by coastal erosion. The scheme maintains protection against a one-in-200 (0.5 per cent) year flood risk for 30,000 domestic and business properties, 19,000 static caravans and 35,000 hectares of land.

In addition, the work helps maintain the beaches as tourist attractions – without it there would be little sand.

Vlaanderen XX started work on the Lincolnshire coast in July 2010. By October, the trailing suction hopper dredger had pumped a total of 450,000m³ of sand on to the 20km stretch of beaches between Mablethorpe and Skegness.

Each load from the vessel deposited between 3,000 and 3,200m3 of slurry and the Hitachi ZX470LCH-3 excavator played a vital role to maintain the flow of material on to the beach by helping to create a series of channels and bunds.

The Zaxis machine was also used to lift and connect the pipes, and for general excavation work.

The Hitachi ZX470LCH-3 is owned by Ovenden Earthmoving Co. Ltd., the subcontractor on Lincshore for Dredging International, part of the DEME group. It was delivered by the UK Hitachi dealer, HM Plant, in July 2010 and sent directly to Lincolnshire.

“This is our first Hitachi Zaxis excavator and it has already proved to be impressive,” says Chris Barwick, Ovenden’s Managing Director.

“This is a specialist job, with the emphasis on the operators and the back-up they need. The construction machinery has to be ready when required and therefore reliability is the number one priority.”

Ovenden has two excavator operators working on 12-hour shifts over seven days and seven nights. Dennis Pimblett has driven a wide range of excavators from the Hitachi EX30 mini up to the ZX470LCH-3 and said: “I can’t really fault the Zaxis – it’s smooth, precise and there’s good all-round vision from the cab and the rear-view camera. Health and safety is the main priority on this project, so these features are important.

“I find it to be a productive machine for excavation work on the beach and it manoeuvres well on sand. It is very user-friendly and a pleasure to operate on our long shifts. The engine is reliable and powerful. The low-noise means that it is also good for working on a site that is always close to everyday life.” 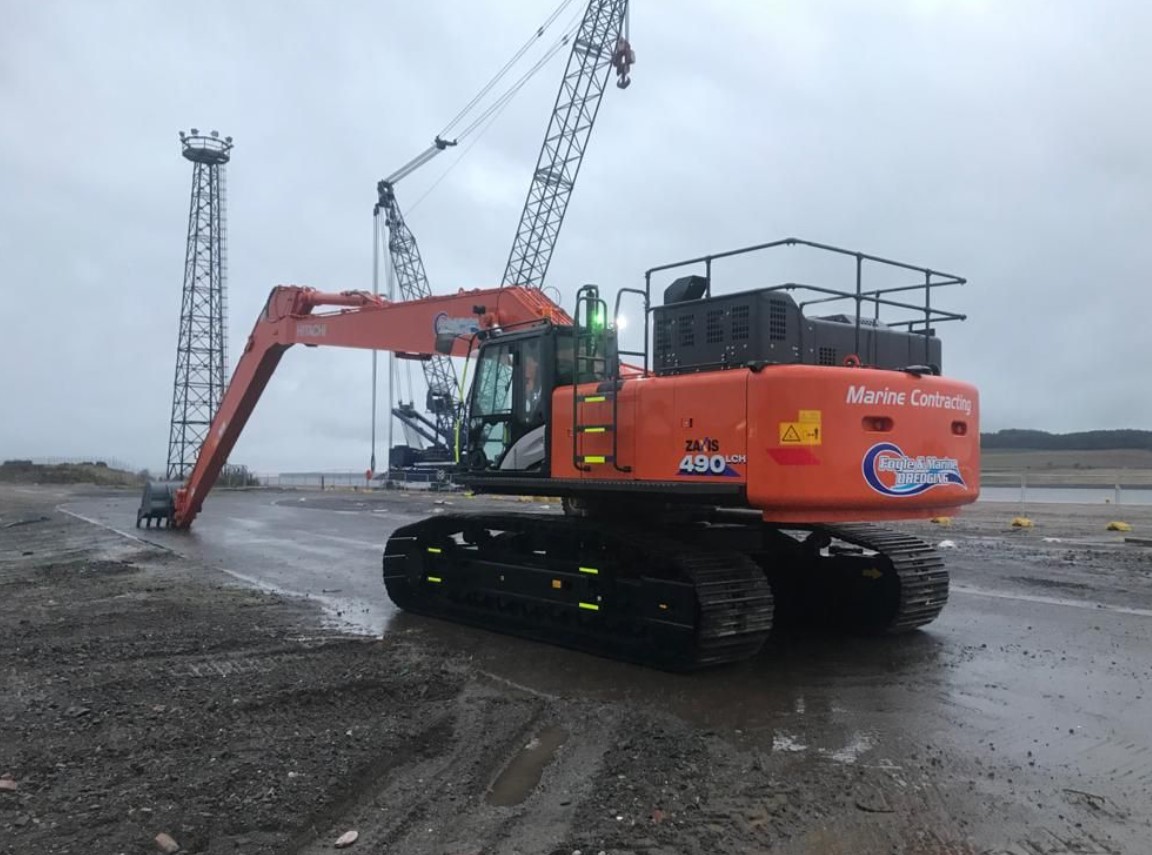