The next step in preparing Portsmouth as the home of the biggest warships ever built for the Royal Navy begins this week.

A specialist rig begins six weeks of drilling on Friday, sampling the sea bed in the harbour and in the Solent.

The tests will pave the way for major dredging work in a couple of years’ time allowing the 65,000-tonne HMS Queen Elizabeth and Prince of Wales safely and easily enter harbour.

The two flagships are 10,000 tonnes heavier than the last traditional-style carriers to serve the Royal Navy – HMS Ark Royal and Eagle, which paid off in the 1970s – and much larger than any current warship based in Portsmouth.

The existing channel used by ships needs to be widened and deepened to accommodate the new carriers. The berths in the base itself need to be excavated and a suitable turning circle provided in the north of the harbour – the draught of the sisters will be 11 metres (36ft).

Survey work was carried out a decade ago – not least on the wreck site of the Mary Rose to ensure that everything of historical importance had been recovered from Henry VIII’s flagship.

In addition a detailed environmental analysis of the harbour and its approaches was carried out in 2004, while the bridge simulator at HMS Collingwood has been adapted to test the new route to prove the carriers can enter or leave harbour in a range of tidal and weather conditions; so far more than 180 simulated arrivals and departures have been conducted.

Capt Iain Greenlees, who’s in charge of the transformation project ahead of the ships’ arrival, said the work by rig Deep River would build on existing understanding of the geology of the harbour and its approaches.

“Work so far has identified this to be route which balances best navigational safety, the lowest environmental impact and cost,” he explained.

“The analysis of these final boreholes will complete our detailed understanding of the work that will be required and allow us to apply for final approvals – and run a competition for the work.”

Queen Elizabeth is due to be launched in 2014 and will arrive in her future home two years later; the Prince of Wales is due to join the Fleet towards the end of the decade.

Next year work will begin to replace telephone cables between Southsea and the Isle of Wight, followed in 2014-15 by major dredging work. Capt Greenlees said around 3½ million tonnes of seabed needed to be moved.

Deep River will drill 27 bore holes to a depth of 32 metres (104ft) along various parts of the proposed route. The rig will be brightly lit and will be operating 24 hours a day.

It will need to dig five holes in the harbour entrance which will cause some minor delays, but Queen’s Harbourmaster Cdr Nigel Hare said every effort had been made to keep disruption to a minimum – including suspending work at weekends – and 50 residents in Spice Island were being informed of the impending work.

“This is clearly important work in the run-up to the new carriers arriving in Portsmouth.

“It’s hoped that harbour users and local residents will understand the relatively short-term inconvenience of the rig, set against the much longer-term benefit of the project to the harbour – and the city.” 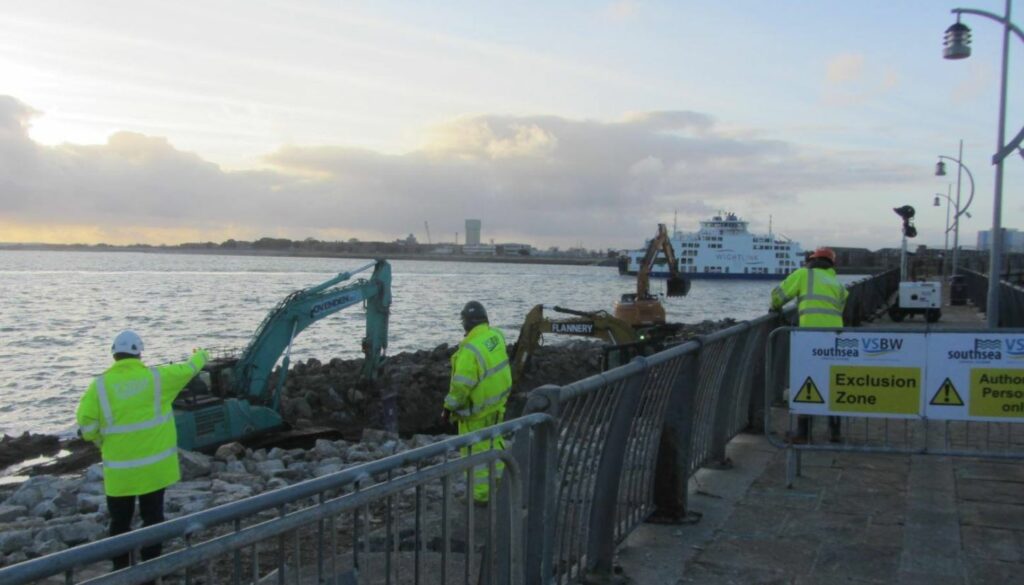