Ekurhuleni Metropolitan Municipality in South Africa is known as the city of lakes. Ekurhuleni has been facing numerous challenges with the state of its lakes especially with the invasive plants and the build up of silt. Many solutions were researched and experimented without long-term answers.

Ekurhuleni Metropolitan Municipality is situated in South Africa’s manufacturing heartland. It is a vibrant, cosmopolitan and culturally diverse region with over 2,5 million inhabitants. The area has around 8 000 industries and is responsible for about 23 per cent of the gross geographical product of Gauteng Province. Ekurhuleni is one of six metropolitan municipalities in South Africa located in the eastern region of the Gauteng Province.

Besides being an industrial hub Ekurhuleni is also very rich in natural resources with wetlands and a number of lakes which were mostly created by the gold mines in the area. Some of these lakes are extensively utilized as outdoor recreational parks.

Increasing urbanization within the municipality has resulted in a range of development related impacts on Ekurhuleni’s lakes and wetlands. This includes concentrated storm water outflows, invasive alien plants infestations, mining and dumping.

Ekurhuleni Municipality has been actively engaging in projects to restore it’s water resources. Various options were explored and after extensive deliberations a decision was reached that the Watermaster Classic was the most suitable equipment to address the pressing conditions of Ekurhuleni’s lakes. The municipality wanted to choose the technology leader in the field because no other machine could offer the same kind of versatility and mobility as Watermaster. Multipurpose Watermaster is capable of doing suction dredging, backhoe dredging, raking and piling -all with the same machine just by changing the work attachment. This means that there was no need to invest in several separate machines for all the different tasks at the lakes.

The Watermaster dredger was ordered In September 2009 and delivered two months later. The first “pilot” dam was Kleinfontein, where hyacinths had solidly covered the entire lake (52 hectares) for years making it inaccessible for the public.

From the wide selection of Watermaster’s work attachments, the Rake was used at the Kleinfontein Dam to remove the hyacinths. The Rake is 2,75 m wide equipped with teeth that penetrate the bottom and dig up the roots of the plant as well as the plant itself.

After a few months of rake work with Watermaster the lake was restored to its former state. The project received public praise and compliments from the Gauteng Provincial Government. Some bird and fish life are also beginning to return to their old habitat after getting rid of the hyacinth infestation.

Since then the Watermaster dredger has worked tirelessly on various lakes in the Ekurhuleni area, removing unwanted vegetation and debris. In addition to Kleinfontein, also Civic lake and Middle lake have already been cleaned.

Although the Ekurhuleni Municipality has finally made a dent in fighting the hyacinths that have plagued their lakes, the work is far from completion. Ekurhuleni’s Watermaster will be busy in the coming years, for there are numerous lakes still to be cleaned in the area. The next projects include Homestead Dam, Brakpan Dam, Alexandra Dam, President Dam and Boksburg lake. 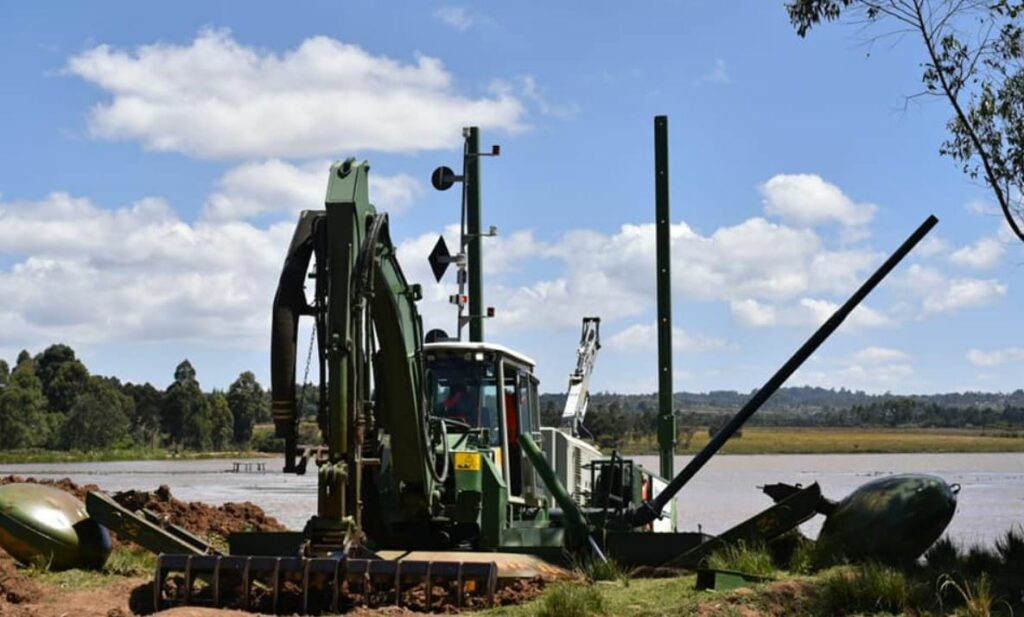