The U.S. Army Corps of Engineers, Galveston District, began work on a $14.5 million jetty repair project at the entrance to the Brownsville Ship Channel with scheduled completion in 2014.

Jetties, also known as stone breakwaters, minimize wave action along the shoreline and prevent sediment from filling the entrances to ship channels along the Texas coast, reducing dredging maintenance cycles.

“This yearlong project will consist of repairing the base of both the north and south jetties to include replacing stones that were moved and damaged as a result of Hurricane Ike,” said Alicia Rea, a project operations manager with USACE Galveston. “Upon completion, the newly-repaired jetties will continue to prevent sediment from entering the ship channel, allowing millions of tons of cargo, including critical commodities that contribute to the economic strength of the nation, to be shipped to various ports.”

A contract was awarded to Conti for more than $45 million in March 2010, with work consisting of jetty repairs in Galveston, Sabine, Freeport, Matagorda and Brownsville, including riprap repairs at Texas City.

“Public safety remains a top priority for the Corps, as the summer brings an increased level of outdoor activities on Texas beaches,” said Rea. “We apologize for any inconvenience this work may cause and ask that residents, beachgoers and recreational fishers pay close attention to signage surrounding the project site in order to minimize safety risks along the beach.”

Corps officials have placed large blocks of stone on top of the jetty to block pedestrian traffic.

“Work has been safely completed on all of the jetty systems, with the jetties at the Brownsville Ship Channel remaining,” said Rea.

According to Rea, the South Padre Island jetties assist the Corps in carrying out one of its primary missions of keeping waterways open for navigation.

USACE Galveston District was established in 1880 as the first engineer district in Texas to oversee river and harbor improvements. The district is directly responsible for maintaining more than 1,000 miles of channel, including 270 miles of deep draft and 750 miles of shallow draft as well as the Colorado River Locks and Brazos River Floodgates. 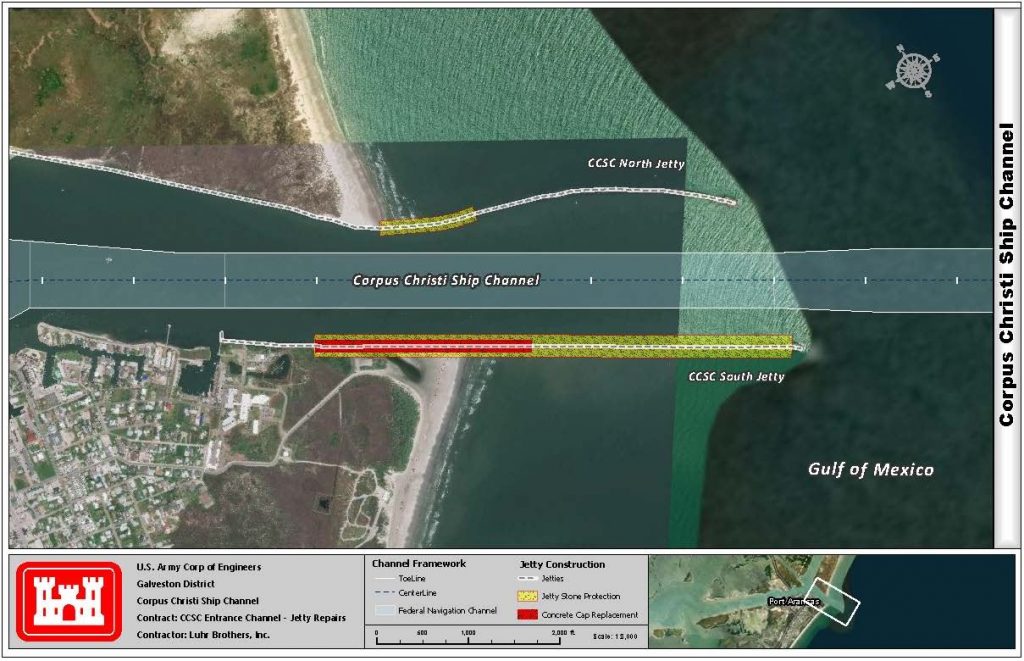