The MSC shipping company is to consolidate all its activities in the Port of Antwerp in the Deurganck dock, on the left bank of the Scheldt. The Port Authority board of directors gave the go-ahead for the move yesterday.

The transfer is necessary in order to permit further expansion by MSC in Antwerp. The shipping company announced at the end of last year that it wished to have a new location below the locks, not only because its present site in the Delwaide dock had reached saturation point but also because of the increasing size of the ships being introduced. The Deurganck dock was the obvious choice, as it is already used by the other members of the P3 alliance of which MSC forms part, and furthermore the alliance plans to make even greater use of it in future.

With a volume of 4.5 million TEU in 2013, MSC is the port of Antwerp’s biggest container customer. However, the company’s Home Terminal in the Delwaide dock was already at full capacity in 2010, so no further growth in Antwerp has been possible since 2011. Indeed, MSC was forced to divert a large part of its growth to other ports in the Hamburg-Le Havre range, so that the level of activity in Antwerp remained static. Despite this, MSC and the other P3 partners confirmed their absolute confidence in Antwerp, so that the port saw its position as a leading western European container port further strengthened.

Antwerp is the only port in western Europe apart from Willemshaven to gain loops with the P3 network. But even without the P3 concept the move by MSC to a new, larger location would be essential, as MSC plans to use Antwerp as a base for its further development in the Benelux region.

The further expansion of the MSC volumes and those of the other P3 partners is of particular significance for the port of Antwerp. Studies have shown that the added value created by MSC is 2.69 euros per tonne. This would mean that the MSC activities generated an annualised value of 154.1 million euros in 2013. MSC is very important for employment in the port too: the activities by the shipping company provided no fewer than 10,602 jobs in 2013. The growth made possible by the move will create an estimated 760 additional full-time jobs. This unique, historic opportunity to facilitate the development of a world player such as MSC cannot be overestimated.

However, in order to make sure that the proposed move by MSC to the left bank of the Scheldt would not stand in the way of other, similar projects that had not yet been announced, the Port Authority issued a national and international call for expressions of interest at the beginning of this year. But no proposals of a comparable scope or positive impact were received.

In the meantime the name MSC Home Terminal will not survive the move: the proposal is for a MSC PSA European Terminal (MPET) on the West side of the Deurganck dock. The PSA DGD joint venture would have a capacity of more than 7 million TEU on the West side of the Deurganck dock. Based on current forecasts for growth – which include not only the expected expansion by MSC but also the additional MSC Home Terminal volumes and the P3/Maersk services – this capacity should quickly be used up. It is therefore all the more urgent for additional space to be made available to MSC and the other P3 partners.

Accordingly, the Port Authority has decided that the largely unused part of the concession on the East side of the Deurganck dock should be reassigned from the current Antwerp Gateway terminal and given in concession to the new MPET joint venture. The concession for this area will be for an initial 7 year period however it will be extended if an equivalent alternative area is not made available to MPET. During that time a close watch will be held to ensure that full use is made of the capacity, with maximum efficiency. In the meantime Antwerp Gateway will still have room for growth in the coming years, even in this configuration.

In preparation for the move, measures will be taken to preserve mobility (i.e. smooth flow of traffic) on the left bank of the Scheldt. Calculations taken from the Environmental Impact Statement for the Deurganck dock at full capacity show that the transfer will not have a negative effect on local mobility. In fact more of the containers brought in by MSC will leave the port again by barge, given the greater transshipment ratio.

If everything goes according to plan then the move by MSC to the left bank should be completed by the end of 2015. Given the strategic importance of the Delwaide dock, the Port Authority will issue a call for proposals to see what opportunities there are for making use of this ideally located deep-sea facility. This all forms part of the Port Authority’s remit of making the most efficient use of the available space in the port. 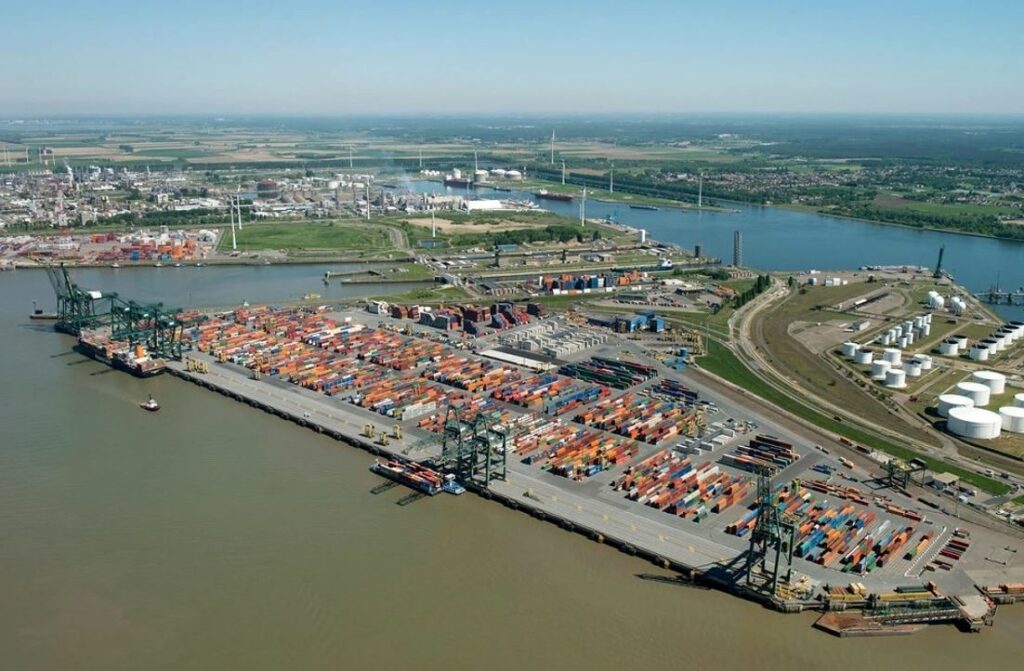