U.S. Senator Mary L. Landrieu, D-La., chair of the Senate Energy Committee and Homeland Security Appropriations Subcommittee, urged Shaun Donovan, Director of the Office of Management and Budget (OMB), to increase federal investment in Louisiana’s waterways during a roundtable discussion with port directors and navigation officials from across the state.

“Long before we began laying railroad tracks and pouring pavement for the Interstates, American commerce and enterprise relied solely on our waterways. They were, and still are, our greatest highways,” Sen. Landrieu said.

“Like all infrastructure, though, our waterways require significant investment and maintenance. The average lock in America is 60 years old. We desperately need more Federal investment in our ports and waterways, and that’s why it’s so important for Director Donovan to meet with navigation and port representatives from Louisiana.”

“The federal budget is tight these days, but I believe we have given the director strong evidence that our ports and waterways are a smart, sound and necessary investment,” Sen. Landrieu continued. “Every year 566 million tons, or 51 million trucks worth of goods, traverse our nation’s rivers and inland waterways. In Louisiana, our ports support one in five jobs. They are Ports of Opportunity to jobs and a stronger, larger middle class.”

“I’m here because Sen. Landrieu, in my very first discussion with her after I was named to this new position, she said to me you need to come down and understand the critical role the ports of Louisiana play, not just for the state of Louisiana, but for the entire nation. I think that message has really come through today,” Director Donovan said.

“Our waterways are a critical asset to the country and as I’ve heard, they are critical in many, many ways that are helping our economy grow. I’ve heard the critical role these ports in Louisiana play in our domestic energy sector,” added Director Donovan.

“I’ve heard about the critical role that they play in our exports, which have grown dramatically over the last five years. In those ways, in so many other ways, in the good paying jobs that the ports create, these ports are a critical, critical asset. And you can rest assured that in this OMB Director you have a partner in Washington, DC,” Director Donovan said.

Director Donovan’s visit comes after Sen. Landrieu secured a commitment for him to come to Louisiana during his confirmation hearing. OMB approval is required before the Army Corps can move forward on critical water infrastructure projects, and the agency plays a central role in the development of the President’s annual budget.

In June, Sen. Landrieu announced that she added a provision that will require the Army Corps of Engineers to factor in the value of goods and equipment used in offshore energy production when deciding which projects to build and which channels to dredge.

That same month, President Obama signed the Water Resources Reform and Development Act (WRRDA), supported by Sen. Landrieu, and gave the green light to deepen the Port of Iberia channel and Sabine-Neches Waterway, along with increased dredging for the Port of Lake Charles.

In January, Sen. Landrieu announced the bill to fund the government for fiscal year 2014 included critical funding for flood control, dredging and other major Corps of Engineers maintenance priorities for Louisiana’s waterways, including the Mississippi River.

Specifically, the bill provided $5.46 billion for the Army Corps of Engineers, an increase of $748 million above the fiscal year 2013 sequester level and $791 million more than was approved by the House.

In 2007, Sen. Landrieu led the effort to successfully override President George W. Bush’s veto of the 2007 water bill. It was the first veto override of Bush’s presidency. In 2006, she passed the Gulf of Mexico Energy Security Act that established revenue sharing to provide Louisiana and oil and gas producing states in the Gulf 37.5 percent of the revenues they generate offshore.

Already, the law has provided $30 million to Louisiana for coastal restoration and protection projects. 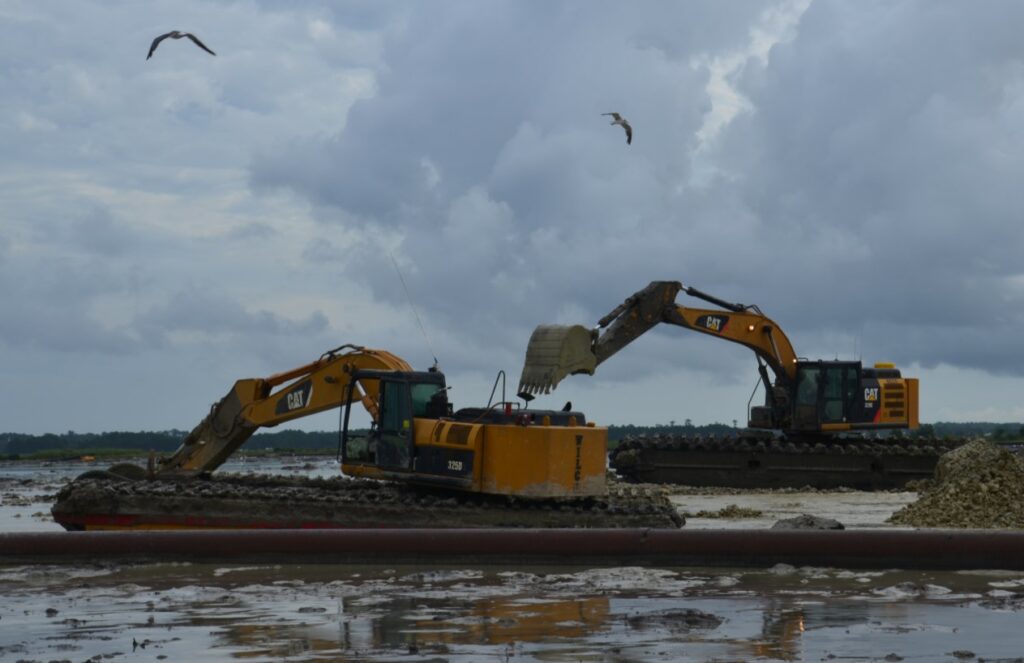