USACE Ready for Emergency Dredging of the Ocean City Inlet

The U.S. Army Corps of Engineers, Baltimore District, has coordinated for emergency dredging of the Ocean City Inlet and Harbor Federal Navigation Channel to begin Friday.

The dredging is in response to reports by mariners of shoaling in the inlet caused by the winter storm that struck Ocean City in late January.

This emergency dredging is being done in addition to previously scheduled dredging activities in and around the channel associated with Assateague Island sand bypass work that will also be taking place starting later in March.

It is anticipated that the emergency dredging, combined with benefits from Assateague Island bypass work, will return most of the channel to its authorized depth dimensions of 10 feet.

Dredge CURRITUCK, based out of the Corps’ Wilmington District in North Carolina, is anticipated to begin dredging in the Ocean City Inlet and Harbor Federal Navigation Channel Friday, March 4, which is earlier than previously-announced estimates.

Crews on the CURRITUCK will work extended hours, dredging on a 24-hour cycle, for roughly one week before moving on to previously scheduled work elsewhere. Dredging in the inlet will be focused on shoaling areas of concern identified during hydrographic surveys conducted in February.

Those surveys estimate that roughly 15,000 cubic yards of sand would need to be removed from the inlet after the storm to fully return it to its authorized dimensions. The CURRITUCK will be able to remove an estimated 10,000 cubic yards while in Ocean City. Additional material will be removed from the inlet beginning later in March as part of previously scheduled Assateague Island bypass work.

Dredge MURDEN, a larger capacity dredge also based out of the Corps’ Wilmington District, is slated to begin regularly scheduled Assateague Island bypass operations later in March. It is currently undergoing maintenance in advance of its work in Ocean City.

The MURDEN will be removing material from in and around the channel, with an emphasis on the ebb and flood shoals in which sand is traditionally trapped while naturally moving south toward Assateague Island.

The regularly-scheduled bypass dredging performed twice a year assists with sediment transport across the inlet south to Assateague Island mitigating impacts to natural sediment transport caused by the Ocean City Inlet and its jetties.

Dredge MURDEN is slated to remove an additional estimated 30,000 cubic yards of material during its two weeks of bypass operations, some of which will come from the channel.

All material dredged during both operations will be beneficially reused and placed south of the inlet off Assateague Island.

Originally, plans had been made for the CURRITUCK to arrive a few days ahead of the regularly-scheduled Assateague Island bypass dredging to dredge shoals in the federal channel and then carry out the bypass work. This would have resulted in crews being able to dredge roughly 5,000 cubic yards of material from the federal channel before the start of bypass operations.

The newly-coordinated approach with CURRITUCK conducting separate emergency dredging and MURDEN carrying out the bypass work later in the month, will result in the removal of an estimated 10,000 cubic yards of material from the channel prior to bypass work.

In total, it’s estimated that roughly 40,000 cubic yards of material will be removed from in and around the inlet during these two operations, with roughly 10,000 to 15,000 total cubic yards of that being removed from within the Ocean City Inlet and Harbor Federal Navigation Channel. 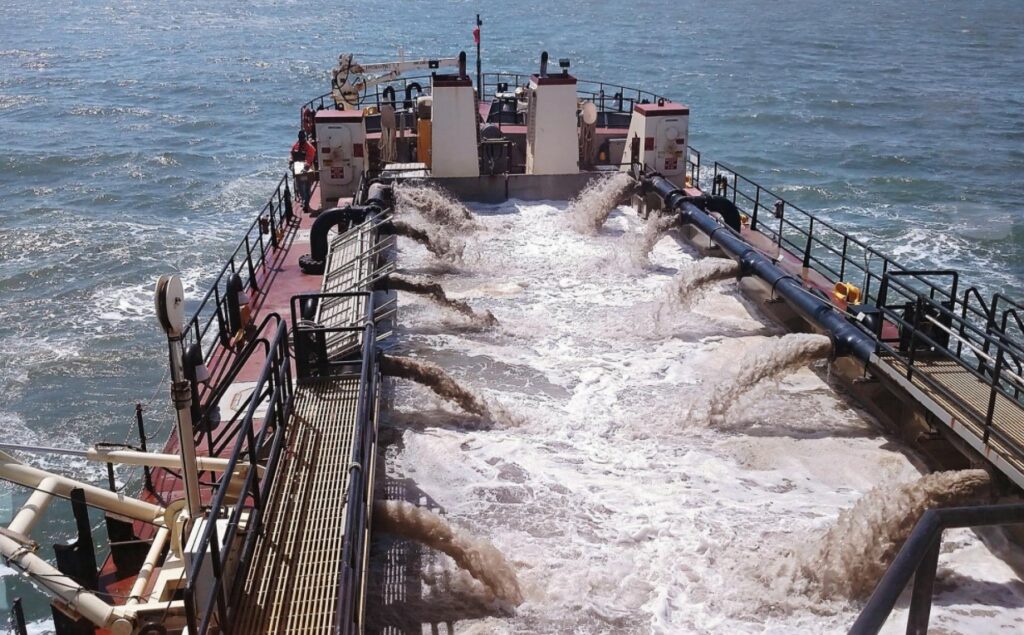