Waterking, a Dutch company involved in the production of amphibious excavators, has reported a very busy 2016, filled with lots of activities and accomplishments.

Enough reasons for Dredging Today to catch up with Mrs Ageeth Roelofs from Waterking to review the business highlights from 2016 and discuss the impact they project for 2017.

A. Roelofs: 2016 has been a remarkable year for us. We had a variety of customers from abroad. We had the pleasure of building and exporting machines to countries like Hungary, Norway and Asia. There have been positive developments  in our products which make them more efficiently and reliable. Waterking has experience growth due to new projects and our innovation.

A. Roelofs: We are always monitoring our own products. Waterking tests on performance, efficiency and safety. We desire improvement and the highest quality of our products.

We designed a new generation series named NG-5 amphibious excavators. One of our biggest developments are the poly-tracks.

Waterking is the first manufacturer of a second generation poly-tracks. We created them with a slightly different shape. The tracks are now build with round edges.

The different shape enhances the maneuverability of the amphibious undercarriage. Also the damage of the soil is more limited then before.

We adjusted the tensioning system for the chains to improve the usability therefor it’s better protected. We slim the chance on damage and corrosion because of this adjustment.

Another improvement is the kind of steel. Our amphibious machines are made of Cor-Ten steel and Hardox. As a result, our machines are eight times more resistant to corrosion.

This year we build a WK 300 NG-5, one of a series of seven. The machine is a complete new range 30/35 ton class amphibious machine.

DT: Our readers would like to find out more about the WK 300 NG-5 special features?

A. Roelofs: The WK 300 NG-5 is the first excavator equipped with te latest Tier4 final motor with an engine power of 270 HP.

The machine has a fuel tank of 1300 liters and meets the highest emission requirements of the EU. The WK 300 NG-5 will be used for nature rehabilitation in the Netherlands. The excavator is perfect for these type of projects because of the strong undercarriage.

Each pontoon is equipped with two travel motors. The boom length is 17,5 meters. At this moment the machine is used in a nature rehabilitation project in Zuidlaren, the Netherlands.

The dredge pump of Damen is wear resistant and directly and only driven by a powerpack. This makes it unique. You can control the powerpack and the dredging pump from the cabin. Both are removable.

When dredging takes place in vegetated swamp areas you can easily remove the debris with the Waterking Multi Dredger by using a bucket or rake. This makes the machine multifunctional, you can dig and dredge without using an additional machine.

DT: Your company recently sold WK 220 NG-5 to a customer in Norway. Can you tell us more about this deal?

A. Roelofs: We sold an WK 220 NG-5, with additional pontoons, to a company in Norway. This year we have been busy sorting out how our machines can be transported as efficiently as possible, without any need of special permits.

The additional pontoons are designed in a way that they easily can be shipped as cargo. It’s possible to stack up the pontoons, without reaching higher then 3,00 meter.

We also delivered dredging equipment for a gas processing project in Central Asia. We were really excited about this. The first delivery included almost 2000 meters of 710 mm high-density polyethylene (HDPE) pipes, a couple stub ends, (towing) flanges and a welding machine.

After the first delivery, another 500 meters of 710 mm HDPE pipes, a couple stub ends and flanges have been ordered by the same customer.

We had a big order this year from an Italian customer for a large project in Central Asia. They already purchased three amphibious excavators from Waterking. The customer ordered another set of four WK machines.

The first time they had a WK 220 NG with Caterpillar upper structure and two WK 250 NG’s with Doosan upperstructure.

A. Roelofs: Through the years we have learned and collected a lot of knowledge about dredging and amphibious equipment, which we are proud of.

We continue to develop and strive for the best possible quality. Our aim of 2017 is to grow even more.

In Western Europe and Russia we are already market leader.

We would like to expand our market to North and South America. 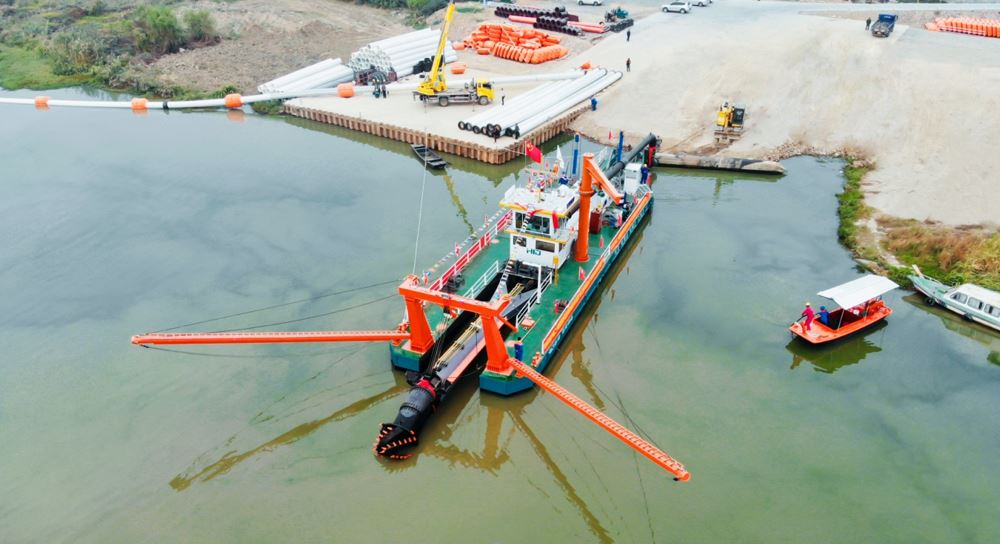