For the past 25 years, the Paul S. Sarbanes Ecosystem Restoration Project at Poplar Island has built island habitat in the Chesapeake Bay.

Since 1994, the U.S. Army Corps of Engineers, Baltimore District, and its partners have been working to restore remote island habitat in the Chesapeake Bay by beneficially using dredged material at Poplar Island.

Rebuilding and expanding to 1,715 acres

While the island’s earliest recorded map from 1846 depicts an expansive island, a much different reality could be seen from Poplar’s shores when the project first began in 1994.

“From 1846 to 1994, Poplar Island’s footprint became significantly smaller mostly due to erosion, deforestation, and sea level rise,” said Tom Laczo, Baltimore District’s Poplar Island project manager. “To keep Poplar Island from completely eroding and save this key piece of island habitat from disappearing, the Corps and the Maryland Port Administration started exploring how to rebuild Poplar.”

By 1994, Poplar Island had eroded to just four acres from an estimated 1,140 acres in 1846. Rather than let the island continue to disappear, the Corps, Maryland Port Administration, and many other federal and state agencies decided to restore the island.

“I don’t think any of us thought it would become this big of a deal; we were just preoccupied with getting the project going,” said retired Baltimore District biologist Mark Mendelsohn, who worked on the project in 1994.

Currently, Poplar Island is set to be 1,715 acres after Congress, in 2007, authorized the project team to expand the project beyond the island’s 1846 footprint. With this expansion, Poplar Island will contain 68 million cubic yards of dredged material upon completion. That’s equivalent to filling over 14 Mercedes-Benz Superdomes with material.

Poplar Island’s 1996 feasibility report first suggested the idea of rebuilding Poplar Island using clean dredged material from the Port of Baltimore approach channels. The environmental study included in the report used input from conservation groups, local governments and other stakeholders to conclude that the rebuilding of Poplar Island was both environmentally and economically beneficial.

The approach channels to the Port of Baltimore need to be routinely dredged to keep the waterways safe for navigation and to keep the Port of Baltimore economically viable for large cargo ships. Finding suitable placement sites for this dredged material had always been difficult, but with the addition of Poplar Island, millions of cubic yards of material has had a place to go since 2002.

While Poplar Island provides a placement site for this dredged material, it also provides invaluable island habitat in the Chesapeake Bay since over 10,000 acres of similar island habitat has been lost in the past 150 years.

“Not only does Poplar Island provide a place for dredged material to be placed, but it’s become a haven for hundreds of species of plants and animals in the mid-Atlantic region,” said Seth Keller, Baltimore District biologist. “The habitat engineered at Poplar Island will continue to provide unique resources in the Chesapeake Bay through improved water quality and valuable habitat.”

Construction first began on Poplar Island in January 1998 with the building of containment dikes in, at that time, the northern part of the island. Then in 2000, a second construction contract began to build the southern part of the island. More than 35,000 feet of containment dikes were built using sand and rock around the last remnants of Poplar Island.

Once the containment dikes were complete, clean dredged material was pumped into the cells. Through much experiment in crust management, the project team developed innovative ways to dry the dredged material and from it, create upland and wetland habitat.

Beginning in 2001, the island already began to attract various bird species and reptiles including osprey, eagles, terns and terrapins.

“Poplar Island provides valuable ecosystem services to the Chesapeake Bay, as well as provides a place for dredged material to keep the approach channels open and a source of jobs for the local community,” said Justin Callahan, Baltimore District’s Civil Project Management chief.

Significant, innovative engineering work went into the development of wetlands and dikes at Poplar Island that have significantly contributed to the restoration goals for the Chesapeake Bay. These efforts have become a model for ecosystem restoration throughout the world.

“In the past 25 years of hard work and smart engineering by the Corps and its partners, Poplar Island has become an international model for habitat restoration and the beneficial use of dredged material,” said Laczo.

Poplar Island’s work to expand the island’s footprint beyond its historical 1846 boundaries began in 2016 by dredging sand from the footprint of the expansion itself. Using material from this source decreased costs and increased dredged material capacity. Rock was transported by barge to the site and, in addition to the sand, is now being used to construct the expansion containment dikes.

Once complete, the expansion will add 575 acres to the north side of the project and will raise the existing uplands to 25 feet.

With optimum funding, the project at Poplar Island will be completed in 2044 and will contain 68 million cubic yards of dredge material, creating 776 aces of tidal wetlands, 829 acres of upland habitat and a 110-acre open water embayment area in the Chesapeake Bay.

Story by Rebecca A Nappi, USACE 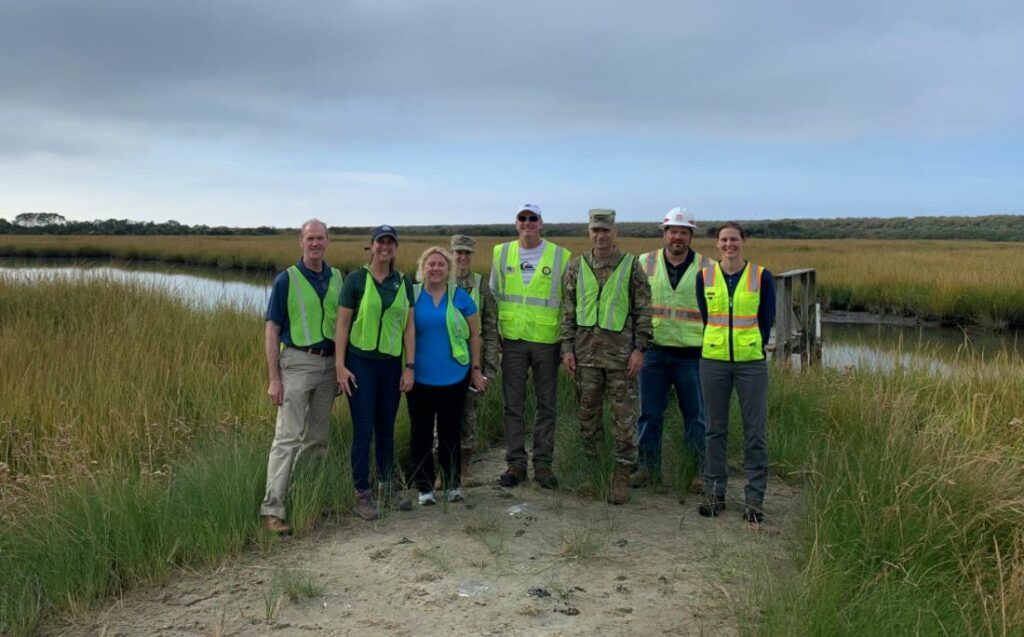