The placement of all 75,000 blocks is part of a major reinforcement project to heighten the dam and making it more robust to withstand overtopping.

The consortium, comprising Van Oord, BAM, and Rebel, has been contracted to complete the reinforcement work by 2023.

The Levvel-bloc is the latest version of the X-Bloc armor unit as designed by Delta Marine Consultants (DMC), a subsidiary of BAM Infrastructure. The original Xbloc has been applied worldwide since 2004 and is used to protect breakwaters and shores against waves.

DMC developed a more advanced version, the X-BlocPlus which has the same wave breaking capacity with less concrete.

Normally, armour blocks, including the X-Bloc, are placed irregularly by dumping them on the slope of a breakwater. DMC designed their latest X-Bloc version in a shape that can be tilted in a regular pattern. The advantages being that the blocks all have the same orientation and the interlocking between the units is not variable.

This single orientation allows a much easier and quicker placement of the 6,5 ton armor unit. In the Afsluitdijk project the X-BlocPlus is used under the name Levvel-bloc.

Next to the 32 km long new wave breaking layer, the reinforcement of the Afsluitdijk also includes the expansion of the drainage pumping station allowing more discharge of IJsselmeer water to the Wadden Sea. Also the two sluices in the dam will be renewed.

The work has been ordered by Dutch national water authority Rijkswaterstaat and is carried out by consortium Levvel, including BAM, Van Oord, Rebel.

After the work has been completed, Levvel will remain responsible for maintenance for a period of 25 years.

The net value of the public-private partnership (PPS) project is 550 million euro. 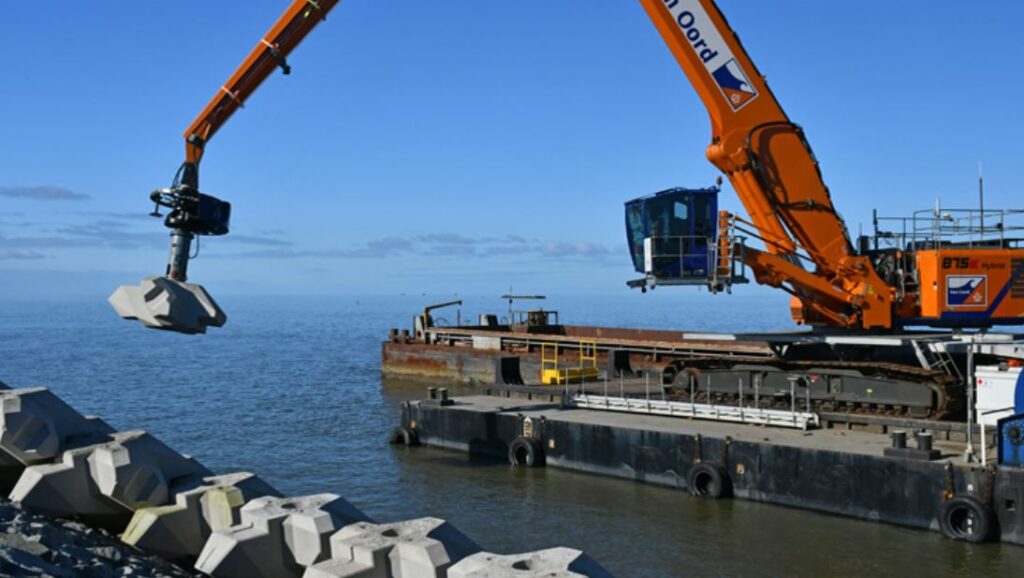