“The rebuilding of one of our most important barrier islands in West Grand Terre, along with the restoration of crucial marshland in Spanish Pass and Golden Triangle, are major components in our long-term approach to creating a sustainable coast,” said Gov. Edwards.

“I’d like to commend CPRA for planning and aggressively advancing these strategic coastal restoration projects to construction. We look forward to watching the continued progress on these projects throughout the year.”

All three projects are being accomplished using $256.6 million in funds resulting from the aftermath of the Deepwater Horizon oil spill.

Those funds are administered and approved for use by the Gulf Coast Ecosystem Restoration Council (RESTORE Act), the National Resource Damage Assessment (NRDA), and the Louisiana Trustee Implementation Group (LA TIG).

The Spanish Pass Increment of the Barataria Basin Ridge and Marsh Creation Project will build more than 1,500 acres of marsh and 132 acres of ridge west of Venice in Plaquemines Parish. The project is part of a large-scale restoration strategy to address land loss in Barataria Basin, where over 10,000 acres of land have been restored since 2007. The estimated total project cost of $100 million is being funded through NRDA.

The West Grand Terre Beach Nourishment and Stabilization project, located in Jefferson Parish northeast of Grand Isle, will address the area’s significant shoreline erosion and marsh subsidence by restoring over 371 acres of beach and dune and 160 acres of back barrier marsh. Using over 2.9 million cubic yards of material, the West Grand Terre project will construct marsh containment dikes and rock breakwaters to allow for land building and increased protection from wave impacts and storm surge. The estimated total project cost of $102 million is being funded through RESTORE and NRDA.

By creating and nourishing over 770 acres of marsh habitat, the Golden Triangle Marsh Creation project will reduce storm surge, increase flood protection and restore estuary habitat in Orleans and St. Bernard parishes. The project will support the New Orleans hurricane protection and levee system by restoring the wetland buffer that acts as the area’s first line of defense against dangerous storm surge. NRDA is funding the estimated total project cost of $54 million. 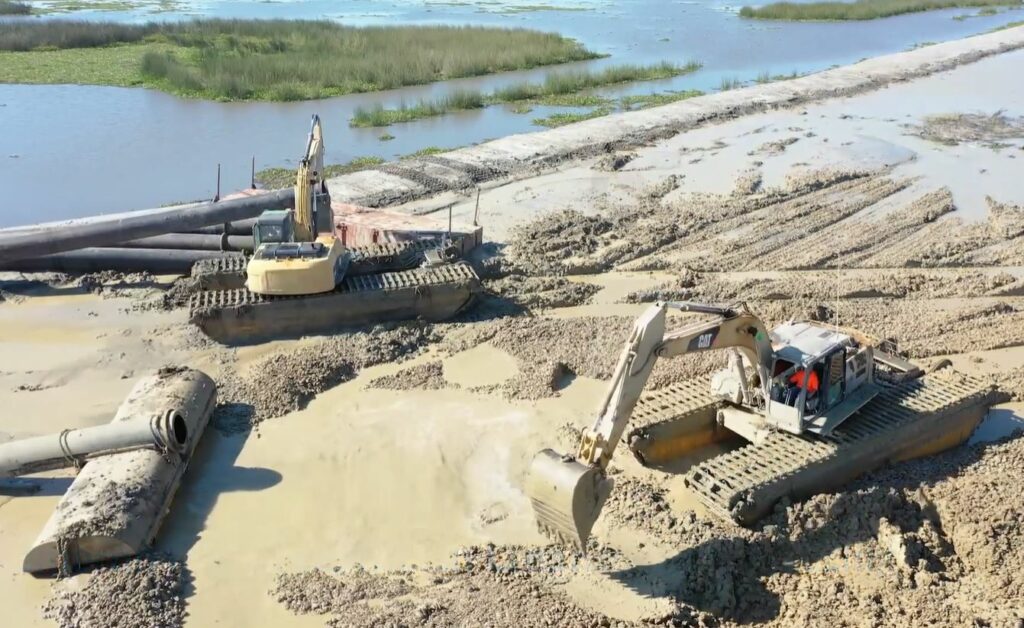