With more than 40 years experience and expertise behind the three tug types, (the Stan Launch 804, Stan Tug 1004 and Stan Tug 1205), the vessels are designed to be strong, highly manoeuvrable and easily manageable for a one or two-man crew.

Damen Product Director Tugs and Workboats, Coen Boudesteijn commented: “The development of smaller workboats has a long history at Damen and has in fact been one of the company’s core activities right from the start of Damen Shipyards.”

Many people know the original versions of the Stan Tugs; the Pushy Cat 42 and the Stan Tug 1, which became extremely popular, especially in the dredging industry, he said. “They have a reputation for quality, reliability and robustness. Even today, vessels from this early period still sail and successfully do their jobs!” However, he admits that until now, comfort and safety were not the strongest points of the Pushy Cats and Mini Cats.

This is something Damen was very keen to change and these issues have now been addressed with the development of the new Compact series.

Mr Boudesteijn added: “Over many decades there has been a lot of contact with dredging companies, towage and salvage operators and other companies in the maritime industry.”

Damen welcomes this input and often refines established designs on the back of it to answer the operators’ demands. This is particularly true of the Damen Stan Tug range in which almost every vessel has been renewed, modernised or improved upon in the last 40 years. “Damen has listened to customers, captains and engineers and their feedback has been included in the development of this latest workboat series.”

Over the past two years, Damen product group, “Tugs & Workboats”, has focused on improving the smaller tugs. The Stan Launch 804, Stan Tug 1004 and Stan Tug 1205 have profited from the knowledge built up during the production of the highly successful Stan Tug 1606 and the Stan Tug 1907, he said. Many details, components and systems inherent in the Stan Tug 1606 have been introduced in the new range.

During the design process a lot of attention was paid to creating the optimum hull design. Damen’s own Research Department made many valuable recommendations and gave advice based on full-scale tests, detailed calculations of structural strength, fatigue, frequencies and wave profiles. In addition, the propulsion system was improved, leading to lower noise levels, a faster speed and a higher bollard pull.

As a result of all this work, the new tugs have emerged as small, compact and very powerful workboats with sleak, clean lines, which fit in very well with the Damen family of larger Stan Tugs and ASD Tugs.

During the trials, the Stan Launch 804, the Stan Tug 1004 and the Stan Tug 1205 put in fantastic performances, even exceeding the expectations of the design team. Mr Boudesteijn said that the vessels have extremely good manoeuvrability and due to their modern propulsion systems, they were absolutely free of vibrations and very quiet in all circumstances.

Just like other Stan Tugs the new range can be completely built from stock. The possibility to introduce optional extras such as a deck crane, flying bridge, radar and extra accommodation can be carried out quickly because these are all held as standard components on stock. “If a customer wishes, a Damen Standard workboat can be delivered within four weeks!” he emphasised.

The Damen Stan Tug range has undoubtedly been strengthened by the new Compact Stan Tug and certainly more than 40 years of experience and knowledge is proving a big advantage in the ongoing development of the series, Mr Boudesteijn stressed. “We are sure that the Compact Stan Tugs will make a valuable addition to the fleet of new customers or existing ones that already have some of the large Damen ASD and Stan Tugs.”

The Stan Tug 1205 has a very robust all-welded steel hull, with 10mm thick hull plating and a 15mm sheer strake. Even the smallest from the series has been built with a strong push bow and the hull has an optimum form to facilitate a smooth inflow of water around the propellers and rudder.

Both the fore and aft decks in the new series have been developed to have as few obstacles as possible to obtain the maximum amount of space for safe working conditions.

The workboats have a bulwark height of 1 m high with wide access doors. Mooring bits, the engine room hatch, ventilation equipment and the exhaust pipe outlets are cleverly built in to facilitate optimum ease of use, safety and simple maintenance.

All the Compact Stan Tugs are provided with lifting eyes and they are equipped with a single anchor, handled by an electrically driven windlass, with the exception of the SLa 804.

Where the 1606 and 1907 still have “tyre” fendering, the smaller Stan Tugs in the series have been equipped with rubber D fendering.

The new Stan Tugs have full, electronic-controlled Volvo D5 and D9 main engines. Thanks to the double turbo’s, the acceleration of these modern vessels is very fast.

An electrically driven Sterling bilge and general service pump has a capacity of 14 cu/m of water per hour. A manual emergency pump is located in the engine room as well.

Engine cooling is provided by a proven Damen system with a closed circuit keel cooling system so the vessel can operate in extremely shallow water without any problems.

In the wheelhouse a modern alarm system has been installed for the main engines and gearboxes, as well as bilge water sensors.

For the 1205 and upwards, electric power of 230V – 24V is supplied by an Onan 18kVA auxiliary generator. A double 24V battery pack, with a changeover possibility, is used for starting the engine and domestic use.

The wheelhouse design of the new 804, 1004 and 1205, follows the standard wheelhouse designs developed for the larger Stan Tugs, with an efficient layout of the control and instrument panels specially positioned with ergonomic principles in mind.

There is excellent all-round visibility, with few “blind spots” because of very large, wide windows. The helmsman’s position and chair are located in the centre by the forward window, with all the important instruments and controls within easy reach.

The complete wheelhouse is mounted on rubber shock absorbers and together with the modern linings and insulating material, this ensures an extremely low noise level of just 55 dBA. The spacious layout also offers comfortable seating and a dining table for two people.

These small workboats are equipped with a compass, GPS, echo-sounder, VHF radio, modern LED navigation lights, towing and pilot lights, as well as a searchlight in the Damen Standard version. A radar is offered as an optional extra.

Both the wheelhouse and additional living space below deck are fully air-conditioned and heated. The Standard workboat is fitted with a galley with cooking facilities, a refrigerator, pantry, shelving, cupboards and a toilet with hot and cold water. As an optional extra, the vessel can be equipped with sleeping accommodation for two. 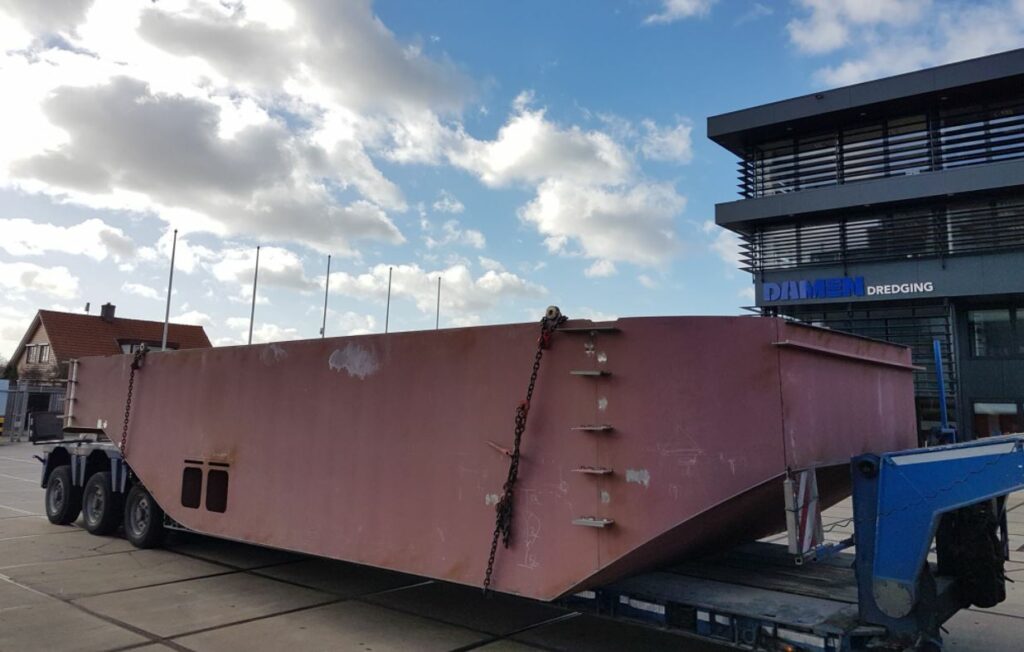