To avoid a repetition of the events that occurred as a result of the Kura River bursting its banks and in accordance with a presidential decree, the Ministry for Emergency Situations has delivered to Baku suction dredgers CSD-500 manufactured by Damen (Netherlands), as well as tugs, supply vessels and a research boat made in the Turkish city of Tuzla.

In order to review the suction dredgers, tugs, supply vessels and the research boat, President Ilham Aliyev arrived at the Yacht Club. Minister of Emergency Situations Kamaladdin Heydarov informed the President of the dredgers, vessels and the boat. It was noted that suction dredgers CSD-500 manufactured by Damen are used in dredging operations in 14 meters below water surface.

The head of state examined the bridge of the suction dredger. It was indicated that the unit has modern navigational equipment. A film was shown about the production of suction units and their use in dredging operations. The crew consists of three people. The total length of the unit is 49.10 meters, while the capacity of its water pumps is 4,000 cubic meters per hour. Depending on the composition of rock in the riverbed, the capacity of the installation during dredging changes. Sucking mostly silt, sand and hard rock, these units carry them by pipeline over long distances. The distance from the point of drilling to the outlet through a direct pipeline is 1,500 meters. By installing additional transfer stations, the distance of discharge can be increased to a maximum of 5 km. The floating pipelines are made of a composite material in Russia, while the pipes to be used on land are manufactured by AZENCO in Sumgayit.

The President was also briefed on the parameters of tugs and supply vessels. It was noted that the power of the tugs and one supply vessels produced in the Turkish city of Tuzla is 1200 and of the other two vessels 900 horsepower (YQ-1, YQ-2, YQ-3). The vessels will tow suction dredgers to necessary distances and ensure their supply. The on-board telescopic crane with a capacity of 10 tons can provide various supply and support functions. The research boat (TC-1) is also produced in the Turkish city of Tuzla. It will conduct research work required during dredging operations.

It was noted that a department for dredging operations would be established under the Caspian Basin rescue service of the Ministry of Emergency Situations. Necessary transport vehicles and technical facilities will be purchased. With this aim, consultations are currently under way with Deltares and Royal Haskoning institutions of the Netherlands, the world’s leading country in the field of flood prevention and dredging. The main base for the operation of the vessels will be in Neftchala, while support bases will be stationed in Salyan and Sabirabad. The state design and engineering institute “AzeriInshaatLayihe” has developed a project on the construction of a quay, warehouses, repair shops and office buildings.

In order to ensure the accuracy of dredging, bathymetry has been completed along the Kura River, including Neftchala, Salyan and Sabirabad Districts. Consistent implementation of these measures is envisaged in Neftchala, Salyan and Sabirabad Districts. To fulfill this task, one suction dredger, one tug-boat and one small tug will operate in each district. The research boat fitted with modern equipment will provide bathymetric work in all three districts.

The groundwater mixture sucked and extracted from the bottom of the river will be discharged into septic tanks through pipes made of composite material that are capable of staying afloat and through polyethylene pipes used on land. Then the water will flow into the river and the soil separated using technical facilities. The design of septic tanks has been completed and their construction will begin shortly. Two tanks with a total area of 202 hectares will be built in Neftchala, four in Salyan and three in Sabirabad. A total of 1.3 million cubic meters of soil are to be extracted in Neftchala, Salyan and Sabirabad Districts.

After examining the dredgers, vessels and the boat, President Ilham Aliyev watched the suction installation in operation. 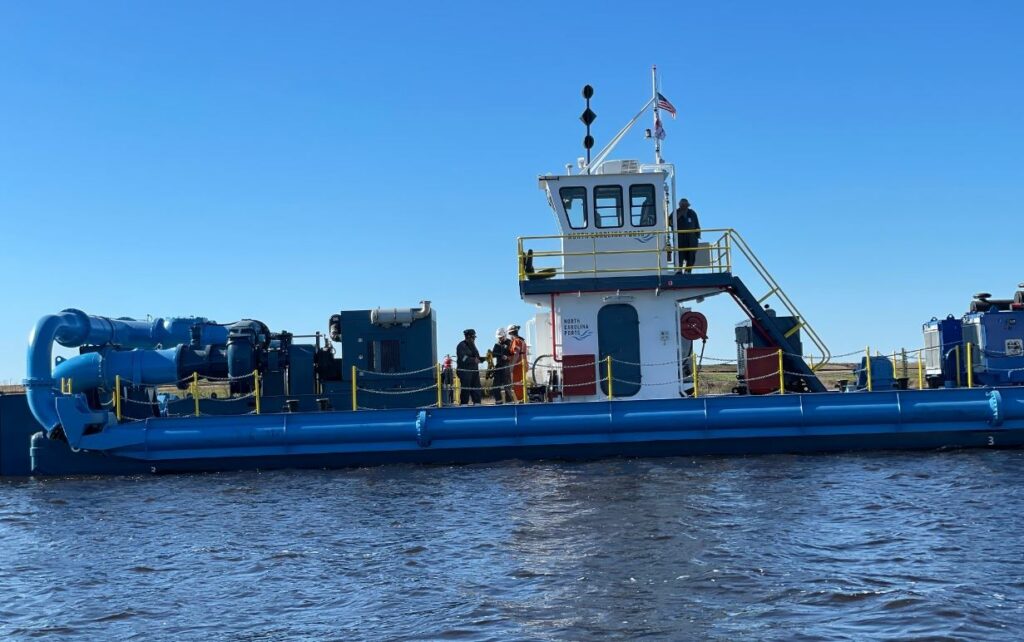