Fire Island Inlet is currently at dangerously low water depths – as low as 4 feet at high tide and 1 foot at low tide. Dredging is the only option for the inlet and would ensure that Fire Island Inlet remains navigable. Schumer and Gillibrand wrote to FEMA Administrator Craig Fugate and Acting Chief of Engineers Major General Merdith W.B. Temple, asking them to combine nearly $23 million in long overdue FEMA replenishment projects for Fire Island and Robert Moses beaches with federal Army Corps “operations and maintenance funding” from the new federal appropriations bill, to jump-start a dredging project of the federal navigation channel. Schumer and Gillibrand said that if federal funding is approved and allocated, it could be leveraged with $7 million of New York Works funding recently designated for Fire Island Inlet.

“We need to dredge this Fire Island Inlet ASAP. With water depths as shallow as one foot, it is downright dangerous for federal agencies to not step in and help solve this problem,” said Schumer. “The inlet’s incredibly shallow depths not only prevents the Coast Guard from effectively protecting our waterways but also hurts our commercial and recreational fishermen. Working with local and state entities, I expect our federal agencies to work together and pool their resources to fix big problems like this so the channel remains open for first responders, fishermen and family boaters.”

“With severely low water depths at Fire Island Inlet affecting the safety of thousands of Long Island boaters, it is clear that the inlet is in need of dredging,” said Senator Gillibrand. “We must immediately pool federal and local resources to fix this urgent problem before the situation worsens.”

The Army Corps of Engineers have estimated to the Senators’ offices that approximately $20 to $25 million is required to commence a basic dredging project. New York State Office of Emergency Management (NYSOEM) has submitted 15 separate funding requests to FEMA that would result in $20.7 million federal dollars to pay for the sand replenishment of severely eroded Fire Island beaches. NYSOEM has also submitted approximately $2.7 million in work sheets for Robert Moses beach projects. These “project worksheets” have been stuck in limbo since the Presidential Disaster Declarations issued for storms in 2009 and 2010. Since the sand for the beach replenishment projects would come from the built-up sediment in the Inlet, Schumer and Gillibrand’s plan would leverage this long overdue funding in the following ways:

– First, FEMA would approve over a dozen requests for approximately $23 million. When combined with the existing $7 million in New York Works funding, this could bring the total dollar amount for the project to over $30 million.

– Second, the Army Corps of Engineers Acting Chief would direct the needed remaining dollars to commence a project from the recently approved “Continuing Resolution” appropriations bill passed by Congress last month. Under the Continuing Resolution, the Corps’ has a 6-month national allocation of approximately one billion dollars in “operations and maintenance funding.” Schumer and Gillibrand would have additional funding from this pot be directed to the New York District for the Corps under this dredging proposal. The Senators’ cited the Moriches Inlet/Cupsogue Beach project as precedent for this type of inter-agency cooperation.

Under this plan, FEMA and New York State would fund the Corps’ with their respective allocations to complete the dredging and replenishment work.

Fire Island Inlet is located on the South Shore of Long Island in Suffolk County, passing through Robert Moses State Park, and is the only major artery between the Great South Bay and the Atlantic Ocean. This inlet is primarily used by commercial and recreational fisherman and the USCG Fire Island Station is located just inside the inlet. Captree State Park, north of the inlet, is primarily used by fishing and dive boats. 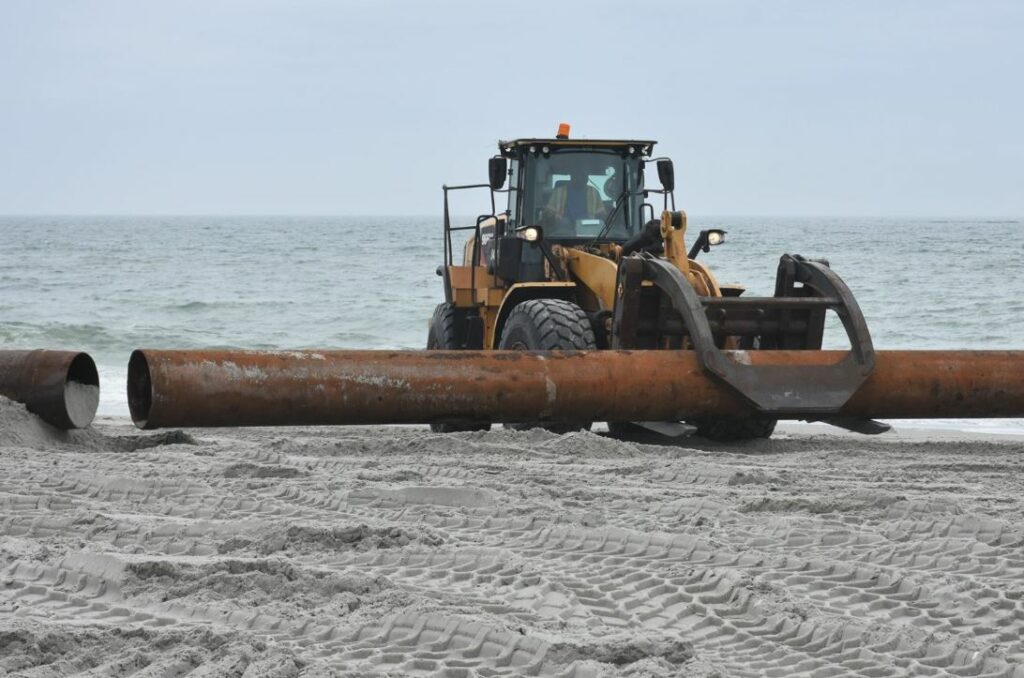