Global ports, key industry players and members of the International Association of Ports & Harbours (IAPH) will return to the UAE capital from 19-20 March 2013.

The third annual edition of the World Ports & Trade Summit – held in strategic partnership with the Abu Dhabi Ports Company (ADPC) – brings the industry together to discuss the changing dynamics of seaborne trade development.

News that major ports across the GCC are set to see growth of more than five per cent by 2017, has seen the region’s maritime trade landscape being reshaped as governments and private sector investment accelerate the development of ‘next generation’ terminal facilities to open up a new era of economic opportunity.

“Abu Dhabi and the Gulf region continue to strengthen its position as a major player on the international ports and trade stage, and with increased intra-regional connectivity on the infrastructure agenda, attention is shifting from West to East as billion dollar initiatives such as Khalifa Industrial Zone Abu Dhabi (Kizad) lead the way for future commercial opportunity and continued economic diversity,” said Capt. Mohamed Al Shamisi, Executive Vice President- Ports Unit, ADPC.

An annual calendar event for global economists, port authorities, terminal operators, shipping companies, global cargo owners and investors, the two-day summit will feature a keynote session followed by five conference sessions giving delegates the chance to interact with the industry’s most authoritative figures and influential minds. The special Africa Focus has been added to the programme to provide delegates with keen insight into the mighty continent’s ports and harbours and the growth plans long-term.

On the first morning, a keynote session featuring a distinguished panel of regional speakers will open the summit, with a discussion on the importance of the region’s economy and crucial geographic position in driving development. Analysis of the changing dynamic of seaborne trade is set to cause lively debate at the session covering maritime and port development in the new global and economic era, with other parallel panel discussions covering port infrastructure, equipment and operational challenges.

“With commercial activities now underway at our flagship Khalifa Port, the emirate has opened up its new gateway. Home to the only semi-automated container terminal in the entire Gulf region, as well as six of the world’s largest ship-to-shore cranes, the commencement of operations at Khalifa Port, and the launch of Kizad, form a logistical hub that is an integral component in the Gulf-wide agenda for ports and trade development into the next decade,” said Capt Al Shamisi, ADPC.

“Khalifa Port will also be the first port in the region to connect with the Etihad Rail freight network, which is forecast to launch in 2015-16. This will not only facilitate cargo transportation within the UAE, but heralds the start of intra-regional networking capabilities across the GCC,” Capt. Al Shamisi added.

The International Association of Ports and Harbours (IAPH) will hold its annual meeting on 18th November, just prior to the start of the World Ports & Trade Summit 2013, with ADPC hosting a reception for IAPH members. Complementary and supporting events rounding out the summit agenda include a dedicated Exhibition Zone where summit delegates can meet with a select number of handpicked exhibitors, and the annual Gala Awards Dinner.

“Social and business networking opportunities remain an important element of the summit, and our eagerly awaited Gala Awards Dinner, as well as hosted site visits to Khalifa Port and other key UAE facilities, are a major draw for local, regional and international delegates,” said Chris Hayman, Chairman of Seatrade, organisers of the World Ports & Trade Summit.

Organised by Seatrade, the World Ports & Trade Summit is held in strategic partnership with the Abu Dhabi Ports Company (ADPC). 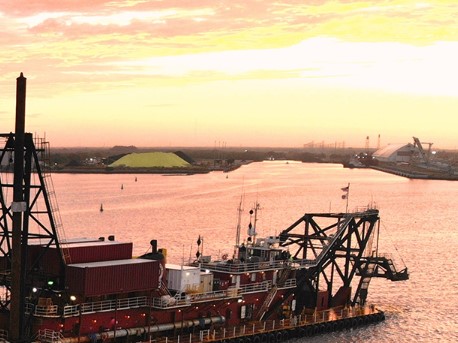