As part of its ongoing commitment to helping New Jersey’s communities recover and rebuild from the devastation caused by Superstorm Sandy, the Christie Administration yesterday took action to streamline state permits for various types of vital rebuilding projects, a move that will aid reconstruction of impacted homes and businesses, assist the recovery of marinas and shellfish industries, help make coastal areas more resilient in future storms, and expedite dredging of storm-impacted private lagoons and marinas.

Through emergency rules filed today with the Office of Administrative Law, the Department of Environmental Protection (DEP) is eliminating unnecessary red tape by enabling various types of projects to proceed under less cumbersome permit procedures, including permits by rule and general permits. At the same time, the processes put in place will not compromise protection of coastal resources and will help ensure the rebuilding of a more resilient New Jersey coastline.

“Rebuilding from Superstorm Sandy is one of the greatest challenges New Jersey has ever faced,” DEP Commissioner Bob Martin said. “The Christie Administration is committed to taking every step possible to help our communities become stronger than ever from this historic storm, including eliminating unnecessary red tape that would needlessly impede the important work ahead. These common sense changes will make it easier for our residents and businesses to continue on the road to recovery while ensuring continued protection of natural resources.”

These important changes will help property owners, businesses and municipalities rebuild more efficiently by eliminating or reducing time needed for DEP reviews. It will also save them fees and costs associated with more complex permit requirements.

The activities regulated by the simplified permit process are for reconstruction activities that are occurring largely on the same footprint or involve minimal additional environmental impacts. In many cases, this rule proposal will provide significant environmental benefits and better prepare coastal communities for future storms. For example, in advance of the impending 2013 Atlantic hurricane season, the rule proposal allows for use of permits by rule for necessary beach and dune maintenance.

Permits by rule recognize that the projects being undertaken are minor in scope and have no environmental impact.

Immediately after the storm, the Christie Administration took swift action to ease red tape for local governments that needed to make emergency repairs to public infrastructure such as roads, bridges, bulkheads and culverts. The Administration more recently adopted a permit by rule process for property owners who rebuild to new statewide elevation standards in flood hazard zones.

Now the Administration is taking decisive action to help businesses and residents more easily get through the DEP’s regulatory process for a variety of other projects through amendments to Coastal Area Facility Review Act (CAFRA) and Waterfront Development Act rules. DEP’s environmental standards will remain in place and will be enforced.

* Establishing a permit by rule for placement of sand fencing to help create and stabilize dunes and to remove sand from underneath boardwalks. The emergency amendments will expedite the rebuilding of residential and commercial structures by:

* Providing for a permit by rule for reconstruction of damaged residential or commercial structures in Waterfront Development areas that are outside the CAFRA zone, primarily Raritan Bay and the Newark-New York Harbor complex. Such rebuilding is already exempt in the state’s CAFRA zone, which hugs the coastline from Sandy Hook south to Cape May Point and north again along the Delaware Bay to Salem County.

* To help property owners make their buildings safer when feasible, the rule changes the current individual permit requirement to a permit by rule for lateral or landward relocation of the existing footprint of a structure. Expansion must be no more than 400 square feet.

* Eliminating the need for a permit to elevate a bulkhead, dock or pier as part of repair, replacement or reconstruction, as long as this is done in the existing footprint and not over wetlands. This will provide more resilience in future storms. The rules also provide flexibility to allow marinas and other small businesses to enhance their operations without coming to DEP by:

* Changing current Individual permits to permits by rule to allow marinas to reconfigure docks, wharfs, and piers within their existing leased areas.

* Allowing a permit by rule for construction or installation of boat pump-out facilities.

* Changing current individual permit requirement to a general permit for construction of support facilities. The emergency rules also contain provisions to aid the recovery of the shellfish/aquaculture industry by:

* Allowing for a permit by rule for placement of certain land-based structures instead of an individual permit.

* Allowing for a permit by rule for placement of predator screens, shellfish cages and other minor activities.

* Establishing a general permit for various commercial aquaculture activities, such as placement of shell. Finally, the rules expedite dredging after a storm event for which the Governor has declared a State of Emergency, by:

* Allowing general permits instead of individual permits for dredging of man-made lagoons impacted by storm events.

* Replacing individual permits with general permits for removal of sand and gravel deposited in the water as a result of bulkheads damaged by storms.

* Allowing general permits instead of individual permits to dredge marinas of materials deposited from storm events.

* Eliminating the requirement for a CAFRA permit for rehabilitation and use of existing dredged material management areas within the same footprint. 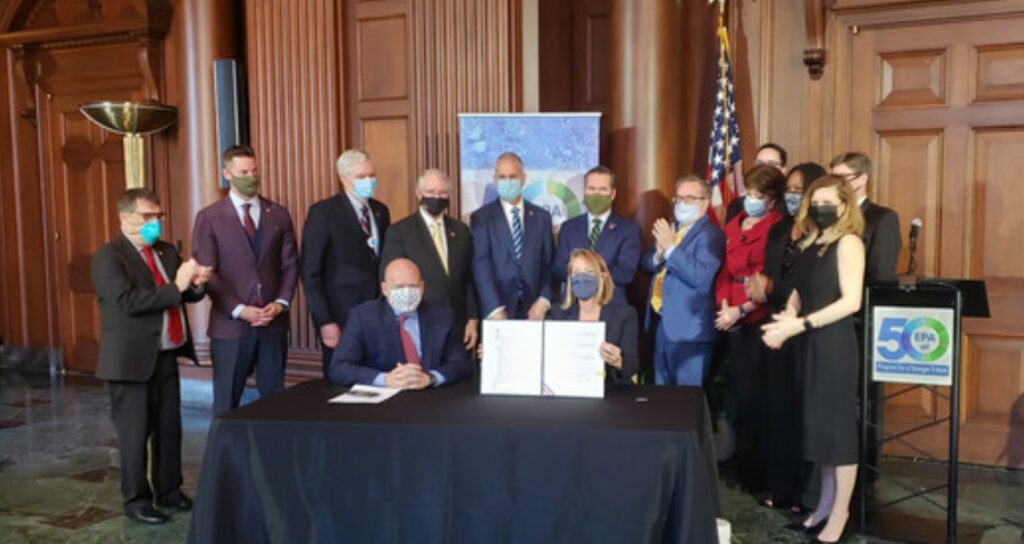