The U.S. Army Corps of Engineers, New York District has awarded a $7.3 million contract to Great Lakes Dredge & Dock Company of Oak Brook, Ill., to place approximately 600,000 cubic yards of sand along the beach at Coney Island in the area of the previously constructed coastal storm risk reduction project there.

The work is being carried out to provide additional coastal storm risk reduction for the community using the Corps of Engineers statutory authorities to restore the federally constructed project at Coney Island that was constructed in the 1990s in partnership with the state of New York and New York City.

The roughly 600,000 cubic yards of sand being placed through this contract will be dredged from nearby Jamaica Bay Inlet leading into Jamaica Bay, helping to improve safe navigation in addition to restoring coastal storm risk reduction for the Coney Island community.

“The Army Corps of Engineers is excited to award this contract for the placement of sand at Coney Island which is a central part of this coastal community and its economy,” said New York District Commander Col. Paul E. Owen. “This engineered beach helped reduce impacts from the Atlantic Ocean during Hurricane Sandy and we look forward to restoring it back to its design profile so it can continue to mitigate the impacts of future storms.”

Everything the U.S. Army Corps of Engineers does must be tied to a statutory authority and this work at Coney Island is the result of two statutory authorities, one previously existing and one new since Hurricane Sandy.

Through the Disaster Relief Appropriations Act of 2013 (the Sandy Relief Bill, or PL 113-2), the Corps of Engineers is authorized to restore certain previously constructed projects impacted by Hurricane Sandy to their original design profile. Through this legal authority, the Corps of Engineers is authorized to place the additional sand at Coney Island to restore the project area to its original design profile. PL 113-2 also allocated the funds for the coastal restoration work.

Construction work on the beach will likely begin in August depending on how long it takes to mobilize equipment and get set up. Work on this contract will likely be completed this fall.

While restoration work is going on, there will likely be rolling closures of roughly 1000 foot wide sections of the beach where construction work is active, but the Corps of Engineers will make efforts to limit the impacts of the ongoing work on recreation without compromising public safety. Closures will be closely coordinated with the New York City Department of Parks and Recreation.

“While the beach at Coney Island still looks full and robust, this repair work is important to ensuring the engineered beach continues to provide coastal storm risk reduction to the communities behind it,” Owen said. “This sort of work is ultimately a construction project and as such we must be mindful of safety in the areas where work is ongoing. We will work with our partners in New York City Parks to coordinate the beach closures and limit the impacts to recreation, but we need to balance that with the importance of providing increased coastal storm risk reduction to the community to help reduce the risk from future storms.”

The coastal restoration work at Coney Island is part of a larger U.S. Army Corps of Engineers effort throughout the northeastern United States to place more than 26 million cubic yards of sand to restore coastal storm risk reduction projects impacted by Hurricane Sandy. More than 7 million cubic yards of that will be placed at coastal storm risk reduction projects in the state of New York, including at Rockaway Beach and at project sites along the south shore of Long Island. 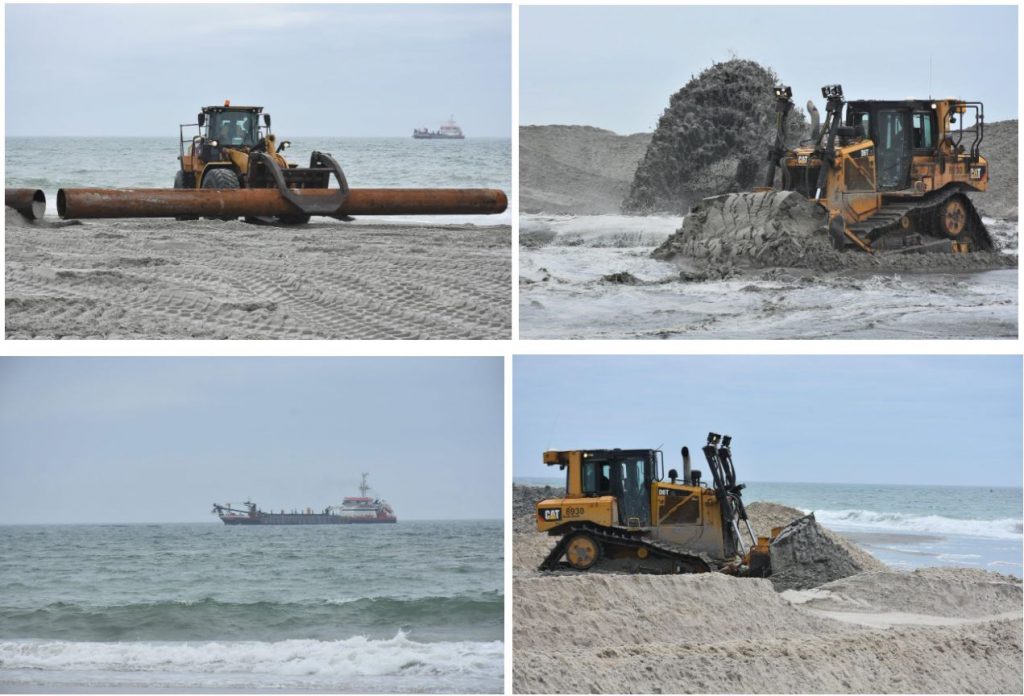