Associated British Ports (ABP) has recently appointed Boskalis Westminster to carry out major dredging work in the approach channel to the Port of Southampton.

Work on the £30m contract is due to get underway shortly, with the new facilities at Southampton’s container terminal due to open in the first quarter of 2014.

The dredging works will:

– improve the safety of navigation;

– improve the ability of vessels to pass each other in the approaches to the port;

– increase the marine tidal access window for large vessels; and

– safeguard existing direct and indirect port-related jobs by ensuring that the Port of Southampton remains a competitive and viable deep-sea port into the future.

The dredging is intended to deepen sections of the 40km channel linking the port to the English Channel.

A total volume of approximately 3 million cubic meters of hard clay, sand and gravel will be removed over a 12-month period along the route, from the Nab Channel to the east of the Isle of Wight, through the central Solent and extending as far as the container terminal in the Test Estuary. The material will be taken to a licensed deposit ground, located in the English Channel to the south east of the Isle of Wight.

Fareham based Boskalis Westminster will use medium sized trailing suction hopper dredgers along with backhoe dredgers to carry out the work.

The main navigational channel used by commercial shipping will be deepened from a current minimum depth of 12.6m, at various points along its length of 25 nautical miles. The channel will also be locally widened in some areas to make it easier for vessels to pass one another as they enter and exit the port

ABP received consent from the Marine Management Organisation (MMO) earlier this year to improve the marine access to the Port of Southampton with an extensive programme of dredging.

The dredging, in Southampton Water and the Solent, is part of an extensive programme of investment centred around improving the capability of the port to receive the largest vessels in the world, long into the future.

Four container cranes, together worth £28m, are now under construction, ready to be installed on the new 500m quay designed to accommodate the latest generation of ultra large container vessels.

Southampton Port Director Doug Morrison said: “The dredging is the final piece in the puzzle for the port’s ambitious plans to develop its container business and remain at the forefront of the industry in the UK.

“We already have the famous double high tide that ensures we are able to offer an impressive tidal access window and this dredging work will extend this even further.

“We have already been doing fantastic work to ensure our ship turnaround times and crane rates are the best in the country and now we can remain open to calls from the very biggest ships for even longer. It makes Southampton an unbeatable package for the shipping lines and helps to secure thousands of local jobs that rely on a successful port.”

Southampton has been ranked the most productive port in Europe and the number one performing container terminal in the UK, according to an independent study rom the Journal of Commerce.

ABP has proposed a series of measures to minimise the effects of the works on the environment. As well as managing water quality and monitoring sediment levels, a compensatory intertidal habitat scheme has been created at Cobnor Point in Chichester Harbour. The scheme will also provide a new home for water voles, a protected species native to Britain’s coast and inland waterways

ABP and Boskalis Westrminster are currently working with the MMO in an attempt to secure the necessary consents for the potential beneficial use of some of the dredge arisings.

A spokesman for Boskalis Westminster said: “Boskalis Westminster are very pleased to have been awarded the Southampton Approach Channel Dredging Contract continuing the partnership with ABP Southampton that commenced with the successful completion of the Marchwood Widening project earlier this year. This will be a technically challenging project and we have already started to mobilise the necessary monitoring equipment that will allow us to start dredging works at the earliest opportunity. We look forward to working with the ABP Southampton team and to completing a successful project.” 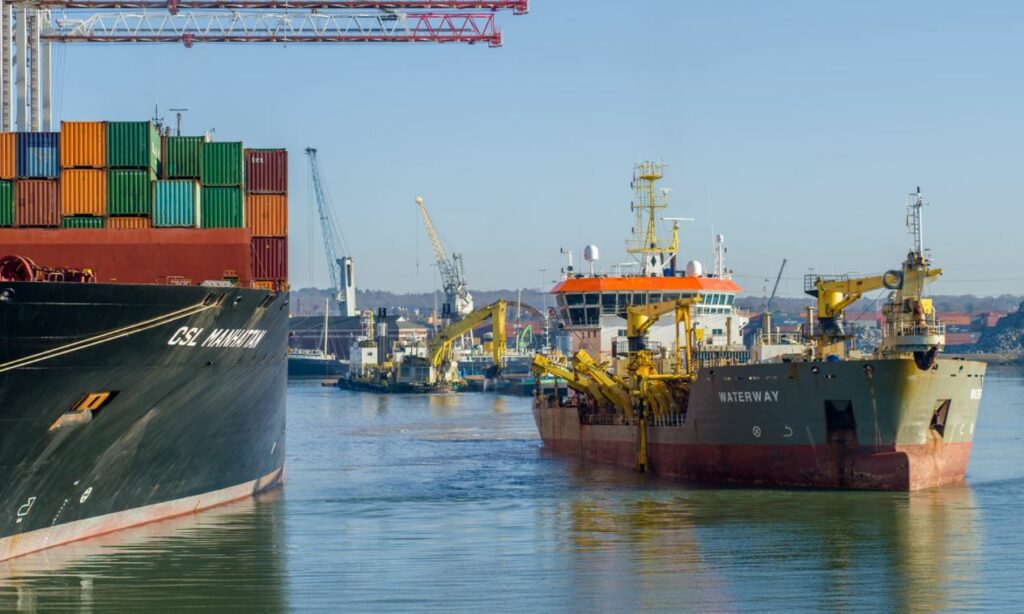