HR Wallingford is to undertake physical modelling studies for a major breakwater which forms part of the proposed port expansion of San Antonio, Chile.

According to the company, the recently awarded Outer Port project – known as the Puerto de Gran Escala (PGE) – represents a major expansion of the existing port infrastructure of San Antonio. The proposal involves staged development of the port over a 19 year time span, with an estimated overall cost of $3.4 billion.

The construction of the new breakwater to shelter the terminals involves a first section perpendicular to the coast, approximately 1.5 km in length, followed by another section of about 2.4 km long running parallel to the coast, for which over 1.8 km² of land will be reclaimed.

Daniel Roth, Project Director, San Antonio Outer Port, said: “The physical studies will allow us to examine phenomena that require more detailed analysis in a reduced scale physical model, and which the computer modelling is not able to represent with the same level of precision.”

“The result of this study will enable us to confirm the suitability of the basic design, investigate at a higher level of detail and achieve optimization of the project with the aim of perfecting our project in terms of costs, deadlines and design before construction,” added Daniel Roth.

Located due south of the current port, the Outer Port will specialize in transferring containers. The design includes an access channel and the dredging of the turning basin and the interior harbor to ensure accessibility for the E-class container ships, even under highly unfavorable weather conditions.

José Gallardo, Senior Engineer, PRDW, added: “At over 3.9 km long, this will be the largest breakwater ever planned for Chile. The location of the breakwater makes the environmental conditions particularly challenging.”

HR Wallingford is undertaking this work in partnership with The Instituto Nacional de Hidráulica (INH), with tests being conducted both in the U.K. and in Chile in INH’s laboratory in Peñaflor.

Maria di Leo, HR Wallingford Coastal Structures Group Manager, explained: “The studies we will be carrying out include 2D and 3D modelling to test breakwater stability and port operability. The 2D tests will focus on four sections of the breakwater, and will be used to optimize the design with respect to armor units, toe size and depth, crest elevation and crown wall configuration, among others.”

“For the 3D tests the whole port and adjacent stretches of coast will be modeled, including a portion of the canyon at the port entrance. To that end, we will build the model in our biggest basin, which is 75 m long and 32 m wide. The 3D tests will look at wave agitation and ship movement, and will also look at the wave induced three-dimensional effects that can affect the breakwater stability and overtopping performance, those that can’t be addressed in 2D.”

Work on the breakwater could begin by 2020, and the first stage of the first terminal could start operating by 2026 or 2027. 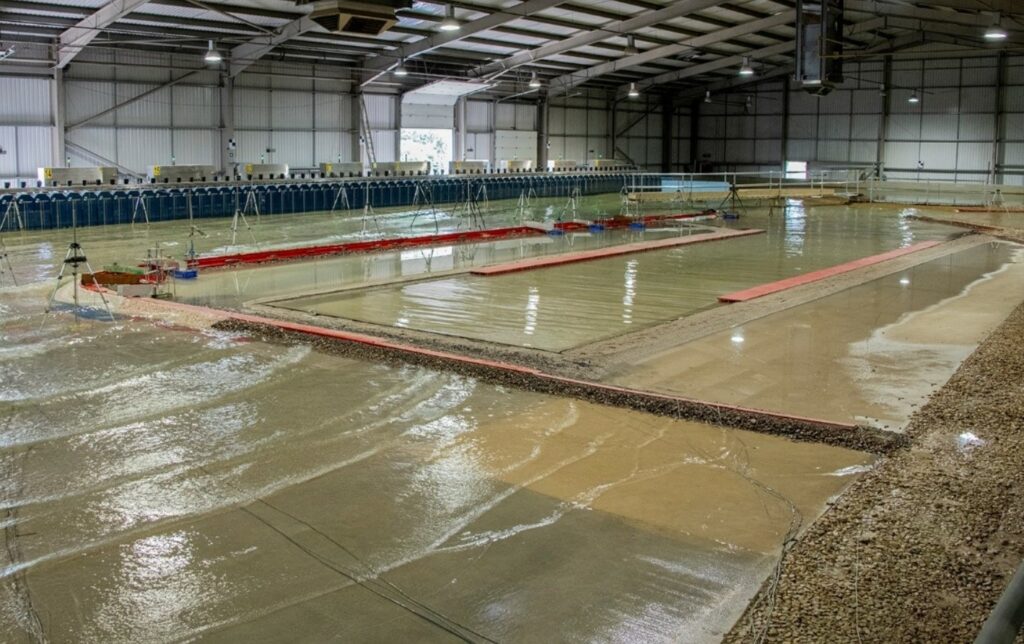