Interview with Tiedo Vellinga, Professor Emeritus of Ports and Waterways

After seven years serving as a professor at Delft University of Technology, Mr. Tiedo Vellinga recently assumed the new title of Professor Emeritus of Ports and Waterways.

During his concurrent career at the Port of Rotterdam Authority, he practiced what he preached, constantly challenging the status quo in port development. The result was an innovative and sustainable approach which expanded the port as well as delivered clear-cut benefits to People, Planet, and Profit.

In this interview, Mr Vellinga discusses his role as a bridge between academia and practice and its impact on the direction of port development.

Q: What was your role in the Maasvlakte 2 project?

Q: What was a factor in the Maasvlakte 2 project’s success?

Vellinga: We got a lot of support from the stakeholders and that was a key issue for such a project. In the end it went very well just because we had a good strategy looking back – and not knowing it – which was to include the stakeholders and try to be as sustainable as we could. Also by having a very transparent approach, wanting to know it all, and most importantly, by sharing, which took some time to develop within the project Normally, projects are rather isolated. People don’t like to share information because they are afraid of interference from the outside world. But we changed that all the way around. I think that was the great asset of the project and factor of its success as well.

Q: Do you believe mitigation and compensation is an ideal route for port planning or should a preventative approach be employed to guarantee the most added value for all stakeholders?

Vellinga: As a result of this project, I agree that to think in terms of mitigation and compensation is not the right way, it is only half way. You should be one step ahead and incorporate it in your earlier designs. I teach students that stakeholder agreement is extremely important but never replaces compliance with legislation. The compliance with legislation must be leading even if you don’t like the legislation.

The habitat and birds directive from Nature 2000 is complicated but it’s there for a reason. The legislation is extremely strict and rigid because 80% of the wetlands has been lost. We need to help governments make this legislation more fit for purpose. Don’t expect when stakeholders agree that it is also legally compliant. If you go one step too quick, then it may not be accepted because the legislation stops it.

Bring lawyers on board in the mission. Of course within nature, there is conservatism and fundamentalists which is very complicated. We have internally fundamental discussions about nature-based solutions and where you should plan ports. There are people within my team that say a port could never be planned in a nature conservation site because it will always bring damage. In my opinion, you can do so if you co-create, you lose some and you gain some. But if you are a fundamentalist, nothing can be lost no matter how much is gained.

This fundamental discussion is linked to this European legislation in which acceptance but be achieved first, and then you can lose and gain at the same time. That can happen if you address the issues very much upfront in your project and not after the project is made and in the assessment of the mitigation and the compensation.

Once you compensate, you are already in the discussion that you have done something very wrong. Bring in a solution from the beginning that’s already accepted by everybody but is also viable within the legislation.

Q: Would it be an option to educate or inform stakeholders to help promote shared values?

Vellinga: Yes, but you have to be serious about it and understand what you are doing. Connect to other disciplines as well as NGOs and bring them onto your team. We also welcomed co-decision making. We had stakeholder agreements which in my opinion is a co-decision.

The stakeholder also decides on the decisions you make. Transparency and openness is extremely important as well as sharing data. The other one is bringing people in your project.

Q: What did you learn from the completion of Maasvlakte 2?

Vellinga: What I learned from the Maasvlakte 2 project is that there should be a shift in the way of thinking about designing infrastructure. In the past we designed infrastructure for a function, for example for the port to make a basin a channel and a quay wall.

In Maasvlakte 2, we started out this way as well and then had obstructions. In the end, however we solved those potential problems and created a lot of value for stakeholders. And then I realised when you design it’s better to start with the needs and values, and try to create value for stakeholders from the beginning.

People always say that is more expensive but I don’t believe so. Over the longer term, it’s certainly not more expensive and you create more value and also more acceptance. In fact that’s also what we now try to pick up as lessons learned for other projects: to start with an inventory of needs and values.

The Maasvlakte 2 had many values. Of course there is nature – the biodiversity which has not been affected due to compensation – but it’s also creating natural values. There is a lot of landscape, recreation and also clean air. There is less congestion on the roads which is a value for society. There is archaeological value – and lots of it. This is also public value and you can see it at FutureLand in the exposition.

Q: How do you think the Ports and Waterways sector, and dredging industry as a whole, is stacking up to the task of sustainability?

Vellinga: We still need to create a lot of awareness. For example, I had a student doing his Master’s thesis on the design of a marina in Mauritius. Mauritius is a beautiful island with coral reefs but they don’t have many marinas because there was no acceptance for marinas due to environmental deterioration.

He looked at all the elements of a marina – like a jetty – and what it would need. He scored the requirements for the infrastructure against the opportunities for ES of coral reefs and mangroves. I think that was a very good exercise. He received a high grade and now he’s working for Royal HaskoningDHV and is part of the PIANC international working group on Ecosystem Services. He is expanding the thinking of alternative concepts to people in the real world.

You need patience but if you do the right thing, then in the end it will come. One may think they are doing something well for nature but knowledge can be lacking. Much more knowledge is needed to do it well, so to make a point, we may need to become a little bit more extreme.

Another example I’m working on now is Navigation with Nature. In this new navigational concept, the students – which are engineers – have to adapt the ship to the river and not the river to the ship. It’s a completely new way of thinking from traditional engineering.

You have to understand the river, the meandering and natural character of the river. When there is more water, more cargo can be carried, and when there is less water, different kinds of ships are used.

Ships which are very flexible and made of polyesters, and can consist of modules that are deeper for use when there is more water and less deep for when there is less water. The other aspect is to integrate technology and users, and use big data in the concept. The boats on the river have smart phones so they can measure and share data. These boats are on rivers which are not in Europe because European rivers are manmade and are more or less ruined naturewise.

This is a concept for rivers in South America and Myanmar which is also where we are trying to prove this concept through exchanging and gathering knowledge about currents, water depth and user experiences. Modern technology can support the shippers by using models – like SOBEK from Deltares – that learn from the day-to-day data and generate prediction models for the next days.

The shipper can download the data and knows where the river is going to be navigable. That means things can be changed and the ship can be adapted to the river. Traditional aides of navigation are not needed nor the channels that are dredged to keep them in place.

The system itself knows where the gullies are, how deep the ship can go and how deep it will be the day after tomorrow. Of course this may be a little bit disappointing for dredgers because they want to dredge and make infrastructure but I think they have to get past that way of thinking. If you think along these new concepts, there would still be lots of work for dredgers and contractors, but it will be different. 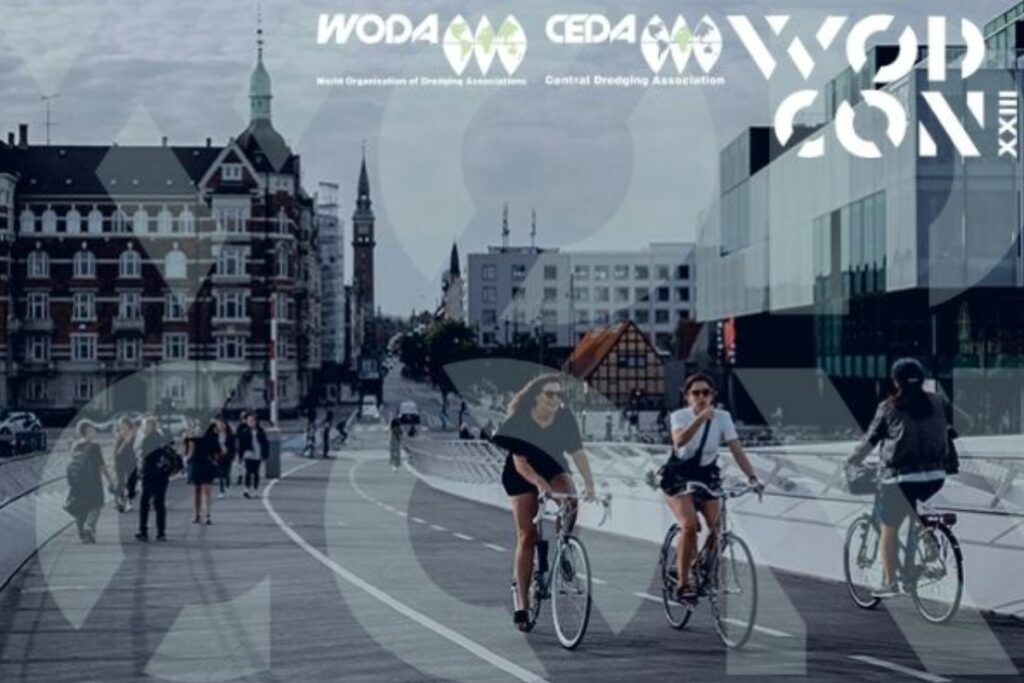