The U.S. EPA is observing the significant and rapid progress addressing polychlorinated biphenyl (PCB) contamination in New Bedford Harbor during the past several years.

This is a significant advance for the City and its ongoing economic revitalization, EPA said.

After more than 17 years of effort, the Superfund dredging of PCB-contaminated sediments in both the upper and lower harbor below the low tide line was finally completed in March 2020.

EPA has removed a total of approximately one million cubic yards of PCB-contaminated sediment from the harbor, marking the completion of all Superfund subtidal dredging.

As a result, EPA’s rail-accessible sediment dewatering and load-out facility on Hervey Tichon Avenue is no longer needed and has been decommissioned and transferred to the City of New Bedford to allow shoreline redevelopment in the port’s working waterfront.

The dewatering facility encompasses a five-acre parcel where hundreds of thousands of cubic yards of contaminated subtidal sediment was dewatered before being sent off-site for safe disposal at licensed facilities.

The site is one of the only heavy-duty, rail-accessible port facilities in New England. The marine bulkhead is reinforced for berthing large cargo ships and can support heavy cranes and other shoreline equipment abutting the future North Terminal Site.

This valuable commercial/industrial resource will now be transferred to the City for beneficial reuse, EPA said.

“EPA is very proud that our lengthy history addressing industrial pollution in New Bedford Harbor has achieved substantial results. EPA is making good on our commitment to see this project through to completion for the residents of New Bedford,” said EPA New England Regional Administrator Dennis Deziel.

“Through our cleanup work, EPA is ensuring that the Harbor does not pose health risks to people coming into contact with sediments or, in the long-term, when eating fish in and around the Harbor. By transferring control of the dewatering facility, EPA is helping the City’s efforts to revitalize their working waterfront in ways that will benefit the local and regional economy.”

The expedited work to remove and safely dispose of contaminated sediment from New Bedford Harbor was made possible by a historic 2012 settlement reached between the federal and state governments, and AVX Corp. for $366.25 million, plus interest, for cleanup costs in the New Bedford Harbor Superfund Site.

The settlement paved the way for expedited implementation of the cleanup of the New Bedford Harbor Site at full capacity, providing more rapid protection of public health and the environment in addressing PCB-contaminated sediment in the harbor.

Now that the subtidal Superfund dredging is complete, and transfer of the dewatering facility finalized, remediation will focus on those shoreline/saltmarsh areas in the upper harbor and Acushnet River north of Route 195 that have not yet been remediated.

During 2021, EPA and the Army Corps of Engineers will continue to remediate areas south of Pleasant Street in Fairhaven, and south of Belleville Road in New Bedford.

All of the shoreline remediation follows similar procedures: All removed soil/sediment will be thickened with Portland cement at EPA’s Sawyer Street facility and then disposed off-site at a licensed TSCA landfill.

The excavated shoreline areas will be backfilled with clean topsoil and planted with thousands of native salt marsh grasses, trees and shrubs. 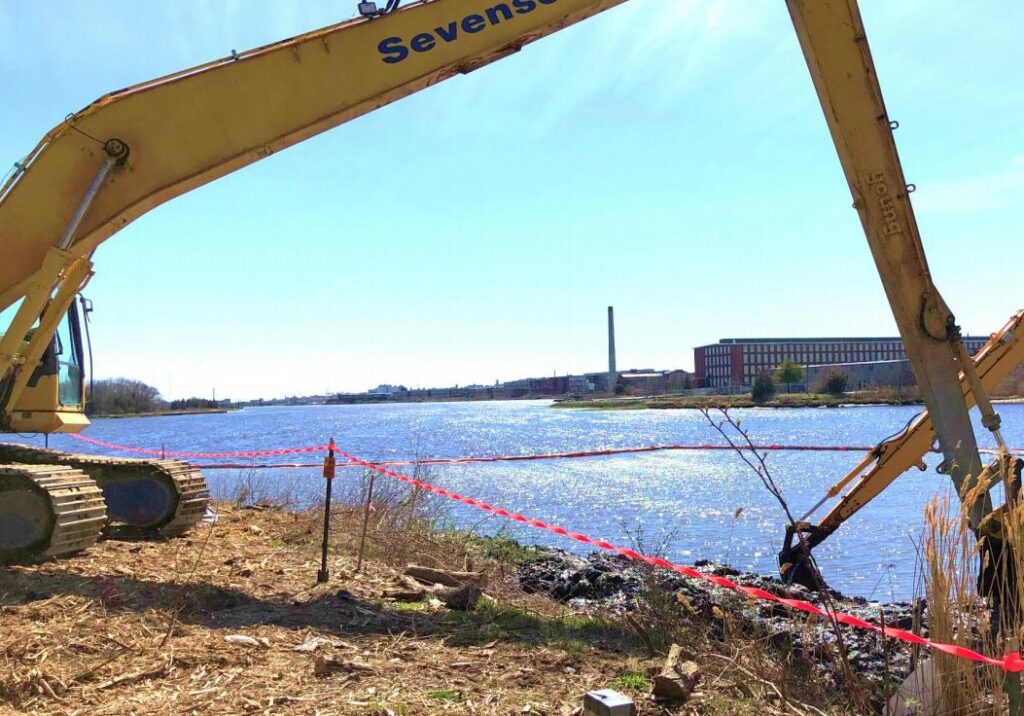