Beneficial use of dredged material in Buffalo

The Buffalo District completed construction of the project in fall 2020, creating a total 10 acres of coastal wetland habitat to benefit the health of the Great Lakes.

What happened at Unity Island?

“This region has a long history of wetland loss,” said Andrew Hannes, ecologist with the USACE Buffalo District.

Slow and shallow water habitats critical to healthy aquatic ecosystems in the area have been depleted by erosion and manmade impacts over the course of the 20th century.

In the 1900s, Unity Island was used as Buffalo’s landfill, and its north pond was originally constructed to receive more waste. When the island was remediated in 2000 and re-opened as a park by the city and the New York State Department of Environmental Conservation, the north pond was left sitting as a pool of deep water, disconnected from the Niagara River just outside its west embankment.

Upstream from Unity Island is the Buffalo River, which was declared biologically dead in 1969 after decades of industrial and municipal pollution. In 2011, as part of a community-led effort, USACE and the U.S. Environmental Protection Agency began navigational dredging of the river to make way for environmental dredging by the EPA, New York State’s Department of Environmental Conservation, Honeywell, and Buffalo Niagara Riverkeeper. More than 1 million cubic yards of contaminated sediment were removed.

In the years that followed, sediment removed from the river’s federal navigation channel as part of ongoing navigational dredging by USACE was certified as clean by state and federal standards and acceptable for beneficial use.

“We kind of saw [Unity Island’s North Pond] and said, ‘Wow. Here is this cool opportunity – deep water over here totally disconnected from the rest of the river. Let’s bring the dredged material down the Black Rock Canal, tie up [next to the island], place it in here, shallow the depths and create a wetland. And that’s what we did,” Hannes said.

The project was funded through USACE’s Continuing Authorities Program 204 and a Habitat Enhancement and Restoration Fund grant awarded to the City of Buffalo from the New York Power Authority.

Construction started in May 2018 with placement of 56,000 cubic yards of dredged material in less than two months. Crews shallowed the pond’s depths to wetland vegetation-friendly elevations, opened the stone dike between the Niagara River and the pond, reconnecting 10 acres of backwater habitat to the main stem Niagara River. They reused stone from the dike to create an underwater reef and added vegetation to the site over the course of two years.

To read more about this thriving wetland ecosystem in the City of Buffalo’s back yard, please click here. 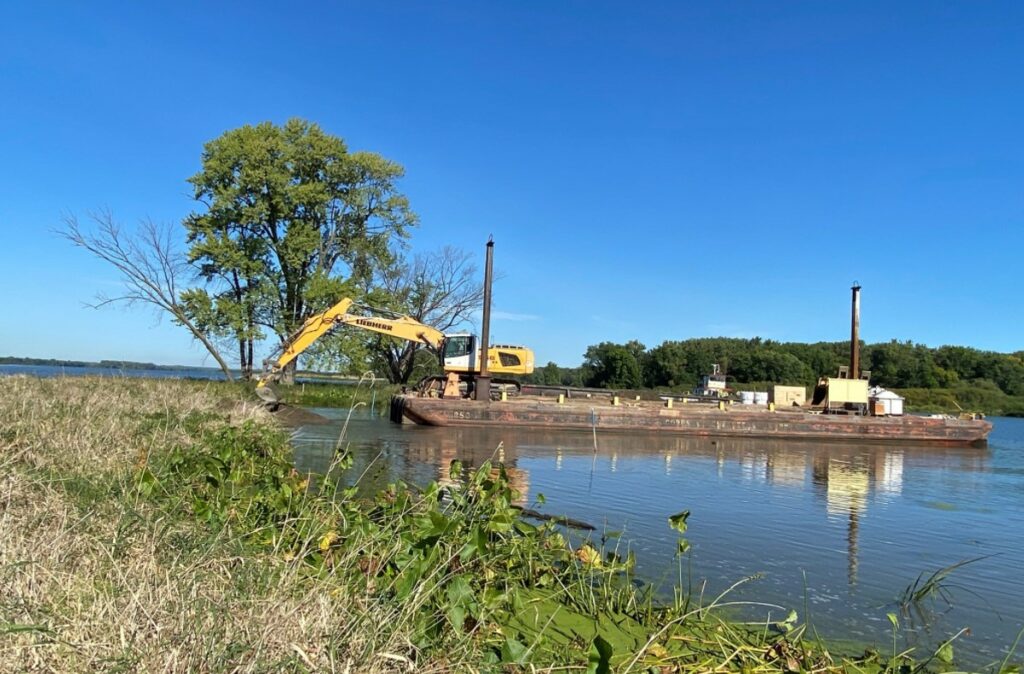