Dredging, the task of scooping up sediment, branches and tossed-out junk that makes passing through waterways a hazard for boaters, is proceeding on the Chain ’O Lakes, though a sopping early summer has slowed the pace.

“We had the wettest June in 108 years,” said Ron Barker, Fox Waterway Agency deputy director of operations. “We were a little bit late getting started because when it’s wet, the ground won’t support our trucks.”

Barker was responding to a complaint to The News-Sun by a resident along the Chain. “People can’t get their boats in and out,” claimed the caller.

“Does that mean we’re shut down? No,” said Barker, who likens dredging to the weather. “If it’s happens out your window, everything is great. Does everyone wish it was in front of their house? Yes.” Three hydraulic dredges and two long-stick back hoes are still in use, he pointed out.

The 28,000 boaters who recreate on the Chain each year depend on competent and timely dredging by the Fox Waterway Agency, which juggles cleaning projects spring through fall for more than 75 miles of shoreline. The agency will spend close to $500,000 this year to haul away about 100,000 cubic yards of sediment and other material that washes down the Fox River and builds up in the lakes and channels.

“We do that with a very small crew and all our people are multi-tasking,” Barker said.

Severe thunderstorms and toppled trees can also slow work — and did in mid-June.

“We have to shut down dredging and go remove trees,” Barker said.

Residents who request dredging around their boat launches and piers must complete an application and are asked to “cost share.”

Eight agency waterway maintainers are responsible for setting-out buoys and cleaning the Fox River and Chain O’ Lakes from the Algonquin Dam all the way north to the Wisconsin state line. Pulled from the water in years past have been large appliances like washers and dryers, auto engines and dead animals.

“We will make our target for this year,” said Barker, who estimated that 30 percent of this year’s dredging has been completed, including work on Grass Lake, which reduces the flow of unwanted stuff into other lakes.

“We have to prioritize,” added Barker. “We do a lot of dredging in the fall. By then, the boat traffic starts to die-off. It’s like working on the tollway, but instead of cars, you have boats. 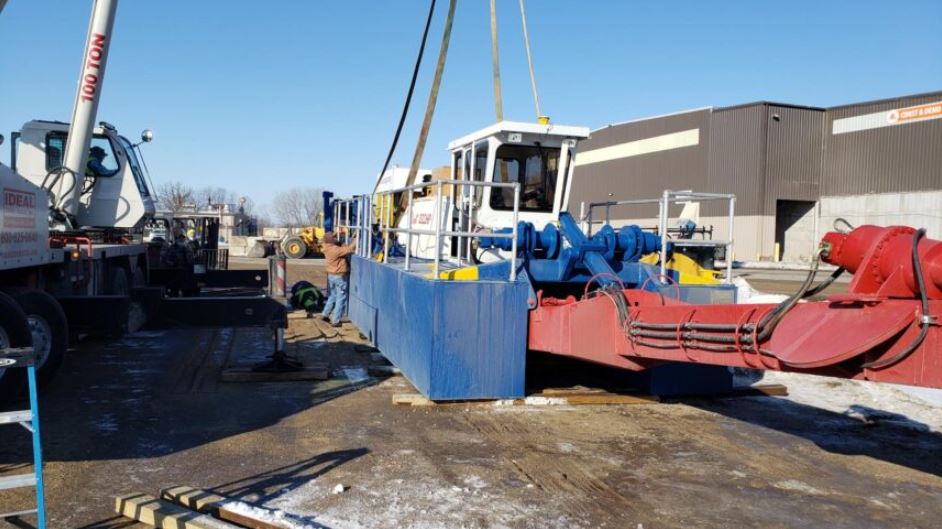