DSC Dredge LLC, a leading U.S. dredge manufacturer, is excited to announce the recent delivery of several dredges to international customers. With DSC equipment in more countries than ever, the company is not only expanding worldwide, but is also evolving its own culture.

DSC’s W&S Division is scheduled to deliver its fifth dredge to India later this month. Among the five dredges are two 8-inch Badgers and three 10-inch Wolverines, which are being operated by a dredge contractor for canal and lake restoration projects funded by the Indian Government. DSC’s W&S Division manufactures both the Badger and Wolverine Class dredges at their Greenbush, Michigan facility. These dredges are among the most portable designed models the company’s product line offers. Because of their size, they are single truck transportable and are ideal for dredging contractors. Both dredges are equipped with simplistic controls and operating features. The 8-inch Badger can dig to 20 feet (6 m) below the surface, while the 10-inch Wolverine can excavate up to 25 feet (7.6 m) in their standard configurations. Both cutter head dredges feature 5-blade cutters that are available with cast steel smooth blades, serrated edges, or replaceable teeth depending upon project conditions.

Over the summer, DSC delivered a Marlin class dredge and work boat (pictured right) to Azikel Dredging & Construction of Yenagoa, Nigeria, and spent several weeks testing and preparing the equipment for its rigorous work schedule. This delivery makes the second DSC dredge to Nigeria this year. Azikel specializes in dredging for land reclamation, canal development, and sand mining and acquired the dredge to enhance their capabilities. The company stockpiles sand and sells it to contractors who use the sand to make concrete for projects such as road construction. With their new Marlin dredge, the company will be able to dig deeper as it can dredge to a depth of 76 feet (23 m). The DSC Marlin is reported to be among the first dredges capable of digging to such depths throughout Nigeria and is one of the most technically-advanced dredges in the country. The Azikel dredge crew also received operator training to familiarize themselves with all the new equipment’s sophisticated features.

Dr. Eruani A.G., CEO of Azikel, was a great host to DSC representatives Carl Agurcia and David Eshleman, who spent many weeks in Nigeria assembling and testing the dredge during its commission. In fact, the Azikel group was so pleased with the two’s performance they honored the men by making them their very own chieftaincy regalia, traditional attire that is only worn by great and successful people.

Carl has travelled to Nigeria before and is becoming somewhat familiar with the country. However, in his most recent visit he felt for the first time he was able to see the country through the natives’ eyes. Because of his extended stay, Carl assimilated with the locals and found that they were very receptive to his learning and eager to show him their lifestyle. The Azikel staff was more than willing to assist DSC’s representatives, making a tough job a little easier on all.

As DSC continues to grow worldwide, the company is inevitably exposed to many different cultures and traditions. Last month, Bob Wetta, President of DSC, was appointed to serve on the Louisiana District Export Council (LDEC) to assist other companies in exports. Bob is fascinated by different cultures and wants to use his knowledge to help others expand globally. As an LDEC member, Bob will work with U.S. Commercial Services/New Orleans U.S. Export Assistance Center to serve as a mentor for new exporters, sharing his knowledge about export issues and international market development. Bob’s responsibility is to report his findings to the U.S. Department of Commerce and identify ways to increase exports worldwide.

Other global projects currently in the works include an automation upgrade on equipment in Panama, construction of (2) 24” Marlin dredges and a work boat for Bangladesh, (1) Moray class dredge for Congo, a pending bid award for a new dredge in Colombia, and the completion of a 20” Shark class dredge built on speculation for export. This 20” Shark class dredge is available immediately and ready to ship. Please contact DSC’s sales department for more information about this dredge and other DSC products.

DSC is pleased to have its products in so many countries and hopes to continue to be at the forefront of new opportunities abroad. As the company evolves, so does the culture of DSC, making each employee more sensitive to other ways of life.

DSC Dredge LLC, a world’s leading designer and manufacturer of modern cutter suction dredges and underwater pump mining dredges, has major manufacturing facilities located in Reserve, LA, Poplarville, MS, and Greenbush, MI. For more information about the company and their products and services, please visit them at www.dscdredge.com. 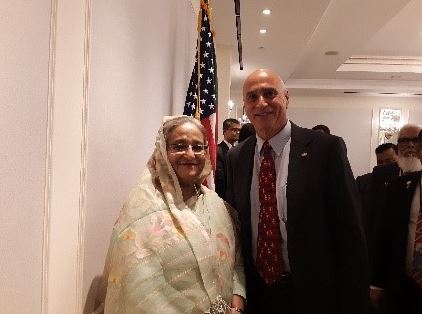