Advertisement
Back to overview
Home Dredging Today The Netherlands: DEME and Congo

The Netherlands: DEME and Congo

Congo is getting a very special meaning for the DEME-Group (Dredging, Environmental and Marine Engineering), since the new flag ship of the DEME-fleet is being named ‘Congo River’ and since only recently DEME signed a contract with the Régie des Voies Maritimes (RVM) of Congo for dredging works to be executed on the Congo river.

New Generation Plus mega trailer is the new flagship of DEME.

The contract between DEME N.V. and IHC Dredgers B.V. for the design, construction, and delivery of the ship was signed in December 2008. The keel laying took place on 15 December 2009. The ‘Congo River’ will be commissioned as of mid-2011 and will be named during a formal ceremony in Zeebrugge on 8 July 2011. Only a few weeks ago, the 5,000 m3 gravel trailer ‘Victor Horta’ of the DEME Group was named and launched.

The name ‘Congo River’ fits perfectly well into the series of names of majestic world rivers that figure on the bows of a number of our trailers such as ‘Pearl River’, ‘Nile River’ or ‘Amazone. DEME likewise finds an interesting parallel in the fact that the ‘Congo River’, in certain reaches along its course, displays the characteristic property to very quickly displace enormous volumes of sand.

The ‘Congo River’ is an innovative and multi-functional ship, very manoeuvrable because of its large width (38 m) and short length (168 m) and capable of deployment for many different purposes. Even fully loaded, the vessel will have a limited draught of only 12 m!. This makes the ‘Congo River’ ideal for operations in ports, entrance and navigation channels, beach nourishment, all types of land reclamation, but also very suitable for long-distance transport. The ‘Congo River’ can, with its deep-suction installation, dredge down to depths of over 100 metres.

Aside from the ‘Congo River’ and the ‘Victor Horta’, DEME currently has another six large ultramodern dredgers and marine vessels under construction: the 11,000 m3 trailing suction hopper dredger ‘Breughel’, the DP2 jack-up platform ‘Neptune’, the 16,000 kW self-propelled cutter suction dredgers ‘Al Jarraf’ and ‘Amazone’, the DP2 fall pipe vessel ‘Flintstone’, and the heavy-duty 28,000 kW self-propelled rock cutter suction dredger ‘Ambiorix’. As from 2011-2012, all of these new vessels will provide DEME with one of the most advanced, versatile and efficient fleets in the world.

Additional data on the CONGO RIVER

2. New contract for dredging works on the Congo river.

DEME company Dredging International has signed a contract with the Congolese Régie des Voies Maritimes (RVM) in cooperation with the shipping company Maersk for the execution of deepening works on the Congo river between Malela and Boma, in the downstream reach some 60 km from the port of Matadi. The works call for the deepening of this section of the river from the present level of -18 feet to approximately 26 feet. The works are being executed with the trailing suction hopper dredger ‘Orwell’ that was mobilized from Antwerp in Belgium. The works have just been started and will cover a period of approximately two months. The objective of these works is to offer to the container vessels of Maersk sufficient depth to be able to reach the port of Matadi safely.

Within the framework of the jumelage between Antwerp and Matadi, the port of Antwerp supports this important dredging campaign. Before the start of the works, they have surveyed and mapped the critical spots of the river. During the execution of the works a number of their experts are interactively supervising the dredging works.

However, not only through them is DEME acquainted with the Congo river. During the years 1989 – 1990 Dredging International carried out deepening works in this reach of the river to achieve depths of – 32 feet. This knowledge is quite important, since the Congo river is known to have a very complex typical hydrography that requires very specific ‘directed dredging’.

The Belgian dredging and environmental group DEME is a conglomerate of enterprises with roots established more than one and a half centuries ago. The Group specializes in capital and maintenance dredging, port constructions and expansions, providing services to the oil and gas industry, wreckage clearing and heavy-lifting, deep-sea operations, the construction of offshore wind parks, plus a wide range of environmental activities – from water treatment and sludge recycling to soil remediation and the treatment of either lightly or heavily contaminated sedimentation. DEME operates a modern, multi-functional and varied fleet of 90 large dredgers and some 200 auxiliary vessels. The company employs a 4,000-strong workforce. The Group is active worldwide – in 2010, it completed projects in 50 countries on all continents. Its current investment programme in high-tech equipment enables DEME to meet future challenges with an ultra-efficient and modern fleet. 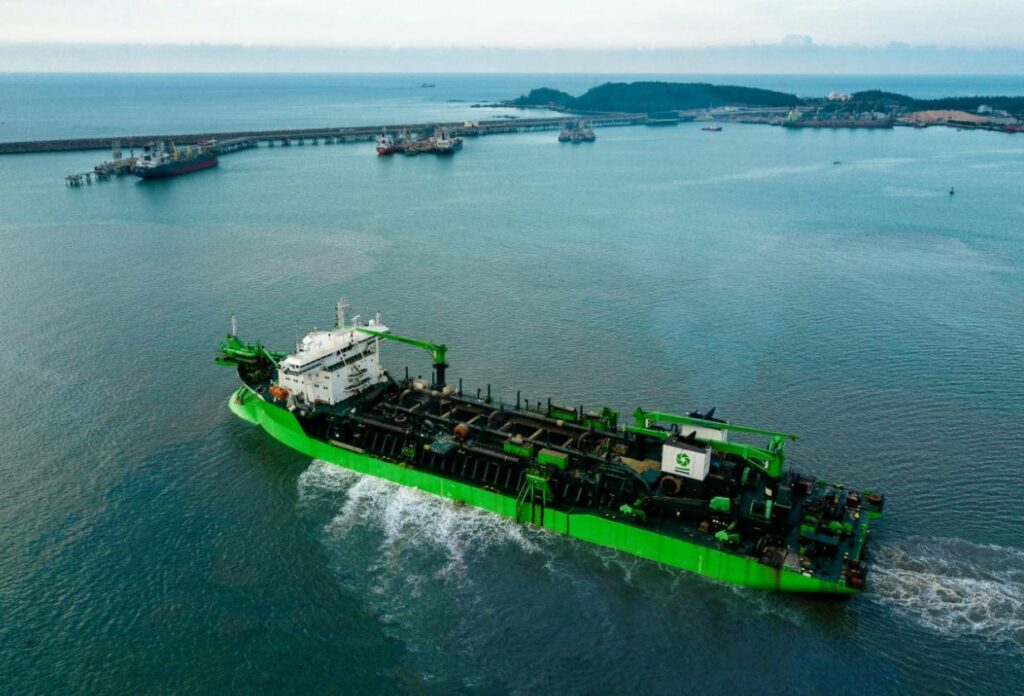