With the first quarter of 2011 behind us, DSC is proud to report that business has returned to what it was before the national recession. DSC has always found a sense of security in the backlog the company maintains and is thankful that it has returned to normal. With a name that has become globally recognized, the company continues to expand and is looking to exceed previous annual profits.

Almost eight months after taking delivery of their new 24” cutter suction dredge, the Port of New Orleans reports the honeymoon phase has yet to wear off. The Port is especially pleased with the significant fuel savings the new dredge provides. The 24” cutter suction dredge uses one-third of fuel the Port was used to consuming, while producing at a much higher rate. The Port is quite proud of the significant savings as the cost of fuel continues to rise. The fuel efficiency is attributed to the dredge’s modern GE engine. The Port has also grown fond of the new dredge’s rake feature, which is located on the stern of the dredge. This feature makes pushing the dredge upriver a much simpler task. With the addition of an elevated walkway, boarding the dredge is also much easier. The Mississippi River stages fluctuate between 2-16 feet and because of this inconsistency, boarding the dredge used to be somewhat problematic. However, this inconvenience was considered in the new design and now the Port’s crew can board quite easily without having to climb several series of staircases.

The dredge also boasts self-contained access to the engine room, galley, lever room, onboard offices, and work area. Being able to access multiple areas by way of an indoor staircase is especially practical in southern Louisiana where rain frequents the forecast. The Port notes that the addition of DSC’s Maximizer suction relief system has allowed them to avoid a lot of potential downtime. This system is designed to assist the operator in achieving maximum production, while reducing the chance of a plugged line. It incorporates a pneumatically controlled butterfly valve that is plumbed into the suction of the dredge. The system automatically responds to suction problems, including vacuum (differential pressure) and discharge pressure. In order to maximize its productive use, desired points to activate the suction valve can be adjusted through the PLC. In addition to dredge vacuum, which is primarily used to control the Maximizer, the system is designed to utilize data from discharge pressure, flow meters, and production meters.

All and all the Port of New Orleans couldn’t be more pleased with their ultra-modern cutter suction dredge. The numerous improvements have allowed the Port to save time and money, making this purchase a particularly good investment.

On the other side of the world, the largest and most modern dredge in Bangladesh arrived in Chittagong in February 2011. The DSC 24” Dual Pump Marlin Class dredge, equipped with a 23 m digging depth capability, is the deepest digging dredge in the country and is one of two units ordered by the Bashundhara Dredging Company in Dhaka. In addition to the two powerful dredges, a DSC multipurpose workboat was also delivered to support dredging operations.

DSC field engineer, Carl Agurcia, is currently onsite supervising the assembly and launch of the first dredge and workboat in the port of Chittagong. The dredge has performed flawlessly and has surpassed customer’s production expectations. “We are in the final stages of training the local crew in operations and maintenance and this dredge is causing a huge buzz in the area”, reported Carl. “Government officials, private companies and even our competitors are stopping by to see this dredge in action”. The second 24” Dual Pump Marlin is currently on a ship traveling to Chittagong and is scheduled to arrive the first week of May.

Across the globe in the state of Caldas, Colombia, CHEC Electric Company is thrilled to have their dredge in operation. The company purchased a 10” Wolverine dredge from DSC this past December to use in an environmental dredging project. The area relies on power generated from two dams that are fed by mountain rivers. Over time, the naturally occurring process has caused the dams to lose their capacity as sediment has filled in making the dams very shallow. In order to maintain electrical services, CHEC will dredge the dams to remove sediment and recover the dams’ volume. Following the dredge launch, CHEC’s employees received operator and maintenance training. The company reports that the dredge has exceeded their expectations and they are quite proud of their purchase.

DSC has graciously accepted the award of the Loup Power District contract. This dredge represents the first dustpan dredge (pictured left) to be manufactured under the DSC name. Expected to be delivered and placed in service in August 2011, the power company will use the dredge to maintain the canal that feeds the two hydroelectric plants that power the area. The new DSC custom dustpan dredge will replace the company’s existing unit, which was built in the 30s and has enjoyed a long, productive life.

So far 2011 is proving to be a strong year for DSC as orders continue to roll in. The company is steadily expanding and is now in over 40 different countries worldwide! 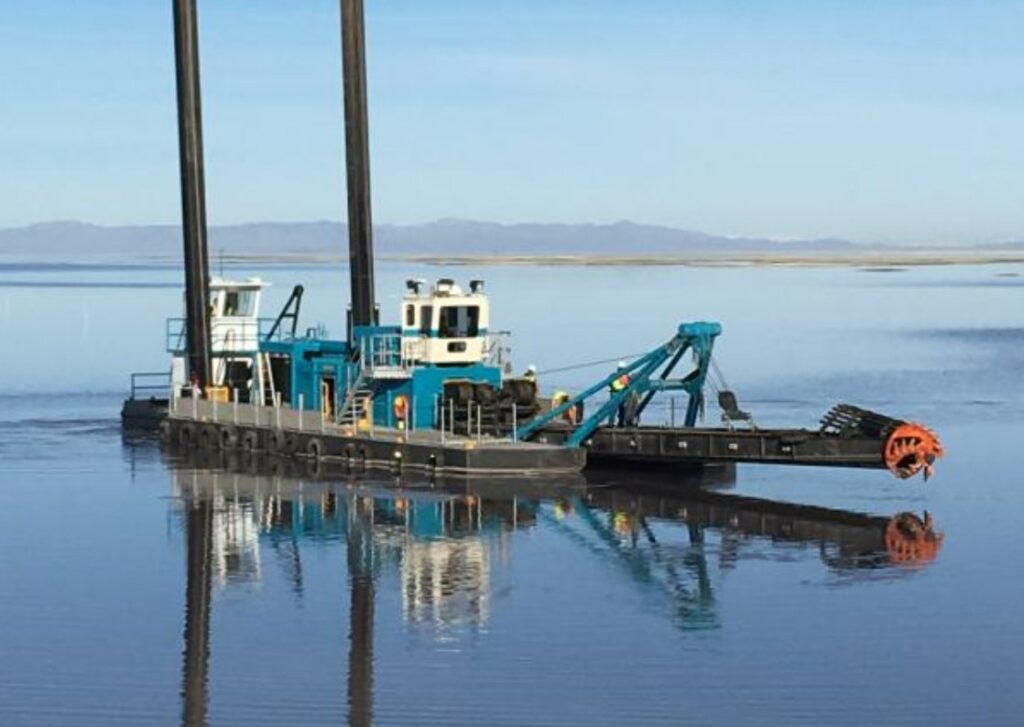