On 7th March 2011, specialist marine and civils contractor Land and Water Services Ltd (LAWS) mobilised a bespoke dredging team to Premier’s Falmouth Marina in Cornwall to undertake a particularly awkward improvement project that involved the installation of tubular mooring piles, new pontoons and the removal of 22,300m3 of contaminated sediments. Following difficulties experienced with a previously licensed dredging technique, Hyder Consulting (UK) Ltd. was commissioned in 2006 to renew and amend Premier’s licence for dredging work and is now administering the contract on Premier’s behalf.

Contaminated Sediments, including residues of the compound Tri-Butyl-Tin (formerly used in anti-fouling paints, but banned from use in the marine environment in the 1980’s due to its high toxicity to benthic life), were required to be removed to improve the mooring and operational facilities at the site. The close proximity of a number of highly protected sites (SAC and SSSI), and the attendent risks of recovering a highly mobile contaminant in the tidal environment, makes the works particularly high profile for the regulators.

The sensitivity of the project was significantly heightened when the operations of a previous contractor had been halted by regulators due to a number of “operational concerns”. To meet the time constraints of the marine works licence, LAWS initially mobilised a piling crane barge, and delivered the piling works in advance of the main dredging campaign, whilst they developed a bespoke “moon-pool” and environmental mitigation measures for the dredging phase, as part of an alternative tender strategy.

With full regulator liaison, LAWS developed their own site specific waste strategy plan, with environmental protection being offered by combining a number of technologies, developed and operated by LAWS. The risk of suspended sediment release was mitigated using a combination of 4 technologies:

a) The excavator was equipped with LAWS’ own design “visor bucket”, this enabled the excavator operator to collect sediments from the seabed, and to close the visor before lifting the bucket through the water column. This prevented the fluidisation of sediments as the bucket was raised, and swung over the transfer barge moored alongside the dredge pontoon

b) The excavator was fitted with a new 3D DGPS dig control system allowing the operator to finely position his bucket without the need for excessive trimming and bed levelling. Using a telemetry link to the remote site office, excavator production and tracking can be monitored remotely, allowing copy files to be saved for Regulator and Client inspection, to demonstrate how LAWS controlled excavation with the pre-zoned “contamination” areas. This software can also be used to record volumes of material dredged each day and plot where the dredging has taken place, thus not only allowing quality control of the works, but also providing the client with a regular update of expenditure.

c) As part of an alternative tender strategy LAWS has designed and fabricated a “moon-pool” system around the digging envelope in front of the dredge pontoon. The moon-pool uses a perimeter float system made of HDPE welded pipe to maintain buoyancy, with a flexible joint at the bow of the pontoon to allow the two units to flex independently of one another (essential in the tidal environment). Sediment containment within the moon-pool is afforded by a full-depth “skirt” of permeable sediment curtain that can be raised and lowered, according to tidal conditions.

d). As a final environmental control, LAWS deployed a series of water–quality monitoring buoys to the perimeter of the works with the locations and pre-agreed action thresholds set with the Regulator. The suspended solids within the water column are continuously measured by the buoys and sent electronically to an intranet where they can be read. An alarm system, also integral to the system, alerts the team to any levels that exceed the threshold. Operations can then cease in the event of any raised turbidity levels being attributed to the dredging works.

Not content, with providing a strategy for the safe recovery of the legacy waste, LAWS were contracted to manage the transfer and recycling of the dredged arisings. Prior to contracts being signed, 4Recycling Ltd carried out a research programme to develop novel recycling outlets for low level TBT contaminated dredging’s and in conjunction with the Environment Agency agreed a site specific protocol that allowed the use of dredgings as a restoration soil over a number of nearby sites formerly used for china clay extraction. Thus in agreement with the client LAWS awarded 4Recycling Ltd the transport and recycling element of the contract.

At a cost of £1.66million, the project is currently on track for early completion in August 2010.

LAWS Contracts Manager Tim Dawson said that undertaking this work so soon after the previous attempt was always likely to draw a lot of attention from some very influential bodies and government agencies so our Senior Site Manager, Andy Bosman, has worked very closely with our designer to make sure we got the moon pool working as effectively and efficiently as possible.

The Regulator of the Environment Agency highlighted in their own Audit Report just how important this area is…”The Fal Estuary is designated under the Habitats Directive as a Special Area of Conservation, Europe’s highest conservation designation”. Following extensive investigations it was decided that the reuse of the material was an excellent opportunity to help restore the spoil heaps generated by the China Clay industry and having witnessed the dredging system working the EA commented..”It was clear from my observations during active dredging that the moon pool was working well. The water immediately surrounding the pool appeared unaffected by the operation…”

The Chairperson of the Truro Branch of the Institution of Civil Engineers, Teresa Frost commented after a site visit to the operation that “It was a fantastic opportunity to see civil engineers and civil engineering in practice, working with traditional methods and new technology to create new moorings whilst working sensitively in the marine environment”. 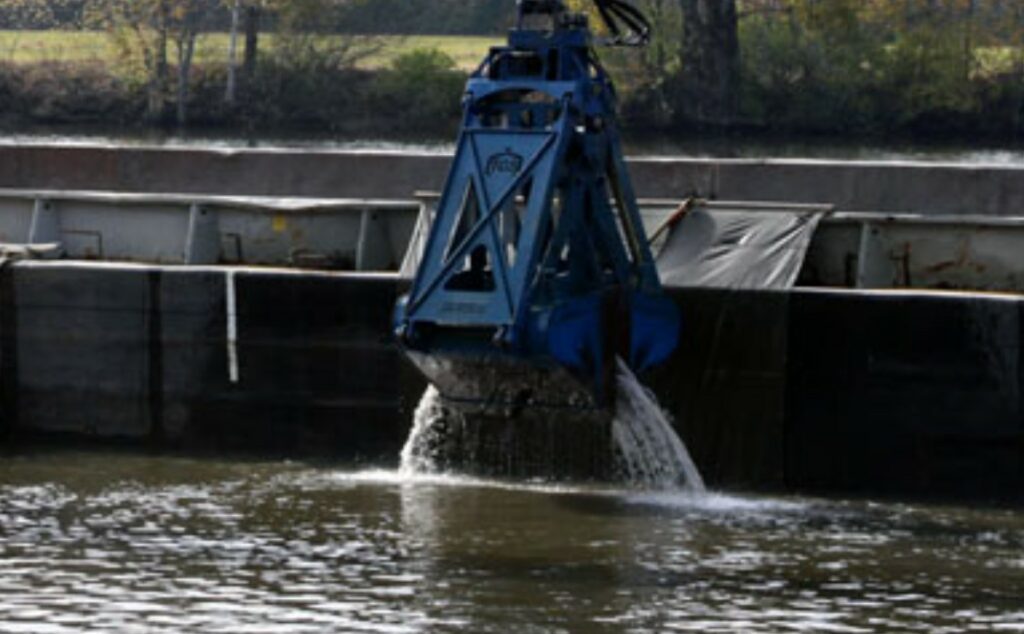