Olympic tennis champion Justine Henin is the godmother of the ‘Congo River’. The ‘Flinstone’ was christened by Olympic high jump champion Tia Hellebaut: a unique ‘e-christening’, as the ship is still at the Sembawang shipyard in Singapore where it was built and where it is being prepared for its first assignment in the People’s Republic of China.

Both ‘golden ladies’, Justine Henin and Tia Hellebaut, symbolise the type of Olympic performance that DEME strives to achieve.

Christening of the Flintstone

DP2 fall pipe vessel performs stone dumping to a depth of 2,000 m and reinforces the high-tech profile of DEME for the oil and gas industry.

At 3:00 p.m. in afternoon, the new fall pipe vessel was virtually christened by Ms Tia Hellebaut, who literally passed on an Olympic flame in the huge party tent erected at the ‘Zeestation’ in the outer port of Zeebrugge. The flame then proceeded to Singapore by means of a long relay chain. There, the flame burned through a rope and the traditional champagne bottle crashed against the bow, christening the ship. And with that, what is likely the first e-christening ever, was history!

The Flintstone was built by the Sembawang shipyard in Singapore, commissioned by Tideway, the offshore branch for oil and gas activities of the Belgian dredging and environmental group DEME. The Flintstone can take 19,000 tons of quarry stone on board and, thanks to its highly sophisticated equipment, very precisely install it at record depths of up to 2,000 m.

The Flintstone is Tideway’s third and largest fall pipe vessel, after the 11,500-ton Rollingstone and the 17,500-ton Seahorse. The vessel meets Ice Class criteria and as a result is able to work in the most extreme conditions.

A fall pipe vessel is a very exceptional vessel, with a space to store sorted quarry stone in the requested volume and grade. A ‘fall pipe’, which hangs under the ship, ensures that this quarry stone is placed at the exact location on top of pipelines or directly on the sea floor. For this, the bottom of the fall pipe is equipped with a Remotely Operated Vehicle (ROV). This ROV is operated from the deck and controls the placement of the quarry stone in three dimensions. Offshore stone dumping activities are usually performed in order to stabilise and protect pipelines and high-voltage cables. Tideway’s new fall pipe vessel can carry out stone dumping operations to absolute record depths of up to 2,000 m.

The new ship will to a great extent further promote the oil and gas activities of the DEME Group. In the coming years, among its other activities the Group will focus on services to oil & gas companies, the mining industry and energy companies. In March of this year the DEME Group announced its plans to develop deep sea mining activities through the joint venture SEAFLORE, together with IHC Merwede. A ship such as the Flintstone, which is able to work at great depths, can be utilised for this as well.

Furthermore, recent market trends, such as the rising price of crude oil, make laying deep sea pipelines and protecting them deep at sea more feasible. New opportunities are arising with the exploration of deep sea oil fields off the coast of Brazil, West Africa and the polar regions. In this context, the Flintstone has a few important features.

The Flintstone is equipped with an installation for dynamic positioning (DP2). A highly sophisticated, remotely operated robot (Remotely Operated Vehicle, ROV) with an active wave and swell compensator and the newest measuring and surveying equipment. The ship has an Ice Class notation, and is thereby fully certified to work in arctic conditions. The potential to work at depths of up to 2,000 m is obviously a competitive advantage in itself. The cruising speed of 15 knots is a significant trump card. This speed enables it to travel more quickly from one quarry to another and thus to be operational for a longer duration at the actual site. The Flintstone has a ‘green’ design, and was built according to the Lloyd’s Register Code for Environmental Protection. This implies, among other things, that energy-saving measures are fully utilised and that the emission of NOx is kept to an absolute minimum.

Christening of the Congo River

Around 4:30 p.m., Justine Henin, Olympic tennis champion and winner of several Grand Slam titles, sent the christening champagne hurtling against the bow of the Congo River with a sharp blow from her racquet.

The contract between DEME N.V. and IHC Dredgers B.V. for the design, building and delivery of the ship was signed in December 2008. The laying of the keel started on 15 December 2009. The ship was launched at the IHC Merwede shipyard in Krimpen aan den Ijssel in the Netherlands on 21 January 2011.

The impressive ship, 168 m in length, is packed with high-tech equipment, making it one of the highest performing and most economical dredgers on today’s market. With the launch of this ‘mega’ trailing suction hopper dredger, DEME confirms its conviction that the dredging market also holds great prospects in the coming years.

The name Congo River fits into the series of great world rivers whose names grace the bows of some of DEME’s large dredgers. Other examples are the Pearl River, the Nile River and the Amazone. DEME also finds an interesting parallel in the fact that the Congo River, at certain stretches along its course, has the distinguishing feature of very rapidly displacing enormous volumes of sand.

The Congo River is an innovative and versatile vessel, very manoeuvrable due to its large beam (38 m) and short length (168 m) and deployable for many different purposes. Because of its shallow draught, the ship can operate at a limited depth even when fully loaded. The Congo River can thus be efficiently deployed in ports, channels, for beach nourishment and land reclamation on both a small and large scale, etc., as well as for long-distance transport. With its deep-suction installation, the new ‘mega’ trailer can dredge at depths of more than a hundred metres.

Additional information about the Congo River

Only a few days ago, DBM – the DEME company that extracts sea gravel for the construction industry – launched the Victor Horta, its second gravel suction dredger with a capacity of 5,000 m³. Furthermore, alongside the Congo River and the Flintstone, DEME currently has six more ultramodern dredgers and marine vessels under construction: the 11,000 m3 suction dredger Breughel, the DP2 jack-up vessel Neptune, the 16,000 kW self-propelled cutter suction dredgers Al Jarraf and Amazone, a Ravenstein 900 backhoe pontoon and the super-powerful 28,000 kW, self-propelled rock cutter dredger Ambiorix. In the years 2011-2012, all of these new vessels will provide DME with one of the most advanced and efficient fleets in the world. 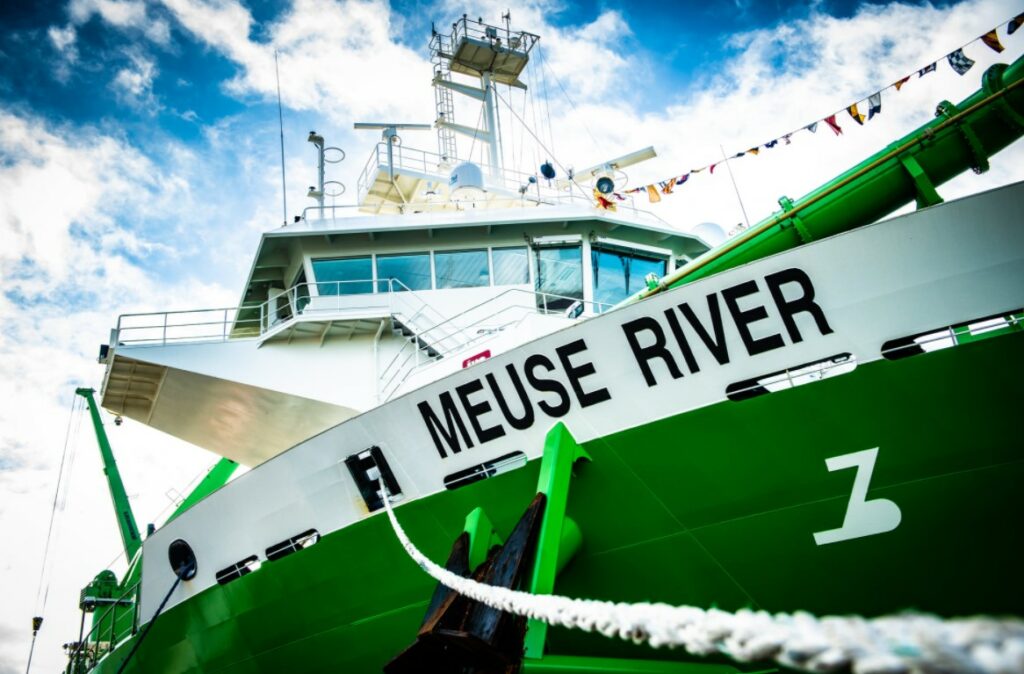