With the fourth quarter of 2011 coming to a close, DSC is making strides and expanding to more countries. The company continues to outperform previous years’ numbers, making each year a little more productive than the next.

In June 2011, DSC delivered the second of two 24-inch Dual Pump Marlin Class dredges. The new dredge was assembled, launched, and tested near Chittagong, Bangladesh by DSC’s Sonny Lightsey and Chris Hunt. Earlier this year, DSC delivered the first dredge along with a multipurpose workboat, which will be used to support dredging operations. Both dredges are equipped with a 23 m digging depth capability and are the deepest digging dredges in the country. Bangladesh contains over 300 rivers; many of which are heavily silted and have not been dredged in nearly thirty years. The new equipment will be used to dredge the rivers in an effort to reduce potential flooding that inevitably follows regularly occurring natural disasters and to make the rivers more navigable for ship traffic.

On the other side of the world, DSC delivered a 20-Inch Shark Class dredge to Belize in August 2011. DSC’s David Miller and Eddie Cicardo launched, tested, and trained operators on their new equipment. The Shark class dredge will be used to deepen the channels to allow a cargo ship carrying bananas to pass more easily. After dredging, the ship will be able to take on more bananas to keep up with current supply and demand. Upon completing this dredging project, the dredge will be moved to Belize City where it will operate to maintain navigable waterways for cruise ships. This dredge will assist the Belize economy in allowing the exports of more bananas and the continuation of tourism in form of cruise passengers.

Last month, DSC delivered a Wolverine dredge to Pijijiapan, a town in the Mexican state of Chiapas, on the coast of the Pacific Ocean. Pijijiapan has a population of approximately 47,000 persons (reported in the 2005 census) that greatly depend on local seafood as their main food source. In 2005, the torrential rains of Hurricane Stan caused the area’s rivers to become heavily silted, and as a result eradicated the area’s aquaculture. The community was literally starving because of the devastating effects of the weather system. Maritima Eximexico devised a plan to dredge the lagoons, restoring the channels and allowing for a healthy ecosystem to promote aquaculture. The community was so excited that they welcomed their new dredge in a parade of about 400 small fishing boats and celebrated the dredge’s arrival and the hope it brought. Since the dredge has been operating, there is already a noticeable increase in shrimp and fish, which comes at a good time as December marks the harvest season. Maritima Eximexico is working with a multidisciplinary team from the local university to create a beneficial use of the dredged material, which will be used to reintroduce mangroves to the area.

On a domestic front, DSC delivered a 14-inch Shark class dredge and 25-foot Thruster Workboat to a customer in the Midwest. The dredge was assembled and tested by DSC Field Service Technician, Shaun Pascual last month. The company will use their new dredge to maintain its harbor, which is where they load cement onto barges and receive coal to fuel their cement plant. The plant is among the world’s largest with the ability to produce more than 4 million metric tons of cement each year.

DSC’s Shaun Pascual just returned last week from assembling a 14-inch diesel Shark class dredge in upstate New York. The dredge will be used to remedy the flooding that has occurred after numerous days of rainfall following the rain and devastation of Tropical Storm Irene. As a result of all the precipitation, oversaturated soil on a truss at the north end of Lock 9 eroded and washed into the water. The dredge will be used to deepen the Mohawk River, alleviating the pressure placed on the dam.

DSC sees no end in sight as orders continue to extend the company’s current backlog. Last month, the company finalized an order from a major mining company in Russia for (3) custom DSC Shark Class dredges, specially outfitted to operate 21 hours per day in severe weather. With normal temperatures ranging from -53C to +30C, the dredges will feature an arctic package to ensure uninterrupted operations in these extremely cold conditions. DSC has outfitted other dredges for similar conditions with a fleet operating around the clock in Northern Canada. These Sharks will be used to reprocess copper and nickel concentrate mine tailings. All three dredges are portable and self propelled with the addition of thrusters, and upon arrival will be certified by the Russian Mining Inspection Authority. DSC is represented exclusively in Russia by Capital Equipment and Trading Corporation (CETCO) and its Moscow-based office, Coralina Engineering. The manufacturer also received support from the US Department of Commerce and the US Embassy in Russia in closing this new order.

So far 2011 is proving to be a strong year for DSC as orders continue to roll in. The company has experienced steady growth with each year since its inception in 1992. Currently DSC dredges can be found in over 40 different countries worldwide. 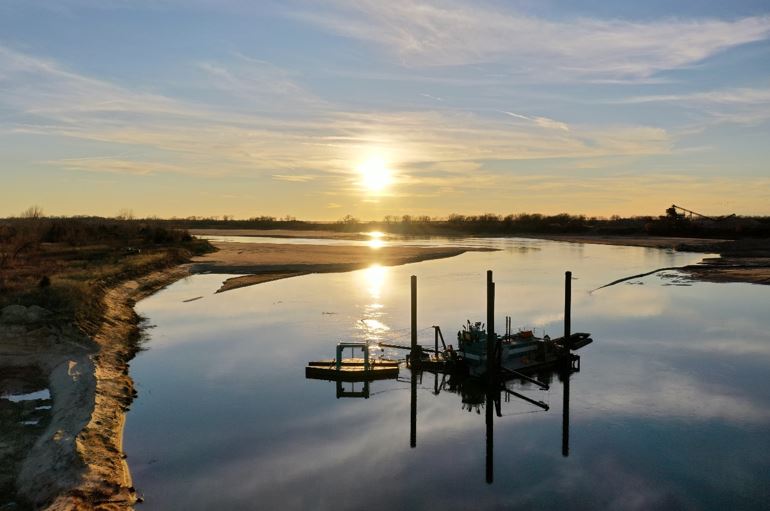