The U.S. Army Corps of Engineers and its state, federal and local partners marked the completion of a more than $9 million beach replenishment project Wednesday with a ceremony at the Coast Guard base.

Officials from the Army Corps of Engineers, the Coast Guard, the N.J. Department of Environmental Protection and Cape May City dispersed the last load of sand from the more than 620,000 cubic yards of sand placed on the Training Center Cape May’s beaches. The Coast Guard base is considered a feeder beach, and ocean currents will carry sand placed here to popular recreational beaches in the city.

“If we were standing here a few, short months ago, we’d be in about six feet of water,” said U.S. Coast Guard Capt. Bill Kelly, commander of Training Center Cape May. “The coastal erosion was the worst we’d seen here in decades, and coastal erosion was beginning to threaten our ability to conduct our vital missions here.”

The replenishment completed this week was the ninth in a series of replenishments carried out since the initial reconstruction of the Cape May beaches was completed in 1991.

Long-term erosion had left the Coast Guard base and the city of Cape May with little to no protection from the sea and little to no beach to enjoy by 1990.

A federal beach nourishment project was authorized and the Army Corps, the state of New Jersey, the Coast Guard and the city of Cape May joined forces to rebuild the beach from the Cape May inlet, at the Coast Guard base, to the end of the city beach at Third Ave.

Prior to this latest round, the last beach replenishment occurred in spring 2009. Since then, some of the worst coastal erosion in more than 20 years allowed water levels at the Coast Guard base to reach record heights. This allowed sea water to threaten the infrastructure of the training center as well as several areas used for training. This high coastal erosion also began impacting recreational beaches in the City of Cape May.

The increased threat posed by coastal erosion to Coast Guard operations at Training Center Cape May prompted USACE and the Coast Guard to make this project a high priority. The agencies partnered with the N.J. DEP and began work on the project in October 2011.

“The project has more than paid for itself in a variety of ways, by protecting this vital Coast Guard base from erosion, by saving the precious community of Cape May from storm damage, (and) by ensuring that there are wide and inviting beaches for residents and tourists alike to enjoy,” said Lt. Col. Philip Secrist, commander of the U.S. Army Corps of Engineers’ Philadelphia District.

The Great Lakes Dredge and Dock Company, the principal contractor on the project, pumped the 620,000 cubic yards of sand from the borrow area offshore to Coast Guard Training Center Cape May. A subcontractor, Arthur R. Henry, Inc., executed the backpass operation.

As part of the backpass operation, the Army Corps altered the grade or slope of the beach in the affected sections of the beach in an effort to address concerns about injuries. Critics contend that beach replenishment leads to an increase in injuries suffered by swimmers and body surfers.

But the Corps is committed to investigating the concerns raised, officials said, and mitigating them in the interest of safety if they prove valid. 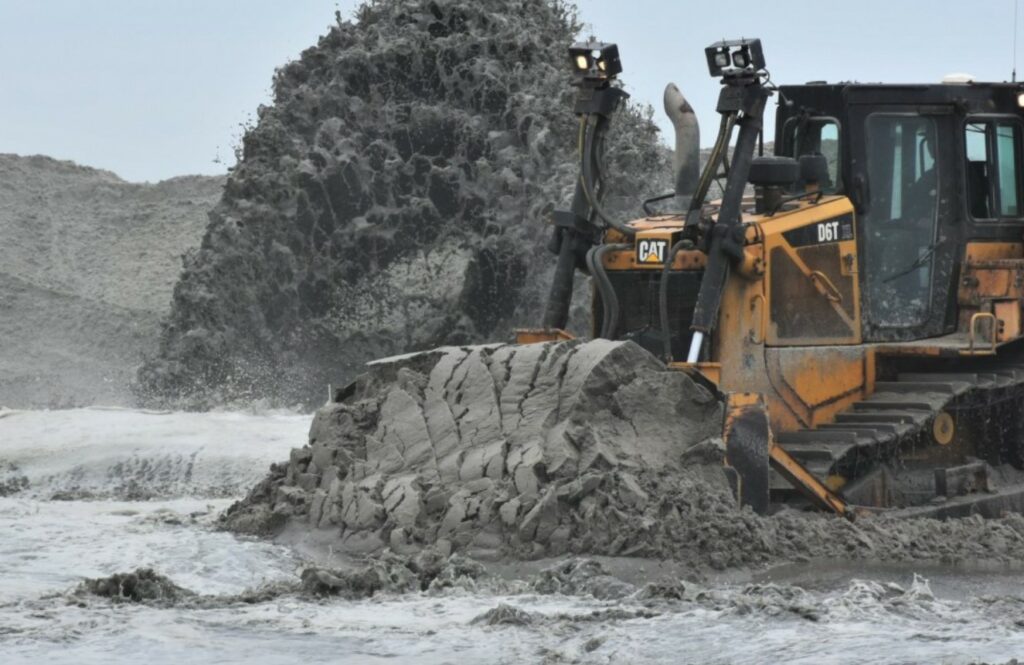