Lootah said that the most important project is Dubai Safari Project, which will be located in Al Warqa 5 in Aweer Road in an area 400 hectares and includes Dubai Safari, Butterfly Park, golf courses, entertainment and recreational areas.

Dubai Safari that covers 60 hectares of the total area is aimed at establishing the best center for wildlife in the world, providing a variety of environments appropriate to different animals, attract visitors from different parts of the world and use modern interactive methods in control and movement to ensure the distinctive and unique experience for visitors.

The stages of project include site preparation, preparing internal roads and infrastructure, gardening, landscaping and water bodies, transfer the existing zoo in Jumeirah to the new location and other facilities such as means of transport, restaurants, rest areas … etc.)

Eng. Mohammed Noor Mashroom, Director of General Projects Department explained the second project Dhow Wharfage Development at Deira Corniche, which is aimed to construct an additional integrated infrastructure to facilitate an increase in dhow trade through Dubai, which will make Dubai the economical center of import and export activities in the region.

The wharfage has been designed with a depth of 7 meters below the low water level and with all necessary anchorage elements; this will allow Dubai Creek to receive and anchor bigger dhows which couldn’t enter before. This project includes new quay structures and associated dredging and reclamation, including the supporting services and infrastructure such as entry and exit reporting wharves, administrative and control buildings, sailor’s facilities and re-fuelling wharf.

All safety precautions have been followed according to international standards through providing an integrated fire fighting network as well as security services, police, rescue and civil defense facilities and berths. The project works include providing all major services including internal roads, water, electricity, telecommunication, and sewage networks. Also, a lighting network will be provided for the whole wharfage area which will facilitate cargo handling work during the evening hours.

Construction of the project will require the excavation and dredging of 390,000 m3 of sand from the seabed adjacent to the wharf site, and this amount will be re-used for the reclamation works of the wharfage. According to the project plan, construction works will commence at the beginning of June 2012, with the completion and operation of Phase 1 (60% of the wharf) after 12 months, and the second phase will be completed by end of year 2013.

Eng. Ibrahim Mohammed Ibrahim Ali Juma , Head of Coastal Engineering Unit explained the project of Completion of Business Bay Canal and its Connection to the Sea.

Ibrahim said that the aim of this project is to revive Business Bay Canal as a part of an integrated marine system which will improve the environmental state of the canal, as well as the upper part of the creek. Also, this project will enhance the economical state of the area adjacent to canal by transformation into an attractive business waterfront. It will also provide a chance to use the Business Bay Canal for navigation. It will create a unique water body suitable for leisure navigation purposes

A complete hydrodynamic study has been done by Dubai Municipality to ensure proper water circulation in both Business Bay Canal and the inner part of Dubai Creek, as well as, the efficiency of the near future inclusion of Meydan canal in the overall system.

The project consists of two phases:

Phase 1: involves the connection of Business Bay Canal with sea through a pipeline system connecting the sea to the side of canal adjacent to Sheikh Zayed Road.

The pipeline system of an overall length of about 3 km will be realized by adopting “Micro-Tunneling” technique, which will allow the pumping process to proceed without impacting any existing utilities or services as well as not requiring any diversions to be done to roads or services lines.

Also, the water intake will be done using the “Pipeline Intake” technique, which does not require the construction of any breakwaters, thus preventing any harm to the coastal and marine environment.

Phase 2: Completion of the canal waterway through connecting the existing lagoons.

This phase consists of carrying out the dredging works for the remaining parts of the canal, estimated by an amount of 750,000 m3. In addition, the canal quay wall of a length of 1.2 km will be completed. 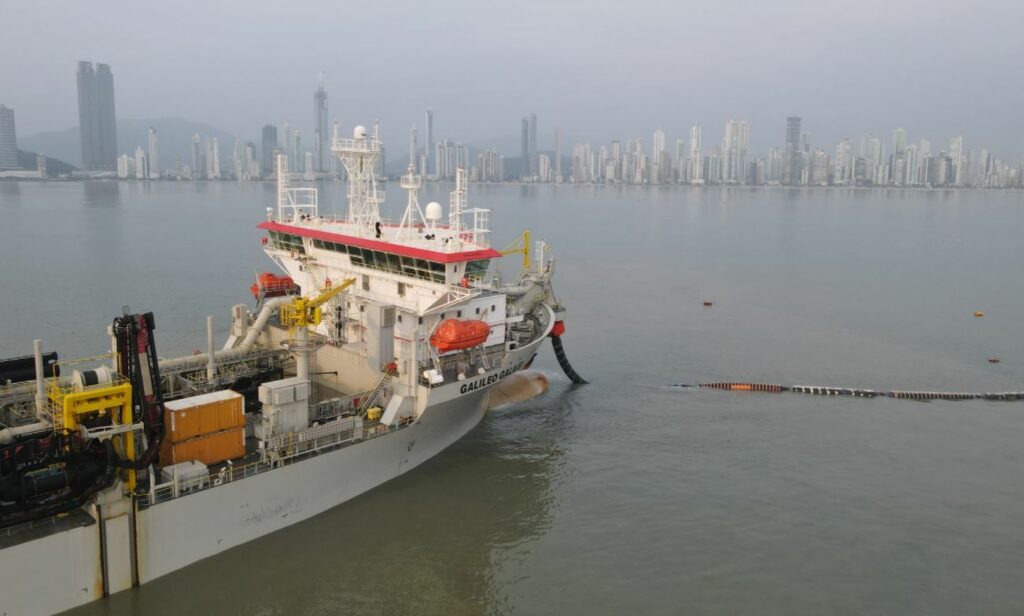