The order was given in the presence of the Flemish ministers Hilde Crevits and Geert Bourgeois, port alderman Marc Van Peel and Port Authority CEO Eddy Bruyninckx. Once the new headquarters is handed over in 2015 the Port Authority will overcome the urgent shortage of space in its present headquarters. But beyond that the new Port House will stand as a symbolic gateway to the port area.

The actual construction work will start on 1 October 2012 and will take 33 calendar months.

The new Port House is a two-part design, consisting of a dynamic beam-shaped structure raised above the former fire station, a listed building which is being restored and given a dramatic new role. The two components make the Port House a volumetric composition that offers breathtaking views across the city and its port. The superstructure façade is made up of glass triangles, each slightly rotated with respect to each other, producing a constantly changing play of reflected light. The unusual design also poses a challenge for the contractors who will do the actual building work.

For example, the subcontractor responsible for the 1500-tonne steel structure, Victor Buyck Steel Construction, has opted to build it in a modual way in six large parts. These will be constructed in workshops in Wondelgem and carried to Antwerp by barge.

The new building will provide a workplace for some 500 Port Authority employees. Some of the landscape offices and meeting rooms will be housed in the existing building, the former fire station. These areas will be accessed from the central atrium. There are also open-plan offices and meeting rooms within the new volume, but in addition there will be an auditorium and a company restaurant with a panoramic view. Staff and visitors will access this part by panoramic lifts.

Flemish minister Geert Bourgeois, responsible for Real Estate Heritage, is full of admiration for the efforts made by the Port Authority to preserve and repurpose the 90-year-old fire station, giving it a new future while continuing to serve the public and the port. “The project largely respects the material integrity of this historic building,” he declared. The minister has granted a subsidy of 2.1 million euros for restoration of the fire station.

Altogether the new Port House will cost 49.9 million euros. This investment forms part of the wide-ranging investment programme of 1.6 billion euros approved by the Port Authority board of directors in 2010. The financial effort represented by this plan will ensure that Antwerp can further reinforce its position as the second-largest port in Europe, and that Port Authority employees will have the necessary resources to provide high-level service for customers of the port.

For example, in the near future the tug fleet will acquire a series of new tugs, while the dredger fleet will acquire new hopper dredging barges. “These investments are less visible to the outside world than the architecture of our new headquarters, but they are just as essential for our operations,” explained port alderman Marc Van Peel.

Connection between city and port

“With the new Port House we have given a face to the world-class port that Antwerp undoubtedly is. With its dynamic, ambitious and innovative design it stands as a symbol for our port,” Van Peel continued. “From the new buildiong visitors will have a truly impressive view over the city as well as the port, so further strengthening the dialogue between the people of Anwerp and their port.”

Flemish minister of Transport & Public Works Hilde Crevits added: “The new Port House designed by Zaha Hadid will be a proud landmark for Antwerp. The striking design will give Antwerp a wonderful architectural jewel that matches its position and importance as a world port. Along with the MAS museum and the new Port House, the new Antwerp Coordination Center will further consolidate this position. In functional terms the new coordination centre will bring together all the actors in the chain of shipping traffic management physically together on a single platform, while the building itself designed by the architectural firm of Neutelings-Riedijk will also be distinctive. Together, these three landmarks will bind the city and the port close together.” 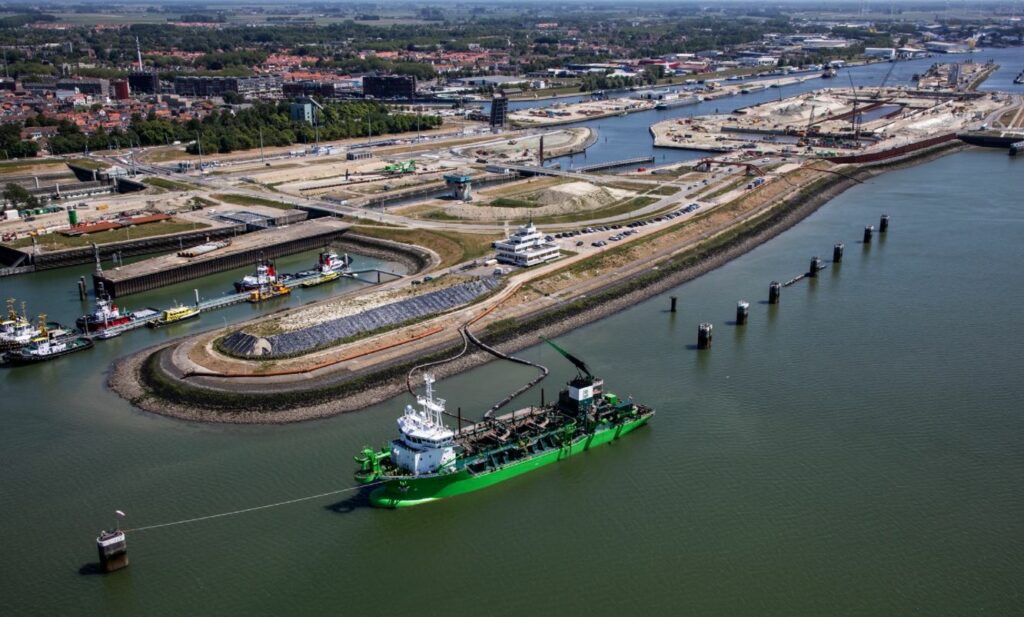