The suction dredger “Eke Möbius” built by the Sietas shipyard was today ceremoniously christened at the Cruise Center at Hamburg’s harbour. It is the second such vessel built by Sietas for Josef Möbius Bau-GmbH. The design and construction of these complex ships marks a successful premiere for the shipyard.

Part of the STRABAG Group of Austria and based in Hamburg, Josef Möbius Bau-GmbH is one of Germany’s leading hydraulic engineering companies. It ordered the two suction dredgers in 2008. The first of them, the “Werner Möbius”, was delivered in November 2010.

Monika Breuch-Moritz, President of the Federal Maritime and Hydrographic Agency (BSH) christened the “Eke Möbius” in front of 250 invited guests from the worlds of business and politics. She was accompanied by Hans-Joachim Otto, undersecretary of the Federal Ministry of Finance and Technology and the Federal Government’s maritime coordinator, and Senator Frank Horch, Hamburg’s Minister of Economy.

“Today’s handover is a fantastic success for the Sietas shipyard, meeting all quality, delivery and budget stipulations,” said Dr. Tobias Brinkmann at the ceremony, who managed this project as part of the insolvency administration process. “It is the third ship to be completed and delivered during the Sietas shipyard’s insolvency proceedings and sees the shipyard make another important contribution to maritime expertise in Hamburg. The shipyard is continuing to work flat-out on the first wind-power installation vessel for delivery next year. Negotiations have already begun for the second such vessel.”

Through the application of the latest technology and a diesel-electric drive, the “Eke Möbius” points the way forward, not least in respect of the reduction in carbon-dioxide emissions, as it falls below all limits. The ship is 118.47 metres long with a displacement of 6.8 metres and has four diesel engines that together develop 6,760 kW. It can dredge at a depth of up to 35 metres. The “Eke Möbius” has cargo capacity of 7,350 cubic metres and runs at 13 knots an hour. While suction dredging it has a top speed of two knots. An innovative type of power management for the generators and electric engines, as well as for travelling drive and dredging pump operation, ensures minimal diesel consumption, wear and emissions. The dredger has space for a crew of 16 including captain, officers, engineers, dredging master, electricians and deck hands in 24-hour operation.

It took 12 months to build at the Sietas shipyard. 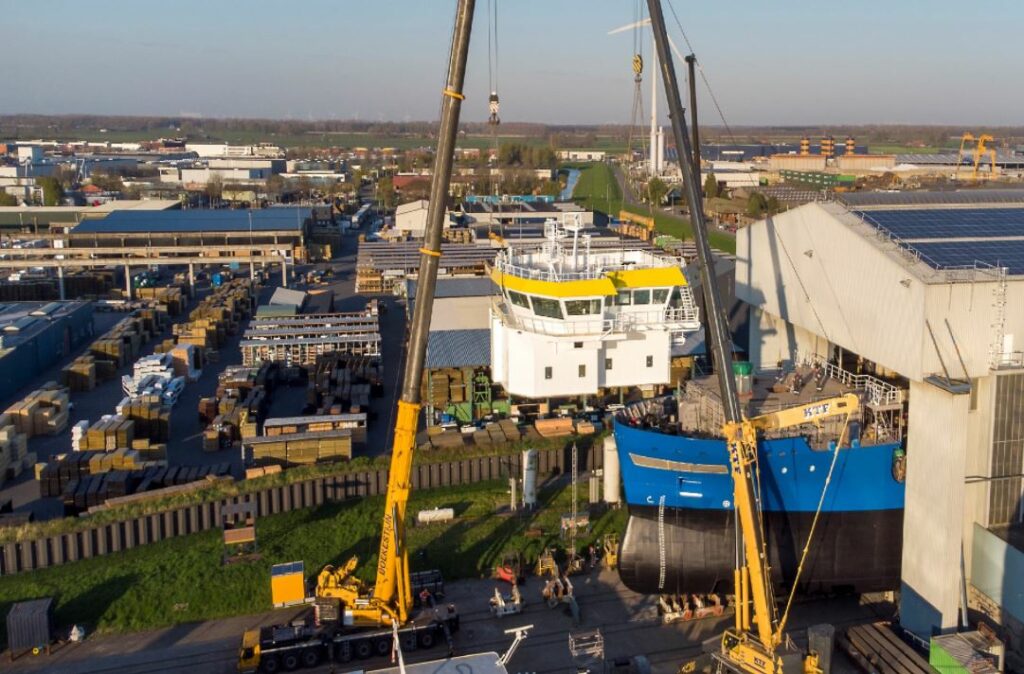