The 20th edition of the World Dredging Congress and Exhibition, also known as WODCON, took place on 3-7 June 2013 at the Square – Brussels Meeting Center in Brussels, Belgium. It was organised by CEDA one of the constituent associations of the World Organisation of Dredging Associations, WODA.

During 4 days delegates could meet with 474 colleagues from 31 countries, attend and listen to 95 technical presentations and 2 keynotes, take part in 3 networking events, not counting lunches and coffee-breaks, join 3 technical tours, and visit more than 45 exhibition stands – all under the roof of WODCON XX.

On Tuesday 4 June, during the Opening Ceremony, the Flemish Minister of Mobility and Public Works, Mrs. Hilde Crevits, officially welcomed delegates to the Congress and gave a speech about the role of dredging in the current developments in the region.

To celebrate the occasion of the 20th edition of WODCON, delegates made a trip down the memory lane, viewing a short video covering a time span of 46 years from WODCON I in 1967 in New York, USA to WODCON XX. The video in which faces and moments of the past WODCONs came back briefly to focus was also a testament to the incredible development of dredging technology in the last half century. The Opening Ceremony ended with the amazing performance of the Belgian singing group Lais, a nice surprise to everyone.

An exceptional concentration of knowledge and experience

The core of the congress, the technical programme kicked off with the presentations of two excellent keynotes: First, Mr. David McGillewie, Deputy Chief Engineer of Transnet National Ports Authority of South Africa spoke about upcoming capital dredging works in the ports of his country; Mr. Rogelio A. Gordon, Head of Dredging Operations of the Panama Canal Authority followed with an overview of the Panama Canal expansion and its far-reaching effect on economy and trade.

In the technical sessions that followed through three days, running in two or three parallel tracks, around 95 peer reviewed technical papers were presented by experts from all over the world. The speakers addressed the design and execution of dredging projects and tools from mathematical models to machines – a combination of knowledge, understanding and skill. The basic headings included the following:

The Congress programme also included a highly interactive session “The Dredging Debate”, during which participants were challenged to consider and to take a stance about some of the so called hot dredging topics of today. The WODA Technical Guidance on Underwater Sound in Relation to Dredging and the CEDA Information Paper Ecosystem Services and Dredging and Marine Construction were also presented in this session.

A wide spectrum of products and activities on show

The exhibition hall – dubbed as the living room of WODCON XX- the place where delegates gathered between the technical sessions. Leading international companies from around the globe were on hand covering a wide spectrum of products and activities, including dredgers and mining vessels of all sizes, equipment, software for oceanographic services, satellite-based positioning systems, rubber hoses, winches and steering gear, dredging instrumentation and automation systems, offshore marine engineering, vessel repairs, hydrographic and geotechnical surveying, and measuring and monitoring systems.

In the evenings an enticing social programme offered further opportunities for networking, relaxing and having a good time with friends. On Monday 3 June, at the Ice-Breaker in the exhibition area, delegates could get a first taste of Belgium taking part in the cheese and beer discovery tour. The next evening delegates enjoyed the cocktail at the exquisite Brussels City Hall reception where they also had a possibility to take part in the tour around the magnificent rooms of the historical building Hall. On Wednesday, delegates and guests were invited to the Gala dinner at a prime Brussels’ location, the Autoworld, to celebrate the successful congress and the 20th anniversary of WODCON with a birthday cake.

While delegates were working, partners had a wonderful time taking in the historical and cultural sights of Brussels and Bruges, one of the prettiest towns of northern Europe and creating and tasting their own chocolate bars.On Friday, after three days of an intensive schedule of presentations, interested delegates could get a close-up view of one of the three landmark projects: the Deurganck Dock Lock, the AMORAS mechanical silt dewatering plant or the Sigma flood protection plan.

WODCON XX also marked the presentation of the WODA Principles of Sustainable Dredging, an agreed statement on 21st-century dredging issued by the associations that form WODA, CEDA, EADA and WEDA. The Principles emphasise the need to work in harmony with natural processes and the site-specific characteristics of ecosystems. Projects should take into account social, environmental and economic objectives and should engage a broad range of stakeholders from the start. The Principles also state that beneficial use of dredged materials should be a priority.

To encourage the highest standards in research and presentations two paper awards have been presented at WODCON XX:

• The Young Authors Award by the International Association of Dredging Companies (IADC) with a €1,000 cash prize was presented for the paper “The art of screening: effectiveness of silt screens” by Max Radermacher – Delft University of Technology, Fokko van der Goot and Daan Rijks – Boskalis, and Lynyrd de Wit – Svasek Hydraulics, the Netherlands;

• The Best Paper award offered by the Dredging Contractors of America (DCA) worth of $500 was given for the paper “Far-field and long-term dispersion of released dredged material” by Thijs van Kessel and Bas van Maren, Deltares, the Netherlands. 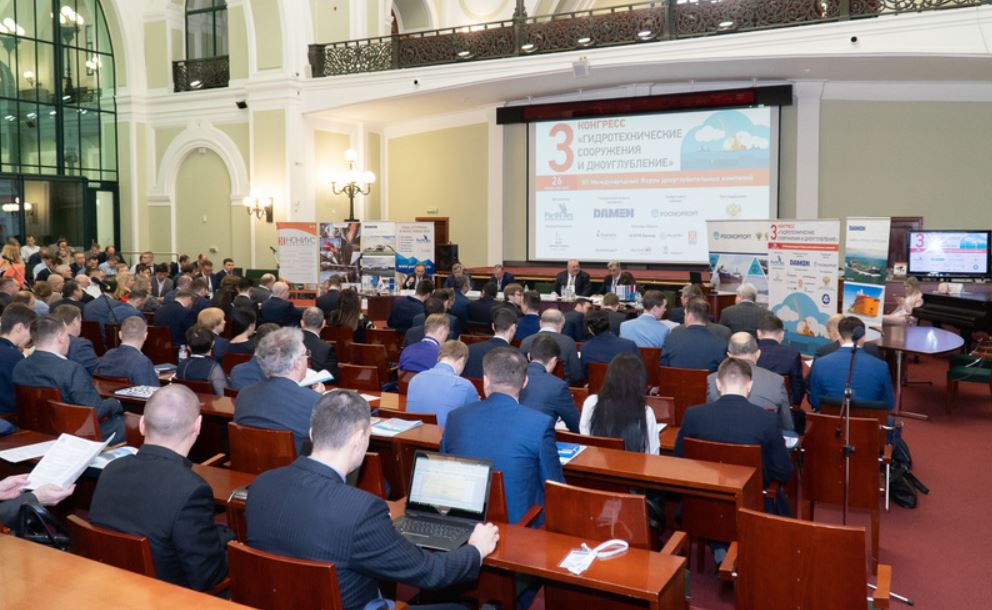