Governor Bobby Jindal and local officials yesterday highlighted a shoreline restoration project east of Holly Beach in Cameron Parish. The project is restoring miles of eroded beach devastated over many years, most recently as a result of Hurricanes Ike and Rita.

The restoration project mines sand from federal waters in the Gulf of Mexico and transports it onto the Cameron Parish shoreline, restoring a beach that was eroded to the point of threatening the only east-west highway in the parish and one of the main routes for evacuations, State Highway 82/27.

The Governor and officials walked on the new stretch of sandy shoreline created by the project, treading on new sand that just days before lay under water 20 miles offshore. Prior to the project, the shoreline had been retreating at a rate of from five feet a year to 30 feet a year in some areas.

Governor Jindal said, “This shoreline has been ground zero for many of the catastrophic hurricanes that have savagely attacked Louisiana’s coast. Through this project, we are restoring what was taken from us because protecting our wetlands, ecosystems, wildlife and natural resources is important, but so too is protecting our people, our homes, and all the things that make it possible to live and work and raise our families in our great state. That is why we are here. We are also protecting State Highway 82/27 – which is a major transportation and evacuation route for our people in this parish and it is vitally important to this area.”

“Billions of dollars of investments are bringing a new vitality to this treasured part of our state,” said Governor Jindal. “This progress is a result of our firm commitment to projects like this that protect our families and their homes, and to not only rebuild and protect our infrastructure, but to do it in the most sustainable way possible.”

The shoreline restoration project is overseen by the Coastal Protection and Restoration Authority of Louisiana (CPRA), the authority created by the state after the 2005 hurricanes to oversee all coastal and flood control projects following Hurricanes Katrina and Rita. The CPRA is rebuilding shorelines and barrier islands across Louisiana, all part of its 50-year master plan to combat and reverse the ravages of 80 years of coastal land loss.

“Southwest Louisiana has not been forgotten in this fight; in fact, we have about one billion dollars in projects on the drawing board that we are ramping up,” said Garret Graves, chair of the CPRA and Governor Jindal’s executive assistant for coastal activities.

The $45.8 million project is being paid for entirely with state funds set aside for shoreline restoration by Governor Jindal and the Legislature. Hopper dredges collect sediment from the sand-rich Sabine Shoal in waters of the Gulf of Mexico. The dredges then dock near the mouth of the Calcasieu Ship Channel and their contents are pumped via pipeline and discharged to build up the shoreline. As the project proceeds westward, additional pipe is added. The pipeline currently extends 16,650 feet.

Since the project started earlier this year, 1.2 million cubic yards of sand have been pumped to build the first 3 miles of beach and dune. The total project volume is estimated to be approximately 2 million cubic yards, covering nearly 5 miles. With the westward sand migration, engineers estimate that the project will benefit up to 8 miles of beach. The re-nourished beach extends back approximately 150 feet from the water’s edge on the eastern end of the project and then increases to 285 feet for the remainder of the project.

The project is also protecting State Highway 82/27, which acts as a major evacuation route and is the only barrier separating the Gulf from the uplands and wetlands to the north. This includes the Sabine National Wildlife Refuge, the Calcasieu River and ultimately the entire natural buffer and protector between the shoreline and Lake Charles. Without the levee-like protection of the highway, an estimated 40,000 acres of freshwater wetlands to the north could be subject to saltwater intrusion, erosive wave action and loss. The wetlands of Cameron Parish also serve as a protective buffer for more heavily populated Calcasieu Parish and Lake Charles. 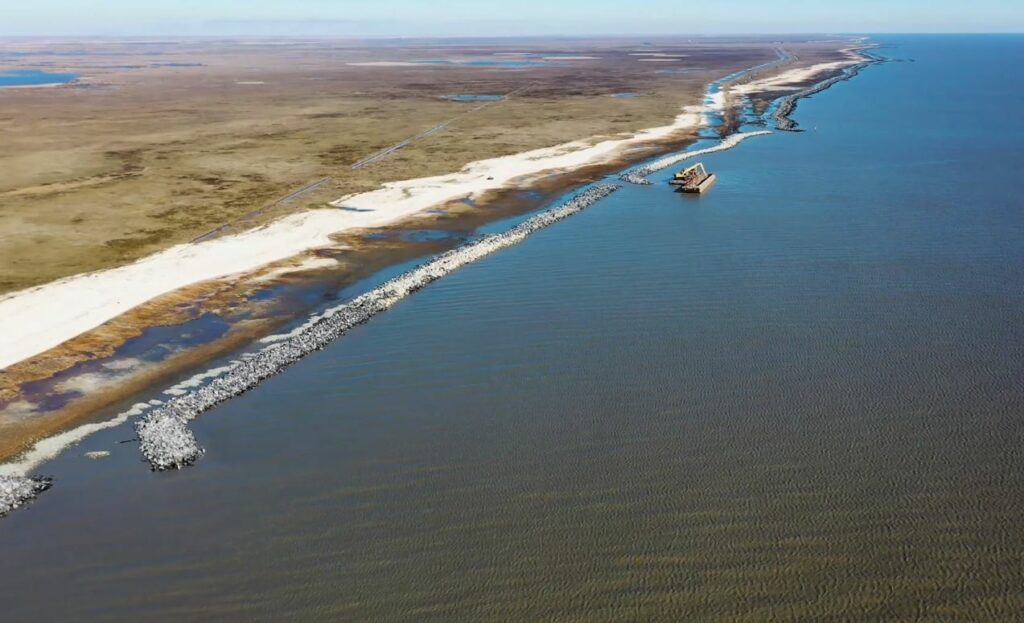