Since the beginning of 2014, DEME managed to  maintain its order book at a fairly high level of about 3.0 billion EUR thanks to new orders, well spread worldwide across dredging, energy related and environmental activities. The total value  of these new orders represents approximately 660 million EUR.

In Porto Sudeste, Brasil, the ‘Porto Sudeste SA’, a JV company of Trafigura, Mubadala and  MMX, awarded the capital dredging works for deepening of the channel and turning basin of  their port in the Sepetiba Bay, Rio de Janeiro, to DRAGABAS (DEME’s subsidiary in Brasil),  including rock blasting and drilling works.

In Miraflores, Panama, DREDGING INTERNATIONAL PANAMA (DEME’s subsidiary in  Panama) will perform the maintenance dredging works of the Pacific entrance of the Panama  Canal at ‘Miraflores Approach’ and ‘Balboa Reach’. A volume of close to 2.000.000 m³ located  in the approach to the ‘Miraflores’ locks and in the area of the New Fueling Facility Basin  (NFFB) needs to be removed for the account of the ‘Autoridad del Canal de Panama’.

In Russia, a contract was signed between the Russian construction company OJSC ‘USK  MOST’ and DEME’s Russian subsidiary MORDRAGA for the construction of the approach  channel and harbour basin of the service port of the new LNG terminal in Yamal Peninsula  and sea channel in Ob Bay, 2500 km North East of Moscow. This new port in the north of  Russia is an export port for LNG carriers towards the East and the West.

Works will be executed in different phases over the years 2014 till 2017. The high DEME  environmental standards and proposed complementary impact mitigating measures were  instrumental in the award of the project.

In India, ‘Adani Port & Special Economic Zone’ has awarded a contract to INTERNATIONAL  SEAPORT DREDGING (ISD), DEME’s Indian subsidiary, for the 2014 – 2015 maintenance  dredging campaigns in the channels and turning basin of the Dhamra Port.

In Canada, Nalcor Energy contracted TIDEWAY to perform cable protection works in the Strait  of Belle Isle submarine cable corridor, which is 36 km in length and consists of three HVDC  submarine cables. Tideway’s newest fall pipe vessel ‘Flintstone’ will install a rock berm to cover  each cable individually within the cable corridor between the Shoal Cove and Forteau  submarine landfall. Cable protection will be accomplished using subsea rock installation in  deep water portions. Cable and berm stability and integrity must be ensured along with  protection of the cables with consideration for high environmental conditions, local fishing  activities and commercial traffic.

In China, TIDEWAY signed a contract with China Offshore Oil Engineering Corporation  (COOEC) for rock installation works at the South China Sea Deep Water Gas Development  LW3-A Project. The Liwan 3-1 gas field is located in the South China Sea, approximately 300  km south of Hong Kong in 1,500 m water depth. COOEC is in charge of the installation of a  central platform (CEP), which receives and processes gas from the Liwan 3-1 gas fields, and  the installation of a 30” export oil/gas two-phase pipeline from CEP to the China National  Offshore Oil Corporation (CNOOC) Gaolan Gas Plant. Tideway is contracted to install rock  over those areas which are not sufficiently trenched.

GEOSEA consolidates its position in the renewable energy market, securing geotechnical site  investigation works for the Fécamp offshore wind farm site in France. Works will be executed  during summer 2014 for the account of WPD Offshore France SAS.  Just a few weeks ago, GEOSEA finished all installation works including foundations, wind  turbines and infield cables at the Northwind wind farm off the Belgian Coast. More recently,  topside installation on Amrumbank West and Butendiek offshore wind farms in Germany  were completed.

In Belgium, DEC (DEME ENVIRONMENTAL CONTRACTORS) secured two seven-year  contracts with “NV Waterwegen en Zeekanaal” for the treatment of dredged sediments to be  performed in the various treatment centres. The works areas are situated along the  Bovenschelde, the IJzer and the coastal channels. 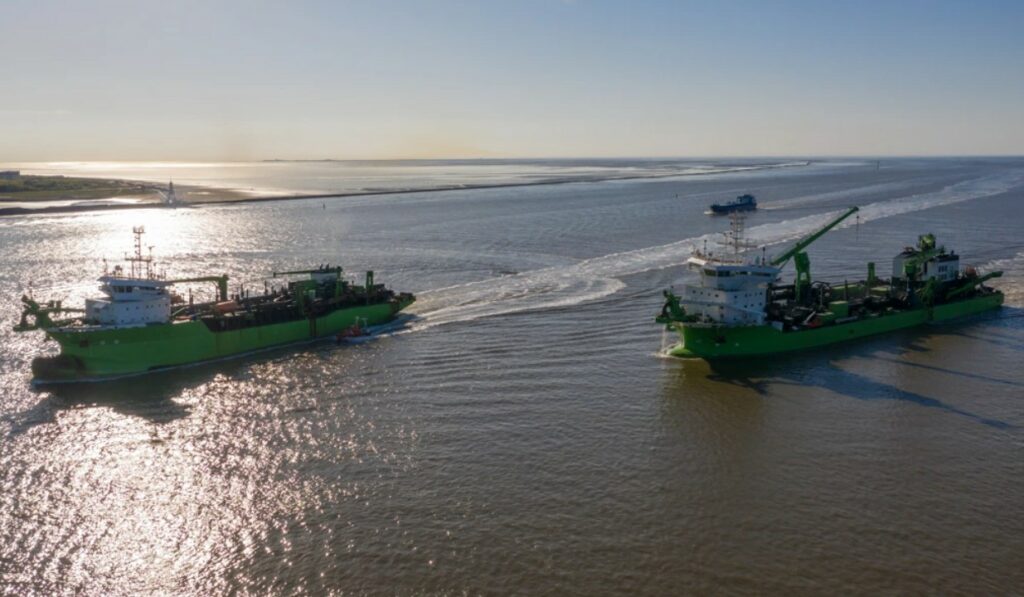