The U.S. Army Corps of Engineers’ Philadelphia District has partnered with state, local, and non-profit organizations on a marsh restoration demonstration project along the New Jersey Intracoastal Waterway near Stone Harbor and Middle Township, N.J.

The U.S. Army Corps of Engineers, New Jersey Division of Fish & Wildlife, the Nature Conservancy, and the Wetlands Institute joined efforts in the past year on the initiative. The ongoing project is designed to beneficially use dredged material to restore marsh and create habitat on marsh land owned and managed by the New Jersey Division of Fish & Wildlife.

Dredging and placement activities are funded by the Disaster Relief Appropriations Act of 2013 (Public Law 113-2, also referred to as the Hurricane Sandy Relief Bill) through an existing U.S. Army Corps of Engineers’ Philadelphia District contract with Barnegat Bay Dredging Company.

USACE contractors began dredging the federal channel of the New Jersey Intracoastal Waterway on Aug. 11 and have removed approximately 7000 cubic yards of fine-grain sand from a critical shoal in the waterway near channel marker 421.

“We’re working to find ways to improve coastal navigation and use the dredged material in a beneficial and cost-effective way,” said USACE Project Manager Monica Chasten. “This is an example of the Regional Sediment Management approach – we balance the need for dredging for navigation purposes with the fact that sediment can be a resource for ecological and shore protection purposes. Our hope is the project can serve as a model for future efforts.”

Dredging is necessary along the New Jersey Intracoastal Waterway to ensure safe maritime navigation. When the dredged material is clean and suitable sediment, USACE looks for opportunities to reuse the material. In the past, dredged material was pumped into confined disposal sites cut off from coastal processes.

“We’re trying to keep clean sediment in the system when appropriate,” said Chasten. “This project is a win-win because we’re addressing a public safety issue along the waterway and restoring critical habitat and building system resilience.”

Coastal marshes have been degraded by a combination of subsidence and sea-level rise, making them more vulnerable to erosion, loss of marsh grasses and loss of nesting habitat for birds such as the state-endangered black skimmer.

When the project is complete, partner organizations will provide monitoring and analysis of both ecological and economic benefits of the process.

In addition to restoring habitat, USACE will continue demonstration efforts and conduct thin-layer placement along marsh adjacent to the New Jersey Intracoastal Waterway through early September. Thin-layer placement involves pumping several inches of clean fine-grained sediment onto the marsh, providing a foundation for marsh grasses to take root. This method can be a sustainable solution when dredging small quantities of sediment.

“Barnegat Bay Dredging Company has been innovative and resourceful in finding ways to construct the project and accomplish the goals,” said Chasten.

USACE and partner organizations are planning future efforts to beneficially reuse dredged material along other stretches of the New Jersey Intracoastal Waterway. 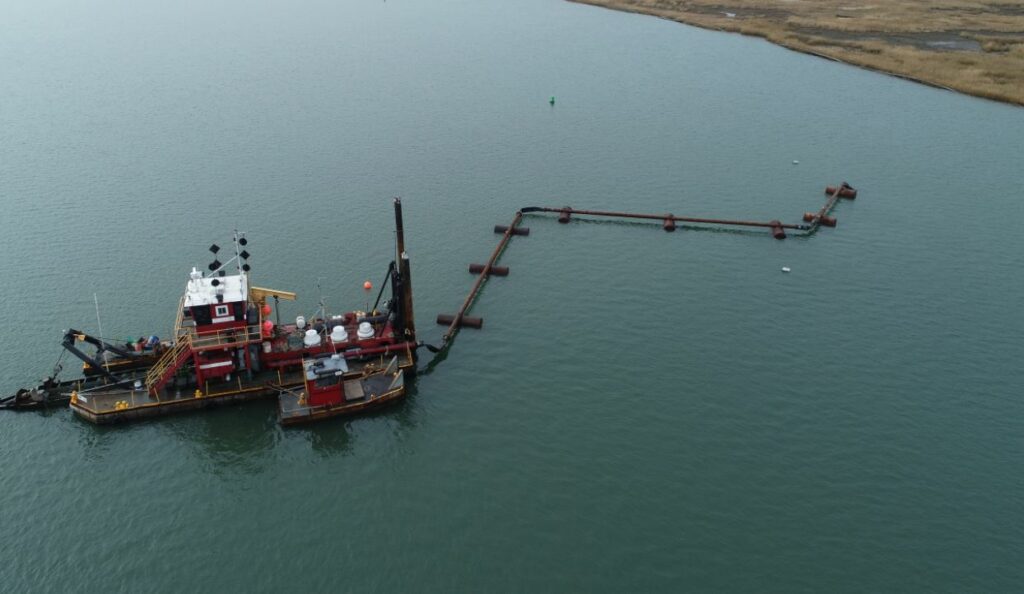