The U.S. Environmental Protection Agency has announced that the first of nine environmental impairments, which caused the St. Louis River to be included on a binational list of Great Lakes Areas of Concern, has been lifted one year ahead of schedule.

The St. Louis River is one of 43 contaminated sites on the Great Lakes designated as a Great Lakes Area of Concern by the United States and Canada under the 1987 Great Lakes Water Quality Agreement.

“Today is a great day for the St. Louis River and for Lake Superior. Floating oil, tar residue, grain dust and foam are no longer visible in this Area of Concern,” Hedman said. “Together, we are making real progress to accelerate the actions needed to restore habitat and to clean up the largest freshwater estuary in the world — the headwaters of the largest surface fresh water system in the world.”

Since the early 1990s, EPA, the U.S. Army Corps of Engineers, the National Oceanic and Atmospheric Administration, the U.S. Fish and Wildlife Service and the States of Minnesota and Wisconsin have spent approximately $33 million to remove contaminated sediment and restore habitat in the St. Louis River Area of Concern. Federal funding accounts for over $24 million of that sum – with the lion’s share provided through the Great Lakes Restoration Initiative since 2010.

“Today’s announcement is tremendous news for the ecology and the economy of our region – a clear sign that while there is much work left to be done, we can now look to a day in the not too distant future when the St. Louis River will be fully restored and removed as an Area of Concern,” said Congressman Nolan. “Federal agencies and everyone in Minnesota and Wisconsin involved in this ongoing project deserve great credit for their hard work and persistence. For my part, I will continue to do everything in my power to assure that the necessary resources are available to assure that future generations will enjoy and benefit from the St. Louis River in the clean and pristine state it was intended.”

“I’m proud to see the great progress that is being made in the Saint Louis River Area of Concern through the support of the Great Lakes Restoration Initiative, alongside state and local involvement,” said Congressman Duffy. “This targeted and coordinated investment improves the economy, quality of life, and environment not only for the Superior-Duluth area, but for communities all across the Great Lakes.”

“If beauty is in the eye of the beholder, we are pleased to say that we all agree that the St. Louis River estuary’s beauty has been dramatically improved,” said Minnesota Pollution Control Agency Commissioner John Linc Stine. “This is a historic day for the St. Louis River estuary as we celebrate this first of what we hope will be nine steps forward to remove impairments. It’s been just one year since the plan was approved, and we have shown that the team has a ‘get it done’ attitude. With tremendous support from the Great Lakes Restoration Initiative and Minnesota’s Clean Water, Land and Legacy Funds, and the federal-state partnerships, the future removal of the 8 remaining impairments looks to be within our reach.”

“Wisconsin is proud to be part of the positive momentum and progress underway to restore the St. Louis River Area of Concern,” said John Gozdzialski, Wisconsin Department of Natural Resources Secretary’s Director for Northern Wisconsin. “For over 25 years, area citizens have worked with government agencies to support river cleanup. Through our hard work and strong partnerships we celebrate restoring the first of nine problems within the estuary. These actions have successfully restored beauty to the river for the citizens, businesses and the surrounding communities that call it home. We have and will continue to harness the collective energies of the partnerships to restore health to the river and support the local communities and the economy.”

“The St. Louis River estuary is an incredible resource for fish, for ducks and other wildlife, and for outdoor recreation. It has the potential to be even better,” said Minnesota Department of Natural Resources Commissioner Tom Landwehr. “I am pleased to see that the investments we have been making to clean up the river and restore habitat are paying off and benefiting the people of Minnesota and Wisconsin. We are committed to strengthening our engagement in this unique partnership and I look forward to removing the rest of the impairments from the list over the next several years.” 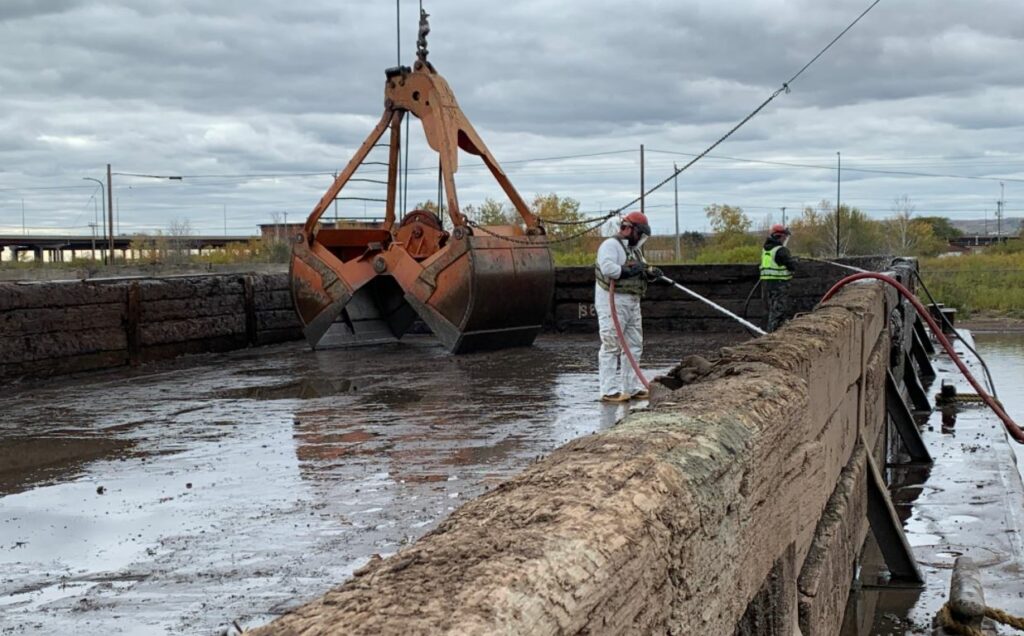