Northbound commerce with as many as 49 barges moved through the restricted portion of the river at Fair Landing during daylight hours.

This helps speed the clearing of the daily queue and reduces the wait time for southbound vessels. Work is also proceeding well in the narrowest reach of the restricted area and the Corps expects normal, unrestricted one-way traffic to resume after Monday, November 17, when the mat sinking unit completes its work in the narrow section and moves to a wider section of Fair Landing.

The Mississippi Valley Division’s mat sinking unit resumed operations at 6:00 a.m. yesterday after the queue of 18 tows was cleared at 2:30 a.m.

Maj. Gen. Michael Wehr, commander of the Mississippi Valley Division, stated: “We are working closely with the Coast Guard and the towboat captains to clear the traffic queue as quickly as we can each night. As we continue our conversations with navigation industry leaders and the Coast Guard, we’ll assess performance of the traffic queue management system and review operational results.”

And based on discussions held Nov. 11, the group agreed that the mat sinking unit should not work and allow scheduled crew rest Nov. 15-16.

Vessel restrictions were imposed during daylight hours along a narrow reach of the river at Fair Landing to allow for crucial repairs to the river banks damaged during the 2011 flood. The bank protection work must be done when river levels permit (typically between August and December), as it can’t be performed during high river stages, which typically occur during the rest of the year.

Maj. Gen. Michael Wehr added: “Channel stabilization and protection of the river banks are critical not only to our flood control and flood risk management mission, but also to our navigation mission – the revetment process ensures alignment of the navigation channel. The large bank scours caused during the 2011 flood in the Fair Landing area could threaten navigation channel stability and the mainline levee system during a high water event.”

The repair work and future repairs will stabilize the navigation channel and allow for two-way traffic to pass. Currently, the narrow bend along this reach of river passes one-way traffic under normal conditions. Since restrictions were implemented, approximately 131 tows, pushing a total of 2,237 barges, have safely traveled past Fair Landing. 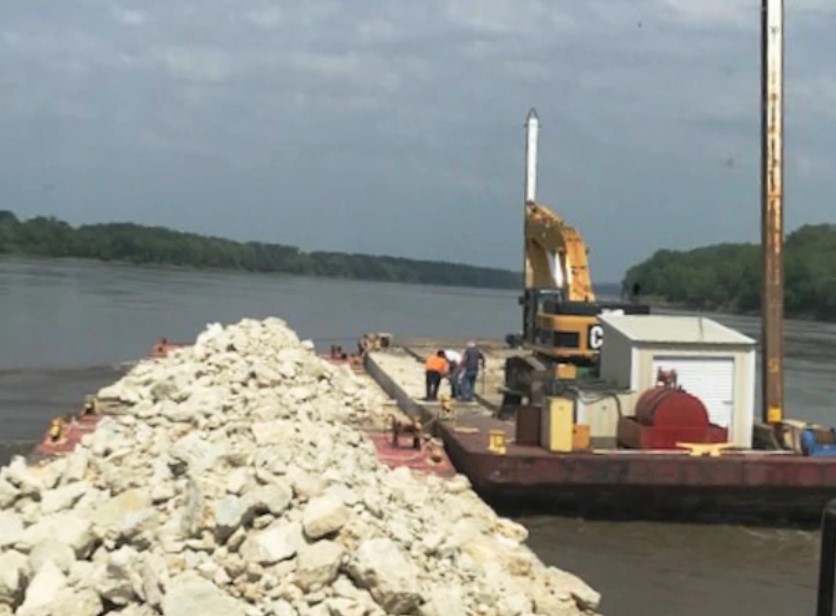