Members of the Harbor Advisory Committee paid a site visit to the new Cowes Breakwater today, Tuesday 29th September, to get a close-up view of the 350-meter long structure and learn about the construction process from contractor Boskalis Westminster.

Ben Willows, Chairman of the Advisory Committee (CHAC), said: “We are very appreciative to CHC for organizing today’s breakwater inspection, given how much it has been discussed at our Advisory Committee meetings and in the Cowes community as a whole. To go out to the breakwater and hear from the contractors how it has been built, and see at first hand the level of technicality and the scale of the undertaking, was a positive and worthwhile experience, and has given all of us a better understanding of the project for when we are talking to people in Cowes.”

Cowes Harbor Master, Capt. Stuart McIntosh, said: “I would like to thank our contractors Boskalis Westminster for this morning’s breakwater site visit. It was very useful and informative for our Advisory Committee representatives, who have been, and continue to be very engaged with CHC throughout the development of this project.”

Capt. McIntosh added: “This new breakwater, along with the next phases of our harbor infrastructure, the extension to the Shrape and new Eastern Channel, are the key elements to achieving the Commission’s primary objective of providing a sheltered harbor environment for the benefit of all harbor users and stakeholders.”

Contractor Boskalis Westminster continues to make good progress with the installation of the rock armor protection to the breakwater. In spite of recent bad weather causing some delays to rock barge operations between Cherbourg and Cowes, barge load 17, out of a scheduled 18 or 19 loads is due to arrive in Cowes Harbor towards the end of this week. Rock armoring to the eastern end of the breakwater is already complete at a height of 6.7 meters above Chart Datum.

Practical completion of the breakwater is due in the third week of October with removal of the barge dock piles and contractor de-mobilizing in early November.

The Homes and Communities Agency (HCA) has indicated that the East Cowes development is progressing well and the developers are now planning on commencing work on the construction of the proposed Victoria Marina in the winter of 2016 and towards spring 2017. The dredging of the new marina will most likely be carried out at the same time as the dredging of the harbor’s new Eastern Channel.

A seasonal restriction of carrying out dredging works in the winter months only, due to the summer growing season of the protected eelgrass beds on the Shrape, means that the next phases of the harbor infrastructure works (Eastern Channel dredge and Shrape extension) will also likely commence in the autumn/winter of 2016 to 2017, aligning with the HCA’s plans for the East Cowes development.

Hydrodynamic engineers ABPmer, lead consultants for all marine elements of CHC’s Cowes Breakwater Project and the HCA’s East Cowes regeneration project, have successfully completed the construction and verification of a new and technically advanced regional tidal model that will provide the platform and basis for the local Solent and Cowes model. Additionally, it is expected that the local model will be completed within the next couple of weeks.

CHC has ensured that each stage of the development process for this new local model has been fully scrutinized by an independent expert modeler; furthermore, the commission is currently considering alternatives for independent expert scrutiny and oversight of the final calibration reports.

The next stage will see ABPmer use the new model to review the impact of the breakwater and optimize the harbor’s tidal flows and sedimentation regime in the design of the next phases of harbor infrastructure (Eastern Channel dredge and Shrape extension).

To feed into this process, it is also planned to undertake a further campaign of detailed tidal and sedimentation monitoring in the harbor, including sedimentation sampling and the deployment of fixed multi-function monitoring devices, as well as the possible use of drone video imagery.

The modelling results, reports and recommendations, are currently anticipated for April or May 2016, with further stakeholder consultation also planned before any final decisions are made on the next stages of harbor construction. 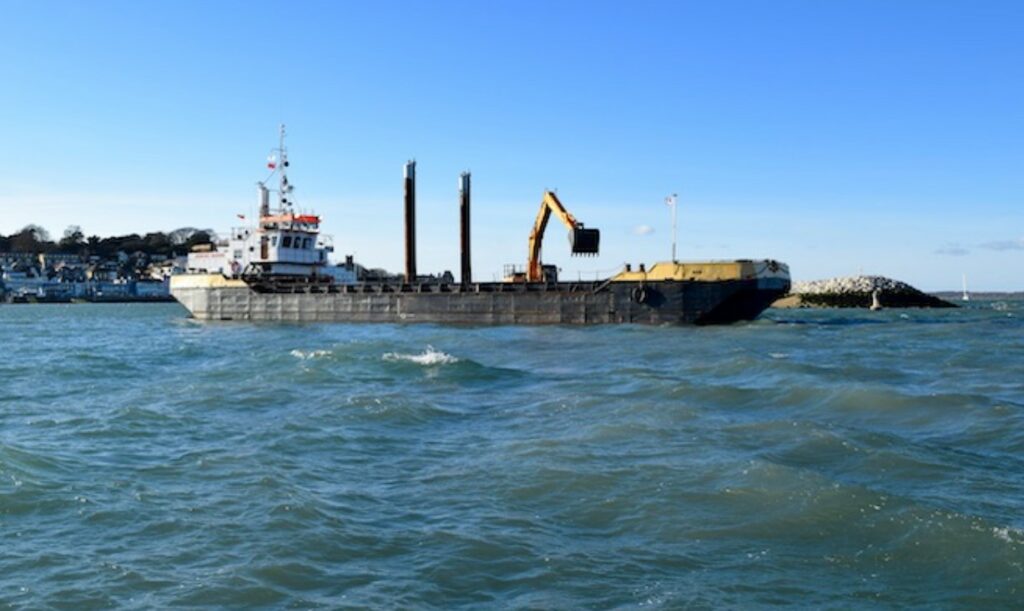