Turbidity plumes are stirred-up sediment which can be transported long distances by currents. Understanding the full spatial and temporal variability of turbidity, whether from natural causes such as tidal currents and waves or from anthropogenic activity such as dredging, can be costly if done with in-situ monitoring. Typically, in-situ monitoring, although generally more precise, will be limited both temporally (from the time of installation and onwards) and spatially (point measurements). Furthermore, it requires mobilisation and ongoing maintenance of the equipment.

Satellite-derived turbidity data on the other hand, provide a reliable and cost-effective synoptic overview of the variability of turbidity across both space and time, without the need for field deployment. By accessing image archives, satellite-based mapping can also retrieve historical turbidity levels and extents going back a decade or more. These attributes can offer a considerable advantage when trying to understand sediment transport and the potential impacts on benthic communities, especially over large and/or dynamic areas.

Recognising the essential value in this capability NQBP, through a project led by Port and Coastal Solutions (PCS), contracted EOMAP in 2019 to undertake satellite-derived turbidity monitoring before, during and after annual maintenance dredging works at the Ports of Weipa and Hay Point in Queensland.

Andrew Symonds, Director of PCS commented, ‘‘We have utilised satellite-derived turbidity data in several projects and have found it to be a valuable resource. The satellite data can be used to provide an understanding of the natural turbidity and how this varies spatially and temporally depending on the metocean conditions.  In addition, the data can also be used to determine the spatial and temporal variability in turbidity plumes resulting from activities such as dredging or from the propeller wash erosion of large vessels.”

NQBP was granted a 10-year Commonwealth permit, issued by the Great Barrier Reef Marine Park Authority (GBRMPA), to undertake sustainable management of maintenance dredging at the Port of Hay Point in existing navigational channels. The approved Dredge Material Placement Area (DMPA) for relocated sediment was 6 km north of port operations. The Trailing Suction Hopper Dredge (TSHD) Brisbane completed the program during a 33-day period between March and May 2019.

To maintain safe and navigable depths for port users, the TSHD Brisbane and Oranje undertook the dredging program within the Port of Weipa with placement at the Albatross Bay DMPA, over 40 days between June and July 2019. It was a much more extensive operation than previous years due to several significant weather events over the preceding wet season, including three tropical cyclones and a prolonged tropical low, that resulted in widespread natural resuspension of sediment and three times the highest annual sedimentation volume measured previously. This made it especially important to try and capture the complete picture of sediment dynamics in the area, something which the three turbidity loggers deployed could likely not provide through the point measurement time-series.

For the retrieval of satellite-derived water quality data, the physics-based Modular Inversion Processing System (MIP) developed by EOMAP, is applied to multispectral satellite imagery at varying pixel resolutions. This sensor-independent approach includes all the relevant steps to guarantee a robust, standardised and operational retrieval of water quality parameters such as turbidity, chlorophyll-a, harmful algal blooms and trophic states, which in turn provide insights into the dynamics of inland and marine waters, at both local and global scales.

Both dredging programs also included extensive in-situ monitoring data, including real-time water quality loggers and benthic habitat and infauna surveys. “When the satellite data is combined with in-situ water quality measurements it can be possible to identify when/if the turbidity at specific measurement sites is elevated due to anthropogenic activities such as dredging.  Satellite-derived turbidity data can therefore be used to provide extremely useful data to support a range of different projects including natural sediment transport assessments and monitoring associated with dredging”, explained Andrew Symonds.

The Hay Point program was completed successfully in trying weather conditions, with the dredging and relocation of ~353,740 m3 of sediment. Satellite data showed that turbidity over the area, pre, during and post dredging, was predominantly due to the natural resuspension of bed sediment attributed to strong tidal currents and energetic wind/wave conditions.

At Weipa, where more than 2.4 million m3 of sediment was dredged and relocated, satellite-mapped plumes were visible and remained for multiple dredge cycles but remained close to where they were generated (dredged channels and DMPA sites). The turbidity map series also showed that some of the apparently elevated levels of turbidity in the wider area were not originating from the dredging activities, and instead attributed to natural processes. The satellite data furthermore provided enough detail to show that propeller wash from the dredgers resulted in the resuspension of some fine-grained bed sediment when sailing to and from the dredging and DMPA sites.

Figs/video: Turbidity maps from each site and video of TSHD Oranje in action at Weipa. 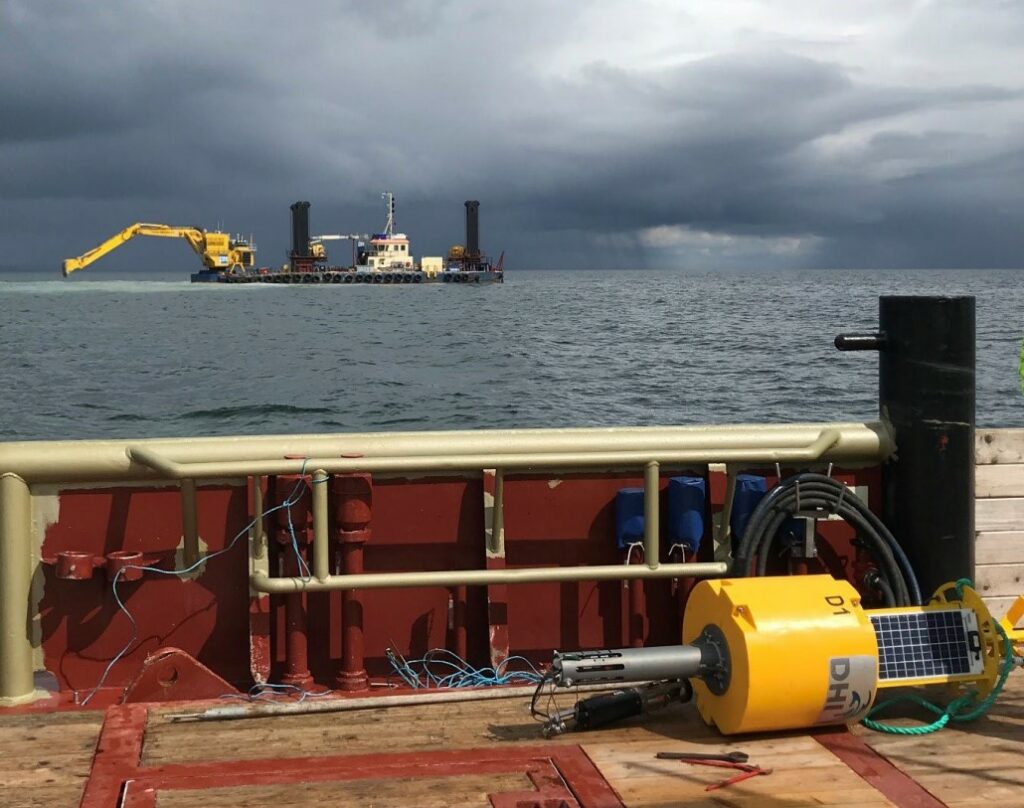 OSIL dredge monitoring buoys for the Baltic Pipe project
Posted: about 1 month ago
Wrapping up another dredging campaign at the Port of Weipa
Posted: 1 day ago
IHC Dredging presents operations monitoring on its Beavers
Posted: 2 months ago
Advertisement
Related jobs