Flemish Minister for Mobility and Public Works, Lydia Peeters was recently in Kallo, in Port of Antwerp, to inspect works on a major component of the Nieuwpoort storm surge barrier currently under construction by the Agency for Maritime Services and Coast (MSC).

23.5 metre wide, 42.1 metre long and five metre high, that is the size of this concrete threshold that was under construction at Kallo over the past few months. This threshold will soon be installed in the harbour channel at Nieuwpoort between both abutments of the storm surge barrier. Later, it will hold the steel barrier in normal, open position.

According to the minister Lydia Peeters, the construction of the storm surge barrier is unique in Belgium. “When I see the threshold lying there, then the transport alone can be considered a real feat. Many different parties worked together to get the threshold safely at its final destination.”

Benny De Sutter, CEO Herbosch-Kiere: “Since the works were performed in our premises in Kallo, we have the privilege of monitoring its progress on a daily basis and seeing it grow. That was a special experience for our people, here at the office. The activities on this impressive and gigantic structure went very smoothly and we are proud of our colleagues who devoted their efforts in a flexible and professional manner over the past period. We are absolutely ready tor this adventurous journey to the final destination of the threshold in Nieuwpoort.”

Installing the concrete threshold is a major milestone in the construction of the storm surge barrier. The MSC Agency launched the works in the spring of 2018.

In the Nieuwpoort harbour channel, both concrete abutments and guide walls were built and the trench for the laying of the threshold was excavated.

This autumn, construction works will start for the bypass drains. They will ensure that the spring tide flow rate never exceeds three knots.

Then, the steel barrier still needs to be installed, as well as the mechanical parts and the fenders, and the service building will be installed on the abutment on the right bank.

The project should be completed in 2025. 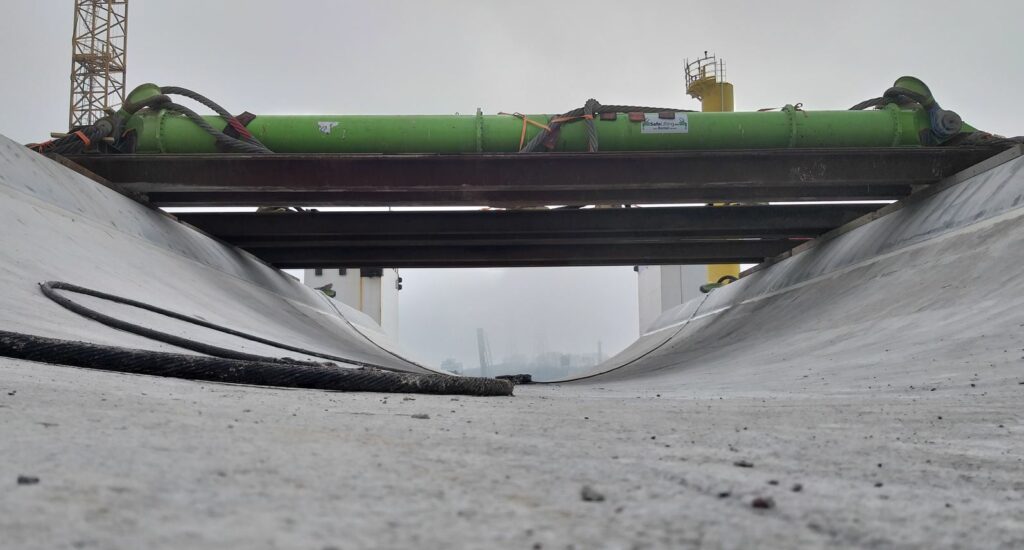