The Joint Venture Nordsee Nassbagger- und Tiefbau Gmbh – GeoSea NV, both of them members of the Belgian dredging, marine engineering and environmental Group DEME, has been awarded two different contracts for prepiling and installation works to construct both the EnBW Baltic 2 wind farm, 32 km north of the island of Rügen, and the Trianel West Borkum II wind farm, 45 km north of the East Frisian Island Borkum in German waters.

These new contracts confirm the growing importance of GeoSea as a specialized player in the segment of offshore wind farm construction.The accumulated contract value for these projects is 454 million €, of which 263 million € is for DEME.

The Joint Venture Nordsee – GeoSea – Hochtief AG and EnBW Erneuerbare Energien GmbH have signed a contract for the installation of 80 Siemens wind turbines, each with a capacity of 3.6 megawatts and a rotor diameter of 120 m. to create the offshore wind farm EnBW Baltic 2. Value of the contract is € 382 million. 50 percent of this amount will go to DEME as member of this joint venture.

EnBW Baltic 2 (previously Kriegers Flak) is Germany’s second commercial offshore wind farm in the Baltic Sea. It will be located approximately 32 km north of the island of Rügen in the western Baltic and cover an area of approximately 27 km2 . With its 80 wind turbines, each rated at 3.6 MW, EnBW Baltic 2 will have a total capacity of 288 MW. The offshore wind farm will generate 1,200 gig watt-hours of environmentally-friendly power annually for approximately 340,000 households and reduce CO2 emissions by 900,000 tons. Baltic 2 will be about 6 times bigger than Baltic 1 and is scheduled to come on line in 2013. EnBW has invested in excess of one billion euros in this project.

While the first turbines are currently being installed on monopiles for the Baltic 1 wind farm, the 80 Baltic 2 turbines will be placed by the JV Nordsee – GeoSea NV – Hochtief AG partly (39) on monopiles and partly (41) on jackets, depending on the quality of the sea bottom and the water depths encountered. Their € 382 million contract covers the design, supply and installation of the monopile and jacket foundations and the installation of the 80 Siemens turbines. The offshore work will start in early 2012 and is to be completed mid 2013. The joint venture will be using one of the world’s most effective special platforms for wind farm construction. It will help to anchor the foundations, which weigh up to 670 tonnes, to the floor of the sea at depths of up to 44 meters.

The award to the JV Nordsee – Geosea – Hochtief follows a European tender bidding procedure, which included design and technical proposals as well as a financial bid.

GeoSea, member of the Antwerp based Belgian dredging, marine engineering and environmental Group DEME, has acquired worldwide experience in the engineering and installation of drilled monopiles, prepiling and subsequent installation of jackets for nearshore and offshore wind farms amongst others for projects such as the Beatrice wind farm in UK waters, the Alpha Ventus wind farm in German waters, the Walney and Ormonde wind farms in the Irish Sea (ref. as well the references attached). Moreover, their partnership with a strong German partner Hochtief AG and the availability in the GeoSea fleet of eight large and recently built self-elevating platforms for dedicated employment on wind farm construction projects, has enabled them to win this important new contract in German waters.

The Joint Venture Nordsee Nassbagger- und Tiefbau GmbH -GeoSea N.V has been awarded by Trianel Power Windpark Borkum GmbH & Co.KG a new contract covering prepiling foundation works and the installation of 40 Areva wind turbines, each with a capacity of 5 MW, for the construction of phase I of the 400 MW offshore windfarm Borkum West II in the Exclusive Economic Zone (EEZ) Germany in the southern North Sea. Trianel is a German electricity provider majority owned by German public municipal utilities. GeoSea’s contract has a value of € 72 million.

The project concerns the installation of one of the first large-size offshore wind farms in the German Exclusive Economic Zone (EEZ) of the North Sea. The wind farm area itself (55 km2) is located about 45 km north of the East Frisian Island Borkum. The planned total capacity will be up to 400 MW, and given the predicted wind resources of around 3,500 equivalent full load hours it would result in a yearly net production of approximately up to 1,300 GWh. The Project will contribute to German and European targets for renewable energy (reduction of CO2 emissions and diversification of energy supply). The wind farm will be operational in 2013.

JV Nordsee – GeoSea’s contract includes prepiling of 40 foundations for tripod jackets in depths up to 40 m. In all 120 foundation piles will have each an impressive diameter of 2.5 m. In recent times, GeoSea has built strong references in this type of foundation activities, amongst others on the Alpha Ventus wind farm in German waters, and the Walney and Ormonde wind farms in the Irish Sea. They are actually one of the specialist foundation contractors that has applied on this scale and with specific in-house developed techniques the accurate large-size piling for offshore windfarm foundations in deep waters. These techniques, which have been further optimized by GeoSea during recent assignments, are increasingly being applied for offshore windfarm construction.

Included in Nordsee – GeoSea’s contract as well is the installation of the 5 MW Areva wind turbines. Again, GeoSea has given full proof of their abilities to install these very large turbines from their multi-purpose self-elevating platforms and vessels. Actually, they have been the first marine engineering contractor ever to install wind turbines of this size on the C-Power.

Thornton bank offshore wind farm off the Belgian coast. The availability in the GeoSea fleet of eight large and recently built self-elevating platforms for dedicated employment on wind farm construction projects, along with their proven execution methods have enabled them to win this new contract as well in German waters. The actual works on site are scheduled to start mid 2011 and to be completed by end 2012.

GeoSea is a fast growing company specialising in complex offshore maritime projects. The company is part of the Belgian DEME group, a world leader in the field of dredging, marine engineering and environmental operations. GeoSea is active around the globe. At Costa Azul, Mexico, GeoSea recently drilled oversized monopiles, with a diameter of 3 m, in hard rock for the construction of an LNG-terminal. The company also placed the 5 MW turbines required for the first phase of the C-Power offshore wind farm at the Thornton Bank off the Belgian coast. These 316 tonnes turbines were hoisted to a height of 95 metres above sea level. GeoSea already cooperated in the installation of 15 European wind farms at sea, including the Alpha Ventus project in German waters in 2009. GeoSea is currently positioning monopiles of up to 650 tonnes at the Walney wind farm, and at the Ormonde farm in the Irish Sea it is placing jacket piles at a depth of 30 metres with centimetric accuracy. GeoSea’s jack-up platforms include Goliath, Vagant, Buzzard, Zeebouwer, Halewijn, Tijl II, and Kobe..They are assigned to projects around the globe, including on the North Sea, the Middle East and Australia. Furthermore, a new jack-up vessel “Neptune” is currently under construction for GeoSea. With this eighth jack-up vessel, that will outdo the previous platforms in every respect, GeoSea aims at further strengthening its position in the leading group of companies that specialise in building wind farms at sea. GeoSea business also covers more traditional activities such as soil investigation, drilling of large diameter monopiles, and high-tech directional drilling as was successfully executed under the wreck of the sunken car carrier Tricolor.

The Belgian dredging, environmental and marine engineering group DEME was established in 1991 from the merger between Dredging International and Baggerwerken Decloedt. A global market leader, the Group diversified from dredging operations and reclamation to hydraulic engineering projects at sea, services to the oil and gas companies, wreck clearance, installation of offshore wind farms and environmental activities such as soil remediation, sludge recycling and revalidation of brownfields. The Group owns one of the most up-to-date, highly technological and versatile fleets for dredging and hydraulic engineering, with vessels and ships of all sizes and for any operational area. DEME employs more than 3,700 people, The Belgian Group is implementing more than 50 projects simultaneously around the world. DEME’s will generate a turnover of € 1.8 billion this year. End June 2010, DEME’s order portfolio valued in excess of € 2.1 billion. 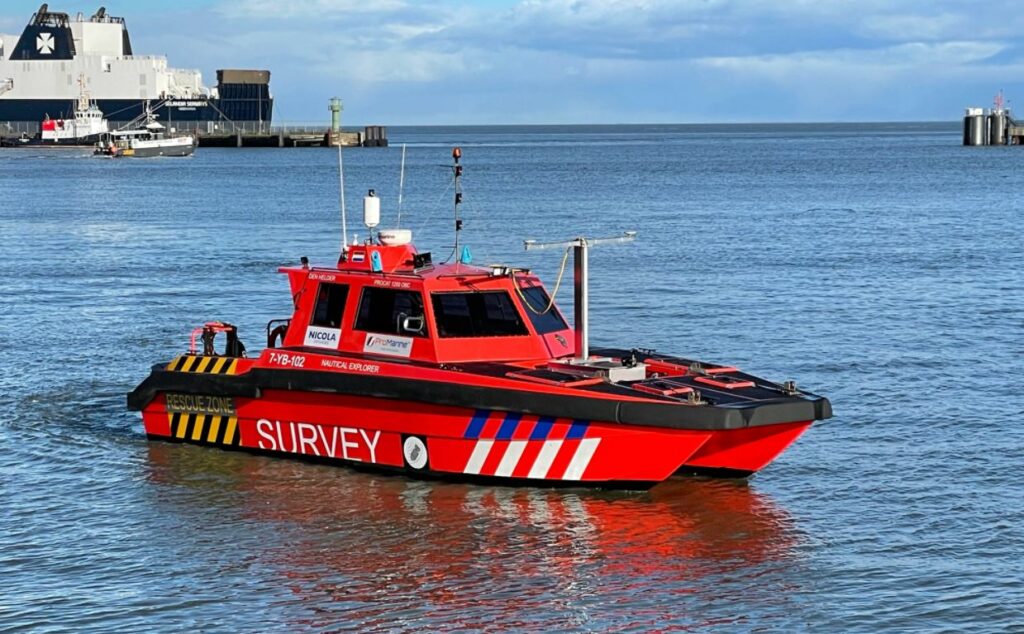