The Belgian dredging, marine engineering and environmental group DEME ordered in June of this year, at the IHC shipyards, a new trailing suction hopper dredger with a hopper capacity of 11.650 m3 and a powerful self-propelled sea-going rock cutter dredger with a total installed output of 28.000 kW.

The keel laying of both vessels took place on the 15th of November 2010, allowing the start of the physical construction. The Breughel will be built at the shipyard in Krimpen aan de IJssel. The Ambiorix will be built in Hardinxveld.

The new trailing suction hopper dredger (TSHD) will be named “Breughel”. This new ship, with a hopper capacity of 11,650 m3 and a carrying capacity of over 18,000 tons, fits perfectly into DEME’s trailing suction hopper dredger segment which incorporates the “Brabo” and “Breydel”, added to the fleet in 2007 and 2008 respectively. The ship will have a port side 1,200 mm suction pipe and will be able to dredge at depths of up to 43 m.

The “Breughel” was designed for dredging in both deep and shallow waters, enabling the ship to offer extensive flexibility. Even with a maximum load, it will only have a draught of 8.151 m on dredging mark. This also enables DEME to reconfirm that its fleet of dredging vessels offers the best carrying capacity/draught ratio in the dredging industry. This is an absolute trump card in terms of multi-use applications, from deployment for maintenance work in deltas to land reclamation projects with long distance transport.

The ship combines all of the latest developments in dredging technology and will be equipped with a pump-ashore installation for direct shore delivery (rainbowing) of the dredged material. During the design of this trailing suction hopper dredger, a great deal of attention was paid to minimising CO2 emissions and this will allow the ship to be labelled as having the best CO2 emissions per m3 in its class and, subsequently, to it being awarded a Green Certificate.

With its total installed power of 28.000 kW, the new rock cutter dredger “Ambiorix” positions itself as one of the most powerful cutter dredgers in the entire dredging industry. The ship is self-propelled and will therefore be able to travel around the World autonomously for DEME. The “Ambiorix” will also become the new flagship for the DEME cutter fleet and will follow the positive tracks of the rock cutter dredger “D’Artagnan” which was commissioned to DEME in 2005. The new ship will carry the very latest technology and will constitute a further evolution of the successful “D’Artagnan”. The “Ambiorix” will be fitted with a barge loading system. The flexible spud system will allow operations in larger swell, allowing higher productivity and working in the most challenging conditions. The ship will be equipped with a so-called ‘moonpool’ which enables surveying to take place during dredging and which, therefore, will increase the efficiency of the dredging process. The “Ambiorix” will have the in-house developed D.I.O.R.I.T.E. system installed. Sophisticated artificial intelligence controls the dredging process via this system, optimising efficiency and productivity. This extremely powerful cutter suction dredger will have a huge range in terms of dredging depth, from shallow dredging at a depth of 6 m to a maximum of 35 m, and will be able to efficiently tackle all types of soil, including soft rock.

Both vessels are part of the investment programme 2008 – 2012 of the DEME Group, in which 15 new vessels will be added to the DEME fleet. Seven vessels of this series have already been launched. Among the 8 vessels under construction we have, aside from the ‘Breughel’ and the ‘Ambiorix’, the 5000 m³ gravel dredger ‘Victor Horta’, that will be launched on 15 December, 2010, the fall pipe vessel ‘Flintstone’ with a carrying capacity of 19,000 tons, the self-propelled sea-going cutter dredgers ‘Al Jarraf’ and ‘Amazone’, each with a total installed power of 12,860 kW; the mega trailer ‘Congo River’ with a hopper capacity of 30,000 m3 and the jack-up vessel ‘Neptune’.

The Belgian dredging- and environmental group DEME is a conglomerate of companies, of which the roots were established 150 years ago. The Group is specialised in capital and maintenance dredging; port construction and port expansion; services for the oil & gas industry; wreck removal; deep-sea activities; the construction of offshore wind farms; and a whole range of environmental activities- from water purification to sludge recycling, to soil remediation and the treatment of heavy or contaminated sediments. DEME has a modern and varied fleet of 90 large dredging vessels and approximately 200 auxiliary vessels. DEME employs 4,000 people. The Group works worldwide – in 2010 projects are being executed in 50 countries, spread over the 5 continents. The current investment programme in high-tech material for a total amount of 1.5 billion €, will enable DEME to face the future with an ultra-efficient and very modern fleet. The turnover for 2010 is expected to reach ca. 1.8 billion Euro. 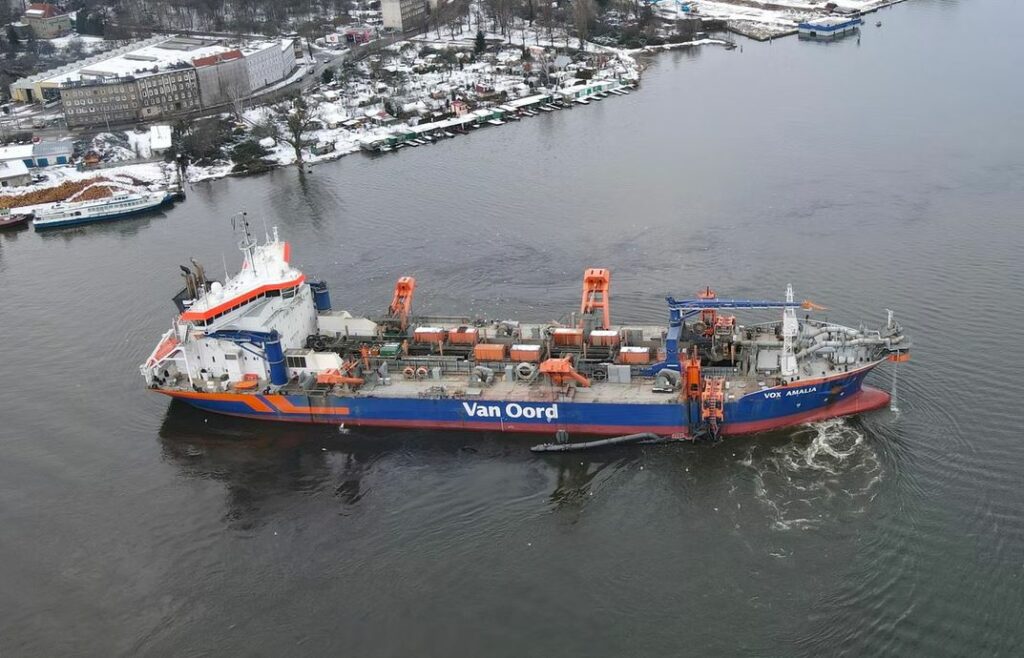