Demag Cranes Group Continues to Expand Its Business in Turkey

The Demag Cranes Group is continuing to expand its business in the port technology segment in Turkey. After receiving purchase orders in the previous year for a total of nine new Gottwald Mobile Harbour Cranes, in the current year the company has also for the first time received an order for supply of two Portal Harbour Cranes in Turkey.

As in previous years, high-performance cranes have particularly contributed to the pleasing order situation. The customers include new and existing customers of Demag Cranes, who use the cranes predominantly for container handling. The two most recently ordered Portal Harbour Cranes are designed for professional bulk handling and will handle coal. With all cranes, the operators benefit from the energy-efficient electric drive concept.

Thomas H. Hagen, Member of the Management Board of Demag Cranes AG and Chief Operating Officer (COO) points out: “Turkey is a strategically important intersection between Europe and Asia and a growth market for Demag Cranes. Our technology leadership is pointing the way on the Bosporus reinforced by the constantly increasing demand for our products.“

Since the market launch in Turkey in 2006, Gottwald’s Model 7 of Generation 5 has developed into a best-seller. With six of a total of nine cranes sold, in 2010 this crane model was responsible for a major share of orders received by Demag Cranes in Turkey.

As a member of Gottwald’s major crane family, optimally tailored to the requirements of terminals in Turkey, Model 7, with lifting capacities of up to 150 tonnes, is ideally suited for intensive, fast container handling on vessels up to Post-Panamax class and for handling heavy and project loads.

Moreover, in 2010 three Model 6 cranes were sold. Depending on the variant, these cranes have loading capacities of up to 125 tonnes and are also optimally suited to intensive container handling.

Bülent Sandal, Demag Cranes’ representative in Turkey and owner of the company Eksen Makina Servis Ticaret S.A., points out: “Since 1997, almost 60 Gottwald Mobile Harbour Cranes have been sold in the Turkish market. In the past five years, we have been able to supply 23 Model 7 cranes alone. Gottwald cranes can now be found in all major Turkish ports, particularly in the greater Istanbul area with the Marmara Sea, the link between the Black Sea and the Mediterranean. With Gottwald cranes, Turkish terminals are adding to their crane portfolio with high-performance cranes featuring a particularly long lifetime and universal characteristics.“

At the beginning of 2011, for the first time Demag Cranes was able to sell two Portal Harbour Cranes in Turkey. The two Model 8 cranes in the variant G HSK 8424 B are based on the Mobile Harbour Crane. The customer Marmara Sea Power Plant will use the cranes for handling imported coal for a power plant in the vicinity. Commissioning is planned for summer 2012.

Both four-rope-grab cranes for professional and raw bulk handling have 63-tonne grab curves and can be used up to Capesize class. From the slewing ring upwards, the cranes have proven Mobile Harbour Crane technology. The portals are adapted to the individual conditions in the port with a view to rail loading capacities, clearance and rail width.

For many terminal operators, an important factor affecting the decision in favour of Gottwald products is the electrical drive concept. It enables the crane to be operated from external sources, which not only makes operation cheaper, but also more environmentally friendly. Today, every second Gottwald crane operating in Turkey is powered by electricity from the terminal’s mains.

All harbour cranes from Gottwald can be basically equipped for operation by external power sources – either direct at the factory or by a subsequent upgrade. When power from the port mains supply is used, the on-board Diesel generator is bypassed and the effectiveness of the drive train increased. This reduces the operating and maintenance costs and prevents exhaust fumes in the terminal. With new purchase orders, Turkish customers now insist from the beginning on the use of external power sources. And customers who have previously operated their cranes with Diesel generators have recently converted to using power from the port mains supply.

The Demag Cranes Group is one of the world’s leading suppliers of industrial cranes and crane components, harbour cranes and terminal automation technology. Services, in particular maintenance and refurbishment, are another key element of the Group’s business activities. The Group is divided into the business segments Industrial Cranes, Port Technology and Services and has strong and well-established Demag and Gottwald brands. Demag Cranes sees its core competence in the development and construction of technically sophisticated cranes and hoists as well as automated transport and logistics systems in ports and terminals, the provision of services for these products and the manufacture of high-quality components.

As a global supplier, Demag Cranes manufactures in 16 countries on five continents and operates a world-wide sales and service network that is present in over 60 countries through its subsidiaries such as Demag Cranes & Components GmbH and Gottwald Port Technology GmbH, agencies and a joint venture. In financial year 2009/2010, the Group, with its 5,711 employees, generated revenue of EUR 931.3 million. Since August 2011, the Terex Group in the United States (www.terex.com) has held a majority share in the company. 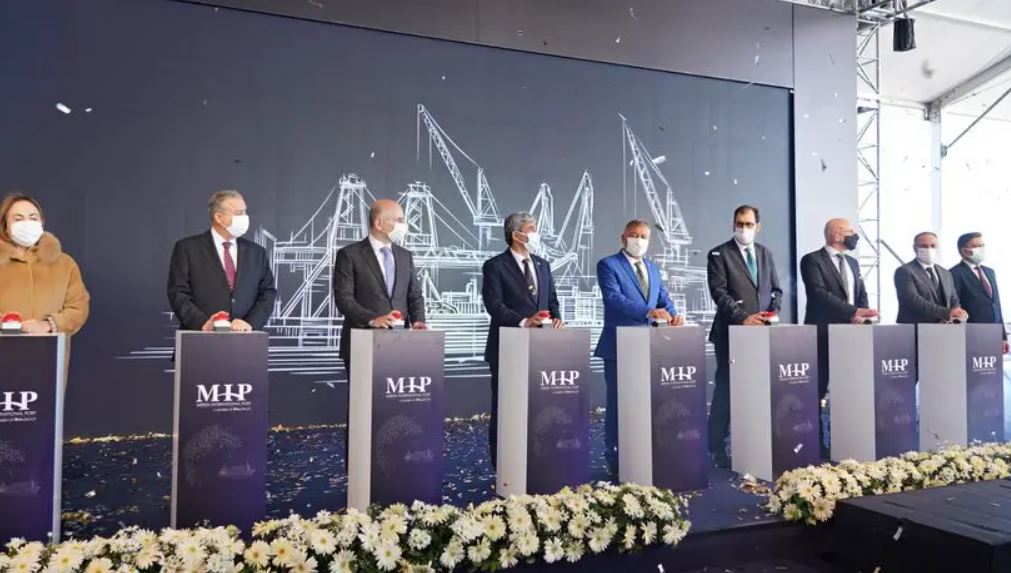